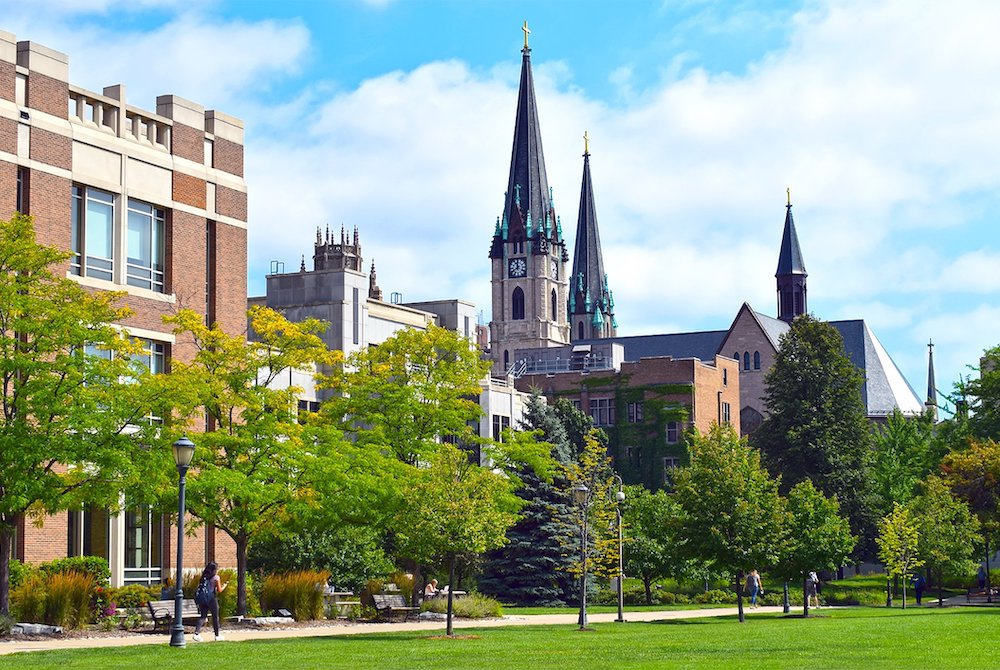 Students voting in a referendum at Marquette University last week issued a resounding endorsement for the Jesuit school to divest its $693 million endowment from stocks in the fossil fuel industry, and now await a response from school officials.

In a nonbinding vote at the Milwaukee school on April 22, Earth Day, undergraduates overwhelmingly supported a five-year divestment plan, with 87% voting yes. Roughly 24% of the 7,000-plus undergraduate student body took part in the vote.

Because it was nonbinding, the referendum does not require any action or response from university officials. The student senate at its May 3 meeting is expected to consider its own recommendation legislation on divestment. Should that pass, an official notification would be sent to the Marquette administration.

"Climate change and environmental injustice have never been more urgent, but student support for climate action has never been stronger," Fossil Free Marquette, the student campaign behind the referendum, said in a statement. "We know that we will succeed, because failure is not an option; we have no choice but to stand up for the planet and its vulnerable inhabitants."

Joseph Miscimarra, a senior and co-founder of Fossil Free Marquette, told EarthBeat that the referendum vote "affirms that Marquette students care about this issue."

"As the younger generation, we're seeing that this is an issue that's going to really impact us in the future and our children's future and our grandchildren's future," said Maddie Kuehn, a sophomore and member of Fossil Free Marquette. She added, "Time is ticking. We need to do something about it now. We can't keep putting it on hold."

Along with divestment, the referendum called for greater transparency about the endowment's investments and for the university to revise its investment policy and partake in shareholder engagement while it divests, in an effort to influence companies away from the use of fossil fuels.

In a statement to EarthBeat, Marquette said it had "reduced" direct investments in fossil fuels, such as oil and gas, to approximately 1%-2% of the endowment as of the end of March, though it didn't clarify when that reduction began. The remaining holdings, it said, "diversify the university's investment portfolio to help protect the endowment from unexpected shocks to the economy."

The university added that over time it has shifted investments toward clean energy, "based on market trends and opportunities," and that its investment managers follow the Principles of Responsible Investing, including reducing the endowment's carbon footprint.

"The Office of Finance and Division of Student Affairs will continue to engage in open dialogue and work closely with student leaders as the university seeks additional ways to manage the endowment in ways that are environmentally responsible," the university statement said.

Jesuit Fr. James Voiss, Marquette vice president for mission and ministry, said in an email that the school's mission demands that it "continuously strive for social justice," including addressing climate change. He repeated the call Pope Francis made in "Laudato Si', on Care for Our Common Home," his 2015 encyclical on the environment and human ecology, "to reject a magical conception of the market, which would suggest that problems can be solved simply by an increase in the profits of companies or individuals."

"Considering our mission and the inherent duty we have to the planet," Voiss said, "it is heartening to me that Marquette has long prioritized socially responsible investing, including keen attention to environmental issues. It is likewise encouraging that we have had greater opportunities to reduce investments in fossil fuels."

"We believe that Marquette is really not caring for the whole person if they're investing in companies that are degrading the environment for future generations."
—Joseph Miscimarra, a senior and co-founder of Fossil Free Marquette

In the weeks leading up to the referendum, members of Fossil Free Marquette met with President Michael Lovell and the school's chief investment officer, Sean Gissal. Miscimarra characterized the discussions as "really productive," even as there's been pushback, and said they hope to meet with both again and possibly the board of trustees.

"They have been receptive to student feedback," he said.

In those meetings, the students put forth both financial and moral arguments for divestment, including the disproportionate impact climate change has on people of color and developing countries. The referendum and a campaign video highlight Marquette's values as a Jesuit institution, including cura personalis, or care for the whole person, and care for creation.

"We believe that Marquette is really not caring for the whole person if they're investing in companies that are degrading the environment for future generations," Miscimarra said.

"You can't say that you uphold these [Jesuit values] while also giving money to corporations that are destroying the communities that you say that you serve," Kuehn added.

The campaign video includes a clip from Francis' TED Talk in October, where he urged "a progressive replacement, but without delay, of fossil fuels with clean energy sources" and recommended divesting from companies "that do not meet the parameters of integral ecology."

A similar call was made by bishops at the 2019 Synod for the Amazon. And in the past year, the Vatican has twice issued documents that recommend fossil fuel divestment: in implementation guidelines for Laudato Si' issued in June, and as one of the benchmarks in its Laudato Si' Action Platform for Catholic institutions, which is set to formally launch in May. The head of the Vatican Bank told EarthBeat last May that the bank does not maintain fossil fuel investments.

Along with social media posts and petitions, Fossil Free Marquette solicited support for the referendum from members of the student senate and student organizations on campus, including the Black Student Council, the Midnight Run service program and both the Marquette College Democrats and Marquette College Republicans, which in the fall participated in a roundtable discussion about climate change and policies to address it.

"I think that no matter if you're a Democrat, Republican, independent, you know, climate change is gonna affect all of us," Kuehn said. "And I think our younger generations understand that this is something that we all need to pay attention to, regardless of our political affiliation." 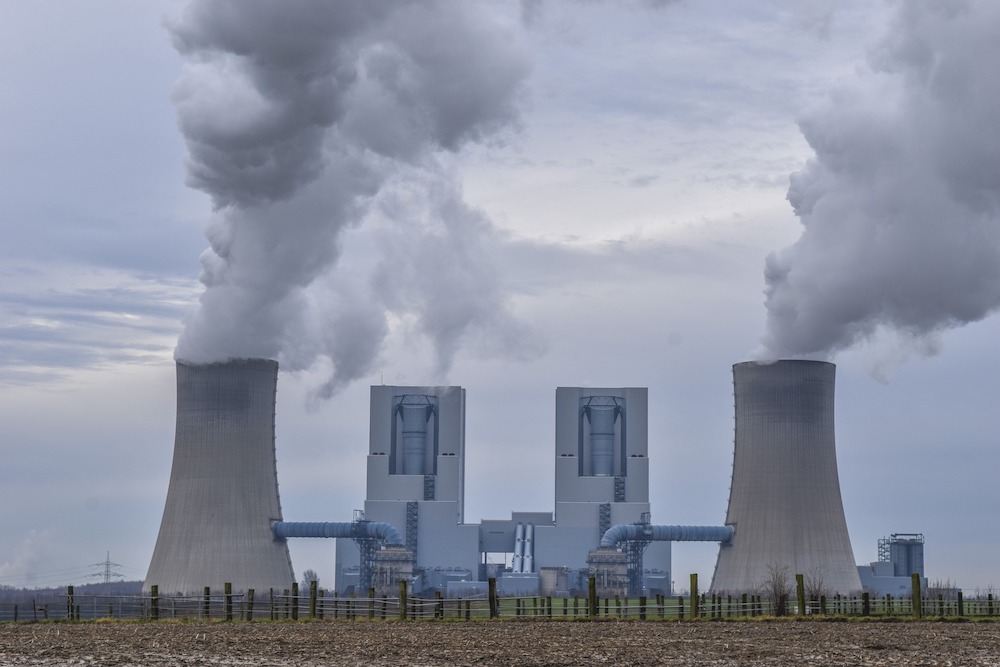 Jame Schaefer, a theologian who teaches ecological ethics at Marquette, told EarthBeat she was "delighted" that the divestment referendum passed with substantial support. While she is not involved in the campaign, several students who are drew upon her course in developing the referendum.

Schaefer called fossil fuel divestment "a moral responsibility," but added it is only "one step" and should be accompanied by other efforts to address climate change, including personal actions, along with increasing energy efficiency and the use of renewable energy on campus.

"It's not the only step, but it's an important step," Schaefer said.

Only a handful of Catholic universities have publicly divested their endowments from fossil fuel holdings. They include the University of Dayton, Seattle University, Georgetown University and Creighton University, the most recent, which announced full divestment at the end of 2020.

On the flip side, years-long campaigns at the University of Notre Dame and Boston College have been unsuccessful, leading Boston College alumni in December to ask the Massachusetts attorney general to investigate their school on the grounds that it was violating its own mission and fiduciary obligations by continuing to hold fossil fuel stocks.

Students at Marquette modeled their campaign on the one at Creighton, where students passed a referendum in November 2018 with similar levels of support.

Initially, the Jesuit school in Omaha, Nebraska, declined to divest, citing potential negative impacts. Within four months, however, it announced a partial divestment plan, and on New Year's Eve 2020 it committed to fully divest within a decade. In its announcement, the university directly pointed to the Vatican's Laudato Si' implementation guidelines.

Schaefer said the divestment push at Marquette is not the first such effort there, but it is the one that's advanced the furthest.

In 2015, Marquette signed onto the St. Francis Pledge, which outlines ways for Catholics to reflect and act on climate change. Students with Fossil Free Marquette argue that that pledge commits the university to taking steps like divestment to address climate change. The university's sustainability plan, created in 2018, sets goals of reductions in emissions, energy use, water use and waste.

During the spring 2020 semester, the theologian Schaefer sought to jumpstart a campus shift to renewables with a course on energy use and climate change that she taught with a physicist and a social scientist. After studying the scientific and theological foundations, student teams were tasked with finding specific ways in which Marquette could use energy more efficiently and what renewable sources may be feasible.

That last step was interrupted when the campus closed because of the coronavirus pandemic, but Schaefer hopes a future iteration of the course can continue the work.

"Divestment is just part of the story. And it's a step, but [there is] much more to be done at Marquette University," she said.

A version of this story appeared in the May 14-27, 2021 print issue under the headline: Marquette students call for fossil fuel divestment.