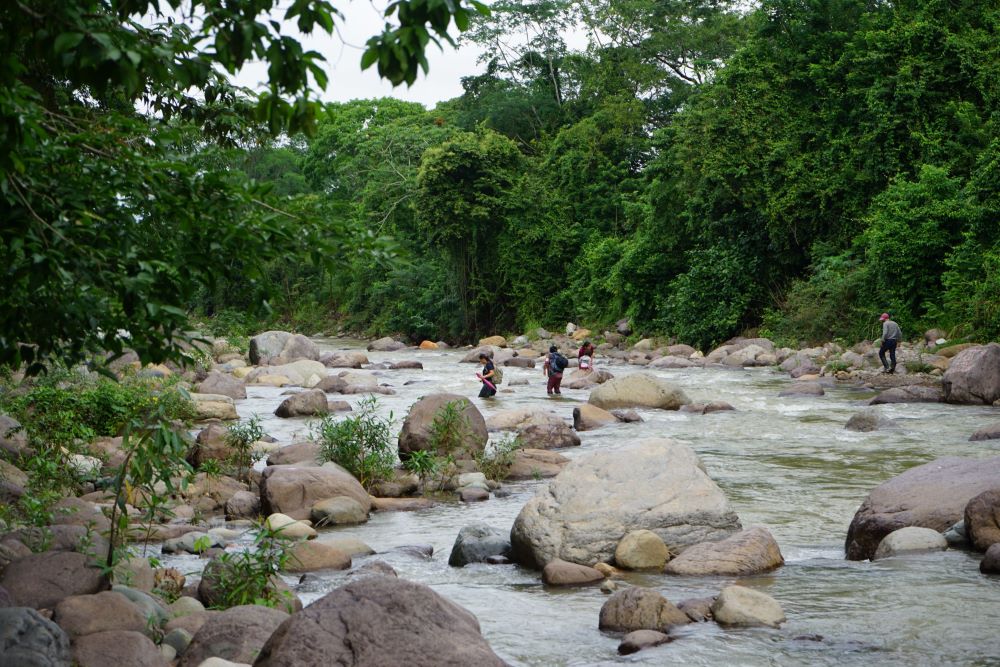 : The Guapinol River trickles down the Carlos Escaleras National Park. About a decade ago, Inversiones Los Pinares received approval to build an iron oxide mine in the park. (SHARE Foundation/Mark Coplan)

The Río Guapinol that streams through the Bajo Aguán valley in northern Honduras has long been a source of drinking, bathing, cleaning, irrigation and cooking water for the surrounding community in Tocoa.

In the last few years, the river has also provided an education: how to resist an international mining operation that they say contaminates the river in the name of development; how to confront a seemingly compromised justice system when that resistance goes awry; and — for the women in particular — how to become leaders of a movement upon the indefinite imprisonment of their husbands and sons.

Vilma Cruz raised her five children using the river, including a son who wound up spending almost two and a half years in jail for protesting the mining as part of the Guapinol 8, a group whose 2019 arrests and long detentions drew international outrage.

"We don't feel at peace because our water has been endangered," she said. "Now, when I go to the river, I feel my chest swell, like I'm not free."

A mine emerges, a community responds

About a decade ago, Inversiones Los Pinares, formerly the Honduran EMCO Mining Company and based in Tocoa, applied for a concession to build an iron oxide mine in the protected Carlos Escaleras National Park. Then-President Juan Orlando Hernández authorized the request in 2013, a decision locals said was made without following protocol of consulting residents of the area.

The open-pit mining project was upstream of the Río Guapinol, a channel that stems from the larger Río Aguan, a river that flows through tropical mountains from the Atlantic on the northern side of the Central American country.

When the Río Guapinol in 2018 started to turn a chocolate brown, locals took that as a cue to act against Inversiones Los Pinares. 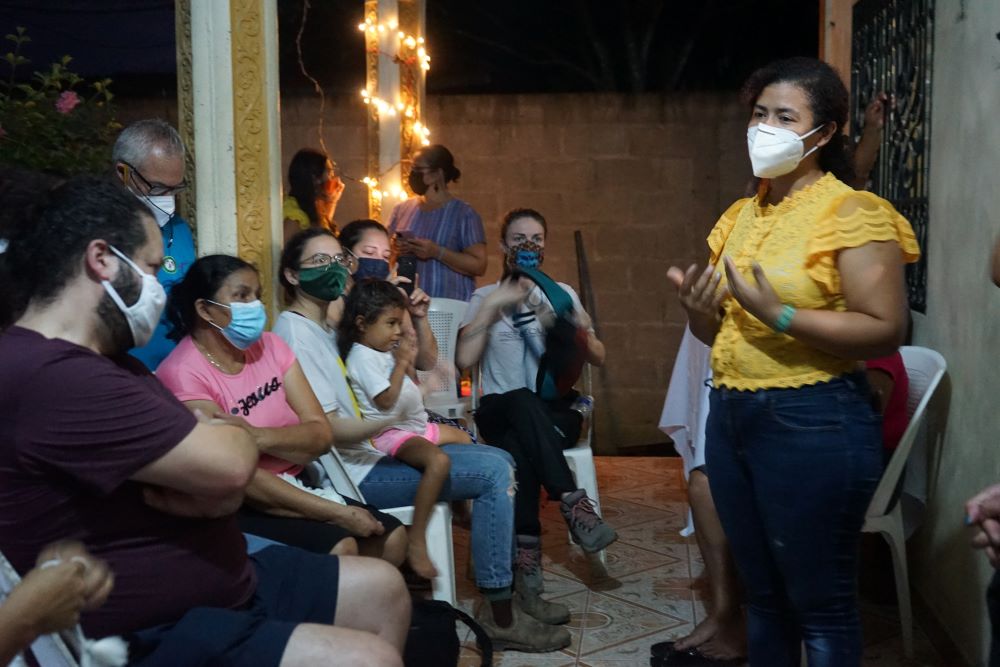 Juana Zúniga, community leader and life partner of José Abelino Cedillo, one of the Guapinol 8, speaks before a SHARE delegation, friends and family about mining of the river and hardships of her partner's detainment. (SHARE Foundation/Mark Coplan)

Guapinol Resiste, the local community's movement in response to the mining, said in a 2020 report that even before mining began, the construction of the facilities and roads had polluted both the Guapinol and San Pedro rivers, affecting 14,000 residents who rely on the water for consumption and domestic purposes.

"Losing the river would mean buying water, and you can't buy water for everything," said Leonel George, who serves on the Municipal Committee for the Defense of Common and Public Goods, founded in 2018 in response to the mining project.

The river, he added, is "closely linked to life and the existence of everything that surrounds us," noting that the committee's concern goes beyond the effects that contaminated water would have on human beings to the river's surrounding forests and biodiversity.

"We cannot exist if we lose the water, the river [because] the cost of living would be too expensive to maintain domestic chores," he said. 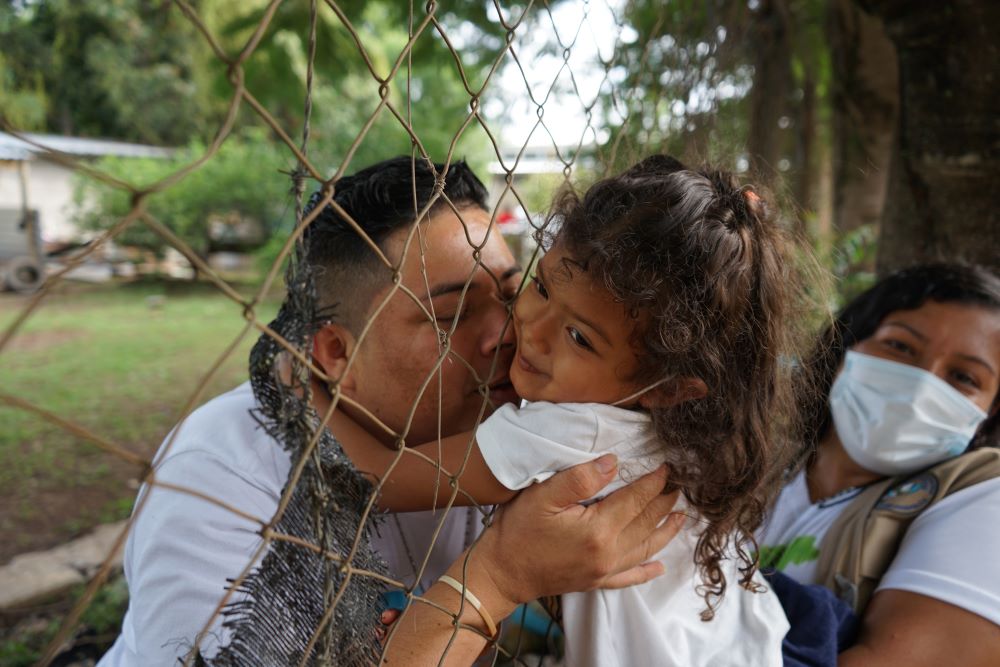 : One of the Guapinol 8 greets his daughters for the first time in nearly a year. (SHARE Foundation/Mark Coplan)

The committee, which serves Guapinol as well as those in the greater Colón department (or state), inspired community mobilization. They organized public complaints, resistance campsites along the riverbanks to block the company's access to the river, and international solidarity campaigns, including support from Amnesty International and the United Nations Human Rights Council. The committee also coordinated legal challenges to both the mining concession and disregard for the human and environmental rights.

"Those were serious crimes that they imposed on us, and they were false, calling us a criminal organization, an illicit association of usurpation, damage, unjust deprivation of liberty," George said. (The Guapinol human rights defenders are part of the CIVICUS #StandAsMyWitness campaign, which advocates for the rights and release of human rights defenders.)

The local Catholic Church, he added, has been a source of support, with priests, bishops and parishes from nearby dioceses demonstrating solidarity by participating in the committee's protests and activities. And while there are few sisters in the immediate area, he said many have traveled from neighboring cities and departments to accompany them in their struggle.

'To not fight is to be complicit in the corruption.'
— Juana Zúniga

For environmental defenders, a deadly landscape

According to the environmental and human rights watchdog group Global Witness, Honduras has become one of the deadliest countries for environmental defenders, with the 2016 murder of activist Berta Cáceras drawing international attention to threats and intimidation against Honduran environmentalists. In 2019, Honduras claimed the highest number of defenders killed per capita.

"This is us fighting for our life... Sadly, the state should be the one fighting for our livelihoods, our lives, but in Honduras, we're criminalized and condemned for defending something that is ours being destroyed," said Juana Zúniga, community leader and life partner of José Abelino Cedillo, one of the Guapinol 8.

"To not fight is to be complicit in the corruption," she said.

Inversiones Los Pinares did not respond to Global Sisters Report's request for comment. Their Facebook page, however, highlights a number of positive social effects as a result of their development: creating thousands of jobs, health and social work programs, and the construction of schools. 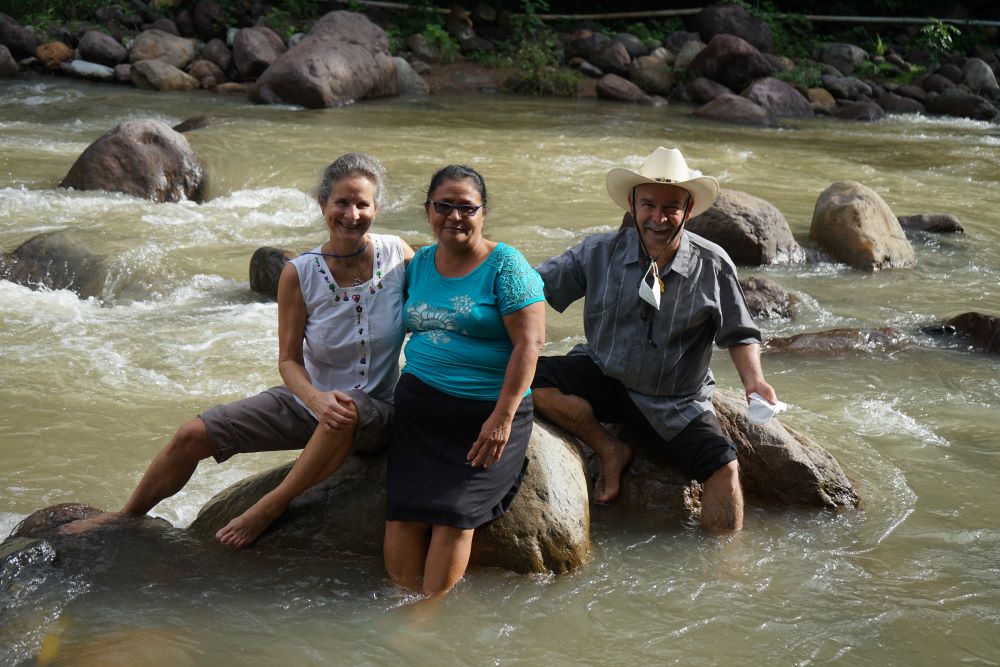 In November 2021, democratic-socialist President Xiomara Castro — wife of former president Manuel Zelaya, who was removed from office by the military in 2009 — was elected as Honduras' first female president after 12 years of conservative National Party rule.

In the months following her election, her government announced a ban on open-pit mining, joining Costa Rica and El Salvador in this move. The proposed restrictions would only apply to new projects and would not retroactively revoke already obtained licenses to mine, including for Inversiones Los Pinares. Castro's proposal has faced opposition in the Honduran congress, with critics labeling the move unconstitutional. Still, activists have celebrated the president's move, which has slowed requests for new mining permits.

The role of the Municipal Committee for the Defense of Common and Public Goods, George said, is to ensure the voice of the community is heard, though he added that the mining company not only struck an agreement with the government and military, but also bought support from the community. 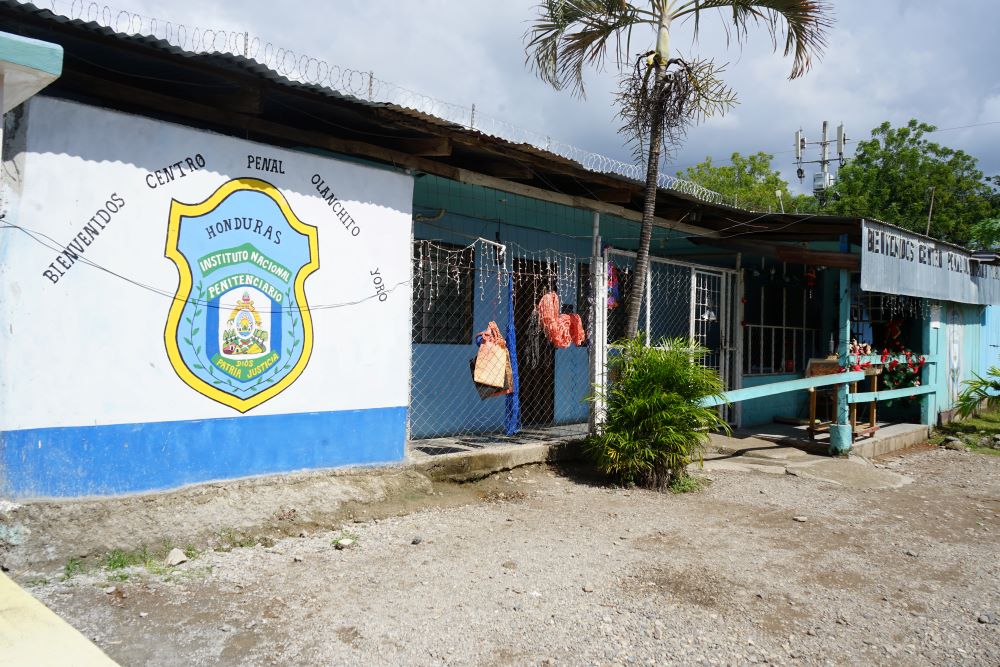 Most of the Guapinol 8 were detained at the Olanchito Penitentiary Center. They were detained nearly two and a half years there, accused of aggravated arson and damaging private property after a three-month protest to block a mining company from accessing their roads. (SHARE Foundation/Mark Coplan)

Among the 32 criminal injunctions issued to committee members, the extralegal jailing of eight men shifted the community's attention from fighting for the river to fighting for the release of their husbands, sons and friends.

In August 2019, the committee organized an encampment to block the mining company from accessing their roads for three months. What began as a peaceful protest turned into a violent confrontation: Military police eventually deployed tear gas and live ammunition, killing one civilian and injuring eight others.

The group was ultimately jailed for 914 days. After a trial supporters called a sham, six of the men were convicted and two acquitted on Feb. 9. The next day, the Honduras Supreme Court threw out the case, ruling that the judge who ordered the men's detention did not have the jurisdiction to do so.

Catholic development agencies, like the Ireland-based Trócaire, were among those calling for justice for the eight men. The Sisters of Mercy, who have had a presence in Honduras for 60 years and had been advocating on behalf of the Guapinol community before the arrests, were among those who celebrated the Guapinol 8's release.

"People around the world stood with them because protecting water is not a crime. They deserve reparations," they tweeted Feb. 11.

Now, the Guapinol 8 and activists close to them "have to be careful, because the company is not happy with them," said Jose Artiga, executive director of SHARE Foundation, which organizes regular trips to El Salvador and Honduras for Americans who wish to see the realities of life there, often related to migration and the environment. Global Sisters Report participated in the December 2021 delegation to San Pedro Sula and Guapinol.

"All this time they were in jail, [Inversiones Los Pinares] was still mining... The threat of poisoning the river has not gone away," Artiga said.

Juan López, representative of the Committee for the Defense of Common and Public Goods, told Radio Progreso that the activists' next step is advocate for the revoking of Inversiones Los Pinares' mining contracts, the environmental license and the exploitation and exploration permit.

Artiga said the community is "physically exhausted; they didn't have an ounce of energy to continue fighting, so when [the Guapinol 8] were released, it was a break to rest." 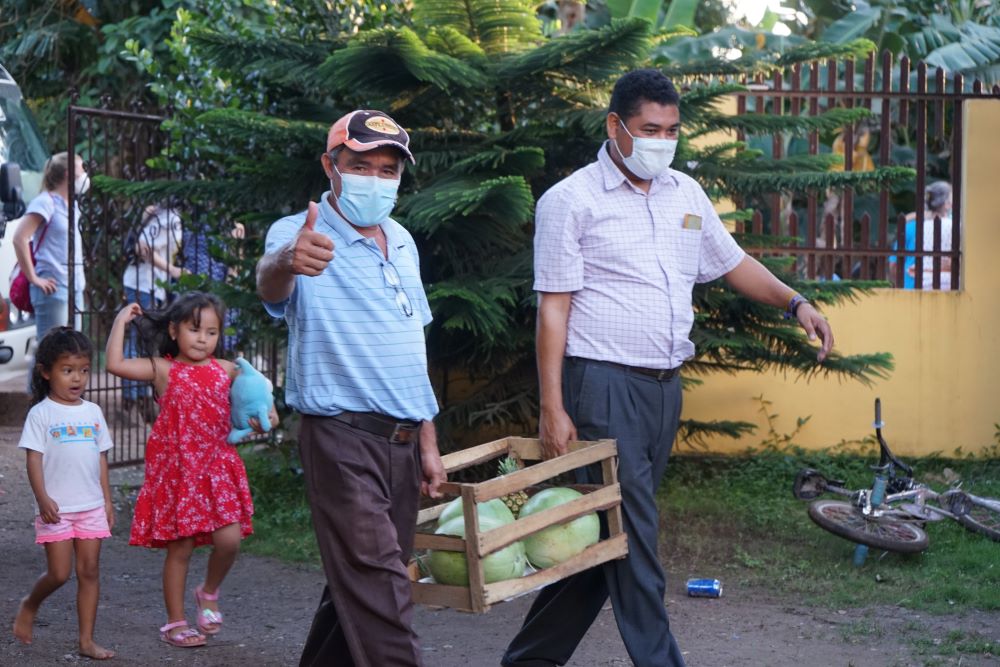 He added that some of the men were breadwinners for their families, several of whom fell into poverty once the men went to prison.

"The company achieved a lot of their objectives by putting [the Guapinol 8] in jail, which was scaring the community from mobilizing against them. 'We have the power to put you in jail' — that was the message," Artiga said, stating the popular belief that the company and government worked together to discourage protesters. "I wouldn't be surprised if some of them leave the country for safety reasons, or move to another part of the country."

If somebody leaves the country, "they are not a threat anymore. They are not organizing and planning the next steps to remove Los Pinares from their sacred mountain, to save the Guapinol River, the rivers of Honduras and the rivers of the world."

An education in resistance

Resistance to the mining operation was not entirely at a standstill during the Guapinol 8's detainment.

The wives and mothers of the detainees sustained the movement, assuming leadership by organizing and speaking out against the mining operations while working through the judicial processes.

"I feel like we started in the preschool stage, and perhaps we are entering the elementary phase" when it comes to defending the Guapinol River, Adilia Castro, a member of the Municipal Committee, said at a meeting of a women's group the SHARE Foundation delegation attended in December. "It is up to us in this space, with our experiences, to learn and discover ways to fight."

Castro also said she believes this fight is permanent, as they're challenging "an economic and extractive model" that destroys communities and territories alike.

"We're [from] a territory that has no experience in this type of conflict in the area of ​​mining; it is a new problem for us, and we have faced it without knowing how it was done, without knowing who were the ones behind all this or how it had been set up.... This school has no end. There is no graduation or degree."