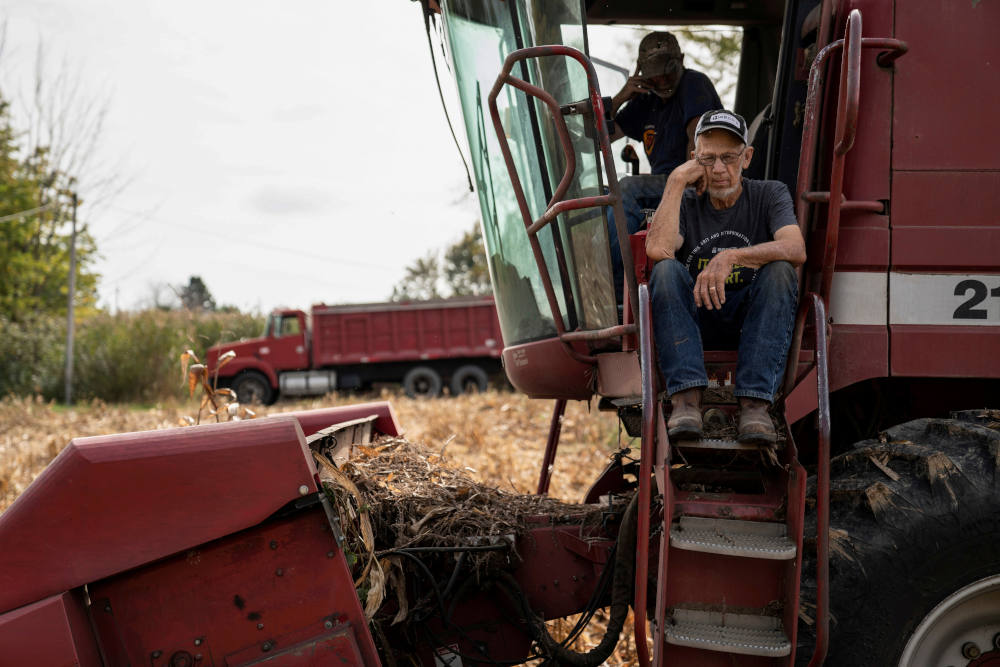 Dale Nething, 86, of Ravenna, Ohio, waits on the steps of his combine Oct. 11, 2021, as his son Don Nething, 62, troubleshoots the harvester after it breaks down. (CNS photo/Dane Rhys, Reuters)

The current farm bill doesn't expire until 2023, yet already advocates are lining up their arguments to assemble the kind of farm bill they want to see next year.

In some circles, advocates were probably strategizing about the 2023 farm bill not long after the current version was signed into law in 2018.

The farm bill is like a car. A century ago, the bill set policy for farmers and ranchers, while Ford still offered its Model T in any color — so long as it was black.

Today, automobiles are still with us but they are radically different, as they are adorned with lots of lights, safety equipment, fatter tires, pollution control devices, computer assists, stereo sound and even electric engines to replace the internal combustion engines that have dominated for the past century.

Likewise with the farm bill. While its character is essentially the same, it's an altogether different look. Some now call it a "farm and food" bill, not always in that order, or a "farm and food and energy" bill.

"The 2018 bill was 807 pages long," said James Ennis, executive director of Catholic Rural Life, based in St. Paul, Minnesota. He added that about three-fourths of the funding included in the bill goes to nonrural purposes.

Ennis said the 2018 farm bill had key gains for farmers. One example was a conservation stewardship program to help farmers and ranchers conserve and care for the land. He said he hopes to see "robust gains" in funding for that initiative in the 2023 farm bill.

While Ennis said he did not expect to see any major reductions in programs or funding in the 2023 version, "I hope to see some more expanded and enhanced disaster programs for farmers and ranchers to bounce back quickly from severe weather events. We've had droughts in parts of the country that have negatively impacted farmers."

Ennis voiced his expectation that the farm bill will have enough incentives in it to keep farmers "farming far into the future by investing in the number of farmers so that we can continue to have young farmers coming into agriculture and agriculture production, so those investments are really key."

Regardless of which party is control of either chamber of Congress following the midterm elections in November, Ennis said another item he wants to see is "continued investment in regional food systems" that focus on value-added producer grants. "We want to see continued investments," he said, "so that farmers can tap into the local markets."

Despite the lack of complaints about the 2018 farm bill, it hasn't exactly been a rosy four years for farmers. The coronavirus pandemic did a number on rural life as it did city life — drought and other weather not conducive to farming struck some regions of the country; the war in Ukraine cut off an important supply of fertilizer for fields; and for famers, like for everyone else, inflation has been stubborn.

"Inflation has increased prices for fuel and inputs for farmers and ranchers," Ennis told Catholic News Service in a Sept. 28 phone interview. "It's putting a lot more pressure on them. They are facing some more headwinds than they were in 2018."

Challenges aren't limited just to farmers, as spelled out during a Sept. 21 program at the Capitol, "A Catholic Approach to Hunger, Nutrition and the Farm Bill."

The program, jointly sponsored by Catholic Relief Services and the U.S. Conference of Catholic Bishops, featured the voices of people who minister on the front lines with desperately hungry people both in the United States and throughout the world.

Sara Lindsay, chief program officer for Catholic Charities West Virginia — the largest social service agency in the state — said children there have a higher rate of developmental delays due to nutritional deficits.

West Virginia, Lindsay added, is first in drug overdose deaths and accidental deaths, second in cancer-related deaths due to coal and tobacco use, eighth in suicides and last in life expectancy.

Some people in West Virginia are so poor — it's the most rural state in the U.S. — "they can't afford a vehicle or afford the gas to run it," Lindsay said. "People will wait to go to the pantry for a day they're going into town anyway."

West Virginia has food deserts, where fresh food cannot be purchased. "It's impossible to teach your kids to eat salads when the nearest grocery store is more than a county away," she noted.

Still, Lindsay said, West Virginia is "home to some of the hardest working and resilient people you'll ever meet." Catholic Charities, beyond distributing food at 15 pantries statewide, teaches people how to can fruits and vegetables — and how to bury them in their yard to preserve them even longer.

Farmers in some parts of the world have been devastated by drought, according to Dina Brick, a CRS senior technical adviser for food security and markets. Brick said Sept. 21 a famine declaration for Somalia was expected "any day now," while delayed rainfall has damaged farmers' livelihoods in neighboring Ethiopia. One farmer said his acres' yield "you could put into a sack," Brick said.

International food assistance programs found in the farm bill "protect the dignity of every living human person," Brick said at the forum.

The funds found in the farm bill "allowed us to provide cash transfers to provide food in the local market," she added, when food shipped from the United States was "no longer safe, easy or appropriate." She added, "It's important to fund long-term resilience programs so people are not stuck in back-to-back crises."

Brick said, "Imagine deciding which of your children eat, or whether to leave your home in search of food. Those are decision they have to make every day — and we have to make decisions, too."

During a question-and-answer session following her remarks, Brick said, "Climate is one of the main challenges of our times."

"In addition to meeting emergency needs right now, another critical part of this, which the farm bill allows and it needs to continue," is to foster "these investments that once were emergency programs," she continued, but to really do so "with an eye for resilience — looking at the whole food system, from producer to consumer, the environment, all the different parts that go into healthy food systems."