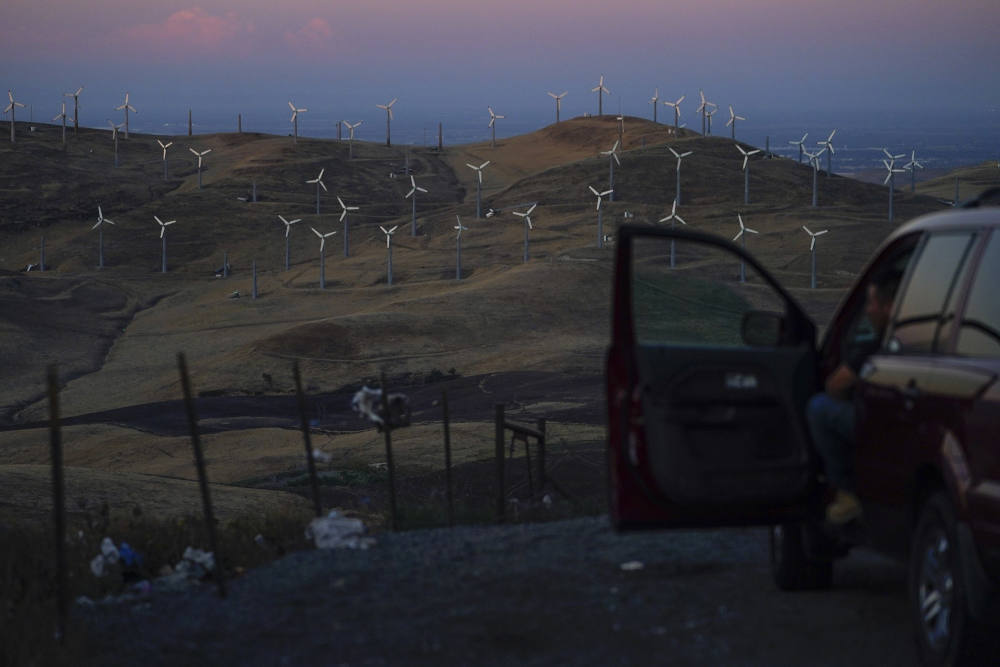 A man looks out at wind turbines in Livermore, Calif., Wednesday, Aug. 10, 2022. Congress passed a transformative climate change bill on Aug. 12. The crux of the long-delayed bill is to use incentives to accelerate the expansion of clean energy such as wind and solar power, speeding the transition away from the oil, coal and gas that largely cause climate change. (RNS/AP Photo/Godofredo A. Vásquez)

Last week Congress passed the most consequential climate change legislation the United States has ever attempted, designed to reduce carbon emissions by 40% and solidify America’s position as the world leader in the fight to save our planet.

Saving our planet is this generation's moonshot, and we have finally, and belatedly, achieved liftoff: The journey from the Mercury program's initial forays into orbit to Apollo's lunar landing was much shorter than the five-decade odyssey to this moment from the first warnings of what Daniel Patrick Moynihan called "the carbon dioxide problem," back in 1969, two months after the moon landing.

So here we go, but it's important to note that this week's liftoff was horizontal, not vertical. Our focus must turn now from outer space to inner space, from the planets and stars to the overflowing rivers and parched forests. But there is much that the prior moonshot can teach the current one.

One man who seems to realize this already is Ron Howard, the Oscar-winning director whose new film, "Thirteen Lives," brings us back to the tense early summer of 2018, when an international team of experts and volunteers joined forces to rescue a boys soccer team stranded in a flooded cave in Chiang Rai province, in northern Thailand.

As I watched, I couldn't help but see similarities to "Apollo 13," Howard's 1995 movie, in which, with teamwork, ingenuity and outside-the-box thinking, another skilled team was able to rescue highly trained astronauts from an infinite void, with no atmosphere, no climate and no possibility of sustaining life.

In "Thirteen Lives," the rescued are children imperiled by a supercharged atmosphere driven by a changing climate.

The Chiang Rai cave where the boys were trapped was flooded very early in what turned out to be a particularly extreme monsoon season throughout eastern Asia that year. Their rescue, though cause for celebration, was a Pyrrhic victory when we consider the deaths of so many climate change victims before and since, including those who died these past few weeks in rain-drenched Kentucky, fire-torched California and sunbaked Europe.

Earth, one senses, is angry at our hubris and is sending us a final ferocious warning before it all goes up in flames. 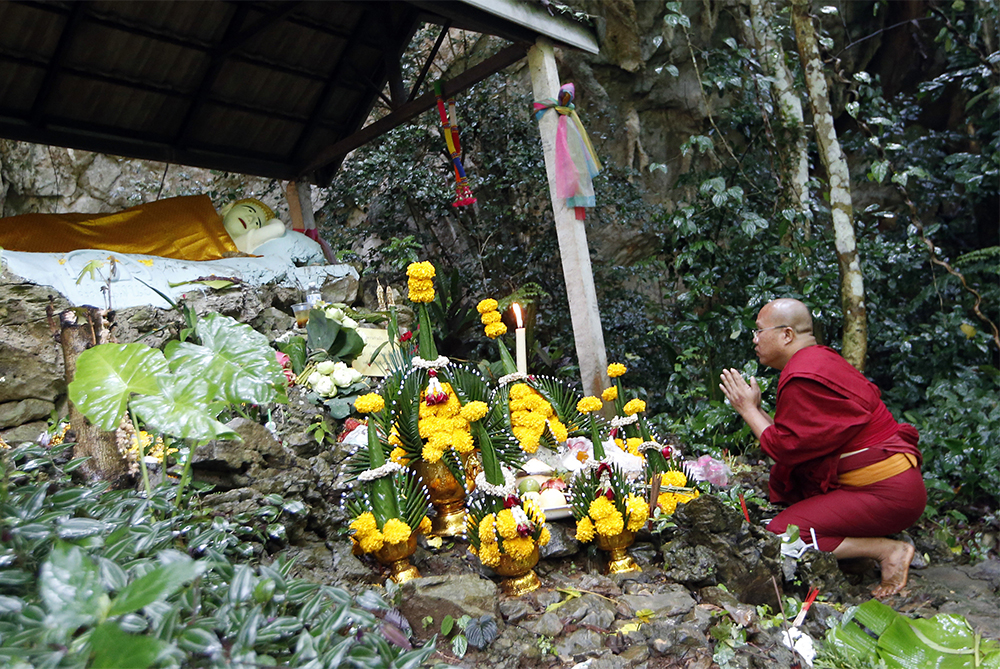 A Thai Buddhist monk prays for 12 boys and their soccer coach in Mae Sai, Chiang Rai province, in northern Thailand, on June 27, 2018. Rain continued to fall and water levels kept rising inside a cave in northern Thailand, frustrating the search for the boys and the coach who were missing in the sprawling underground caverns. All were eventually rescued. (AP Photo/Sakchai Lalit)

In Howard's new film, the wrathful rains are personified by the mythical princess Jao Mae Nang Non, also known as the "reclining goddess," whose image looms over the mountain and cave (that both share her name) where the boys were trapped. Legend has it that her ill-fated love met a tragic demise in that spot. Villagers make offerings to appeal to her for mercy, while the rains fall like tears from her grieving eyes. She is a constant, visible reminder that we have made a mess of our relationship with nature, and now we are paying the price.

Unlike last year's climate change film, "Don’t Look Up," the message of "Thirteen Lives" is that we need to look down, into the darkest fissures of the earth, the caves and sinkholes, the submerged rice paddies and gushing tributaries. Look down into the eyes of the princess.

"The heavens belong to the Lord, but the earth God gave over to us," the Bible's Psalm 115 reminds us. We need to fix what's in our backyard and not be distracted by the shinier objects above.

Curiously, both of Howard's rescue films have the number 13 in the title, which points to another shared lesson: Both the celestial and earthbound moonshots are profoundly spiritual missions, boosted by a fusion of humility and hope. "Who knows thirteen?" — Jews sing at the conclusion of the Passover seder. "Thirteen are the attributes of God," referring to the 13 qualities of mercy through which God governs the cosmos. Through these attributes, we can sense God's presence and the unity of all creation.

This summer, the James Webb Space Telescope enabled us to see galaxies being born and dying and light that was generated at the dawn of time, just after the Big Bang, 13 (yes, 13) billion years ago. In the Israeli media, the Hebrew word used for this Webb's-eye view of the universe was Ein Sof, which in the secular context means "infinity," but it is also a well-known kabbalistic name for God's most mysterious and unknowable essence.

When we gaze back through those 13 billion years and slip the surly bonds of time and space, we approach the face of God. The closer we come to seeing the beginning — and touching God — the more we recognize that we are not God, and the smaller we feel. That stunning vision from the heavens should fortify us with humility for the struggle that awaits; for back here on earth, the reclining goddess is growing impatient.

In the Talmud, 13 is also the age of responsibility. And what greater responsibility do we have than to take those God-like qualities of mercy and apply them to sustaining life here on our home planet? For while we look up and our Webb-enhanced view gets clearer and sharper, we look down and our view of what lies beneath us becomes muddier and murkier. As more sinkholes start to appear, the ground gives way and the waters rush in. The princess is begging us to act.

"Chiang Rai," the princess of the cave cries, "we have a problem!"

We need to summon the same dogged determination of Apollo 13 astronaut Jim Lovell and flight director Gene Kranz as we grapple with humankind's most intractable predicament: "From now on, we live in a world where man has walked on the moon," said Lovell. "And it's not a miracle, we just decided to go."

Kranz put it best as he wrestled with the unmanageable challenge of bringing the boys home:

"Failure is not an option."

Now the work can begin, at long last, thanks to the underwhelmingly named Inflation Reduction Act of 2022.

[Rabbi Joshua Hammerman is the spiritual leader of Temple Beth El in Stamford, Connecticut, and the author of Mensch-Marks: Life Lessons of a Human Rabbi and Embracing Auschwitz: Forging a Vibrant, Life-Affirming Judaism that Takes the Holocaust Seriously.]

Read this next: Faith leaders reassert critical role in confronting climate change ahead of Stockholm+50