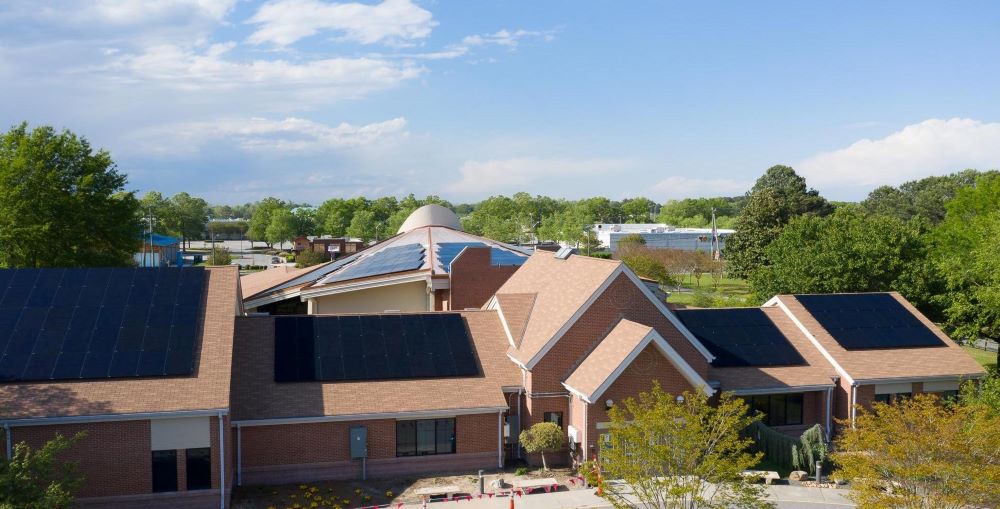 The Church of St. Therese in Chesapeake, Va., seen April 21, 2020, is one four churches in the Diocese of Richmond that had solar panels installed in 2020. (CNS/Catholic Virginian/Vy Barto)

A provision in the Inflation Reduction Act, signed into law this summer by President Joe Biden, not only increases the size of the tax credit for conversions to renewable energy but also makes nonprofit entities, like parishes, eligible to receive the tax benefits themselves.

The new program starts Jan. 1. Rules have yet to be published denoting how it will work.

Even without the rules yet in place, "we're pushing it ourselves," Dan Misleh, executive director of the Catholic Climate Covenant, told Catholic News Service. "Our Catholic Energies team is pushing it. It's going to make a lot more projects viable."

How many Catholic churches and institutions have gone green to date?

Parishes may be gung-ho over the prospect of installing solar panels, but "at a diocesan level it does need a buy-in from the bishop, that's for sure," Misleh said. "It would have to be approved by the chancery. It's a capital improvement. When we work (with parishes), we always want to mention that the bishop has to be bought in before you proceed. ... The bishop could say, 'No, we're not going to do that.'"

But nonparish institutions face no such intermediary, according to Misleh.

"There are religious communities in Illinois, outside Chicago," moving on this, he said. "We're doing a number of projects for the Passionists out of New York. We're talking to folks in Puerto Rico about residential solar projects."

In Florida, where most of the state's electricity is generated from coal-fired plants, a different kind of institution stands ready to help: a bank.

Its name, Climate First Bank, is a bit of a giveaway.

Established last year, it offers the customary range of banking services, but with a distinct mission: to issue loans to help borrowers mitigate the effects of climate change by going greener. 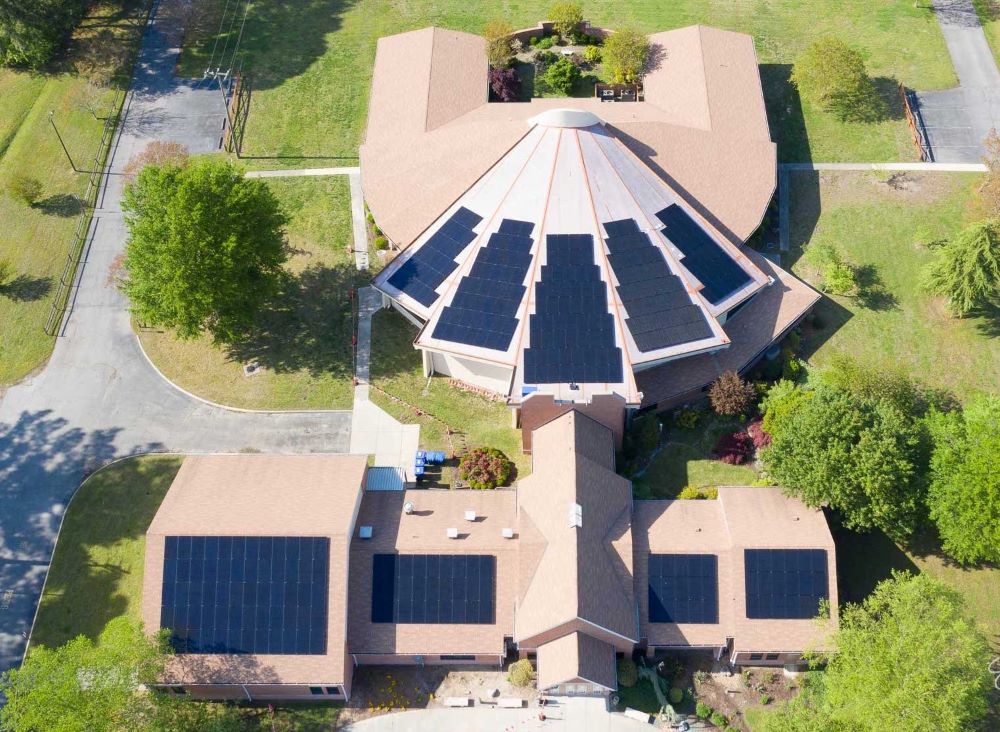 The Church of St. Therese in Chesapeake, Va., seen April 21, 2020, is one four churches in the Diocese of Richmond that had solar panels installed in 2020. (CNS/Catholic Virginian/Vy Barto)

Chris Cucci, senior vice president of Climate First Bank, told CNS in a Nov. 10 phone interview from Orlando, Florida, that 44% of its lending portfolio has been for such projects, primarily solar panels.

Since the Inflation Reduction Act's passage, "we've had a lot of inquiries from nonprofits already," Cucci said.

Why? First, the tax credit is back up 30% thanks to the Inflation Reduction Act. It had dropped to 26% during Donald Trump's presidency, and was slated to slide further. Also, by making nonprofits eligible for the tax credit, a nonprofit had to find a "tax equity investor" for the project. That is no longer necessary.

Under the typical terms set by Climate First, "the loan payment on that is $430 a month. If your $430 loan payment is less or the same as your power bill, then clearly you're benefiting," Cucci said. 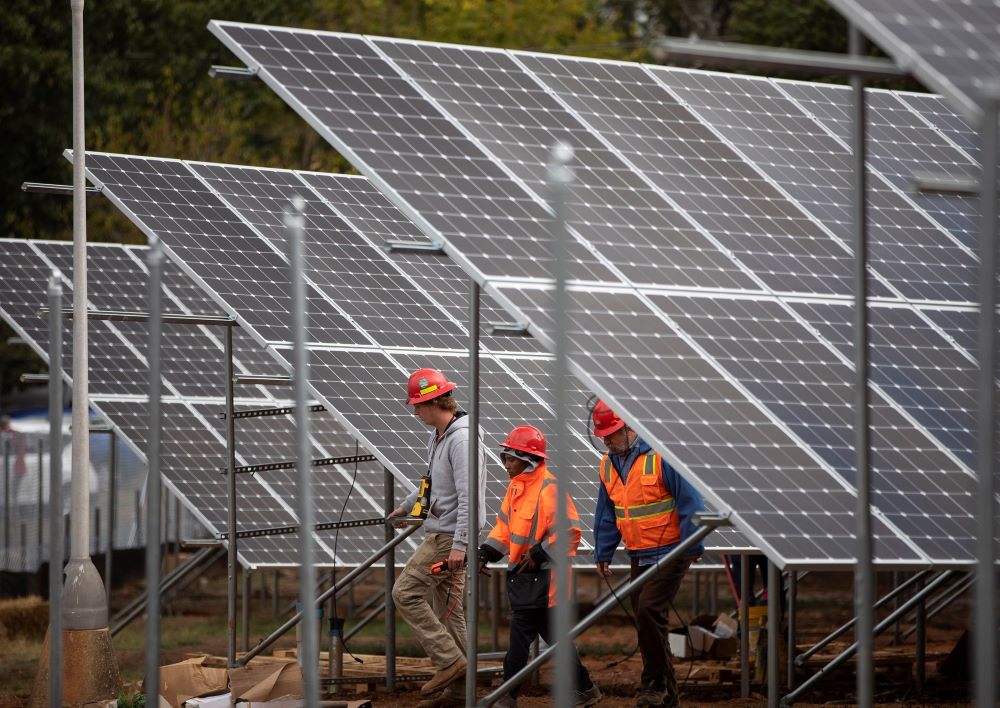 Workers in Washington are seen near solar panels Oct. 17, 2019, on the property of Catholic Charities of the Archdiocese of Washington. (CNS/Catholic Standard/Andrew Biraj)

While the state of Florida hasn't jumped into the green-energy spree, cities and counties there have, according to Cucci.

"If you're in the city of Orlando, where I am, we have a city-run utility," he said, and it "offers a lot of incentives to make your home more energy efficient. The goal is to try to offset your power bill as much as possible, to get to zero."

Climate First offers online loan applications. It takes five to seven minutes to fill it out, Cucci told CNS, and an individual can get an answer back in 30 seconds. When CNS inquired whether he meant to say "minutes," Cucci replied that seconds was correct.

The bank is opening an office in St. Petersburg, which it says will be certified platinum by LEED, an acronym for Leadership in Energy and Environmental Design.

"It will be our showroom," Cucci said. And in mid-2024, once it has been open for three years, Climate First Bank will be permitted to underwrite loans outside of Florida.

A version of this story appeared in the Jan 6-19, 2023 print issue under the headline: Inflation Reduction Act clause makes it easier for churches to go green.