With profound joy and hope, five years ago we got word of the release of Pope Francis' "Laudato Si', on Care for Our Common Home," the encyclical focused on the environment. At last, a respected spiritual leader whose voice was heard around the world understood what we, the indigenous peoples, had been trying to explain without being understood.

Laudato Si' was bringing to light the importance of caring for nature, the respect for the Earth and its ecosystems; it was validating our millenary cultures and our ancestral knowledge. For us, this meant that, at last, someone with great influence was grasping the eternal truths that we all share a common space and should question the consumer lifestyle that destroys and violates human rights, the rights of nature and those of our people.

It was vital for so many of our people to deeply understand that destroying nature and life, from which we are inseparable, meant destroying our common home. For many, this might have been something new, but for those of us who have been voicing this problem from the start, this meant an endorsement of our centuries-old struggle to defend life on the planet and the sacred places as living creatures: the ecosystems all around the world.

Since its publication, the response to this encyclical has been slow, even within the structure of the Catholic Church. For the indigenous people, it has always been very clear that, as Catholics, we needed to accept before it was too late that our habitat is part of the divine creation and, as such, sacred. So, too, has it long been for the Sarayaku people, of which I'm a member, and where the Living Forest (Kawsak Sacha) is considered sacred. And as one entity, it has rights.

However, the extractive industries and the great majority of governments seem to have understood nothing and continue with a course of action that is small-minded, polluting and predatory of nature, generating social inequity and supporting a culture of waste. The forums and global agreements are going back, losing some of their previous achievements.

We all know that those who invest in oil production, mining, lumber, hydroelectric plants, coal and agribusinesses, among others, have always put their own financial interests first, way above such fundamental human rights as life, water, air, earth or a healthy environment where our children can grow and our elders can age without getting sick or dying. 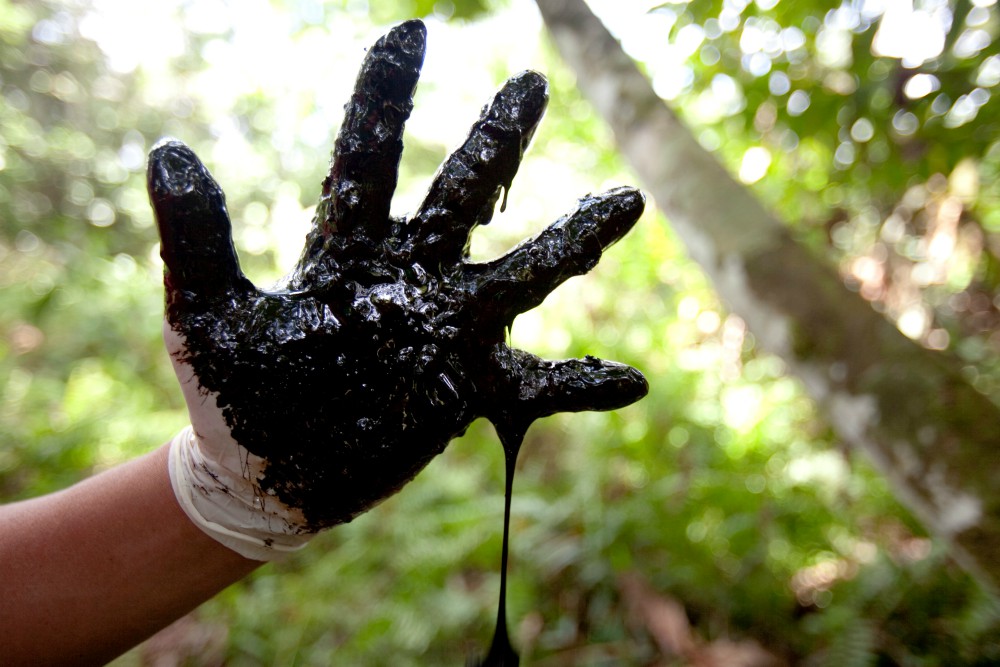 But not even pandemics such as the present one will make them reflect. Money is valued more than life, as they press on the extractive frontier backed up by governments and armies and irreparably destroying biodiversity. But most of all those actions accelerate a very visible ecological and climate imbalance that already has grave consequences in many places, as we can all see and have to endure. Social degradation and extreme poverty in certain areas like our land, where resource extraction takes place, promote and exacerbate this process.

We also see that cutting-edge technology has been unsuccessful. We've seen this in Ecuador, with the recent break of the oil pipelines that carry millions of barrels of oil, causing spills in important rivers like the Napo, and other tributaries of the Amazon River. This type of water contamination has had huge consequences and is currently affecting in a serious way the fish population and the health of men, women, children and elderly in hundreds of communities living by the shores of the affected rivers. We should add the big floods we just experienced like never before, which have wiped out entire communities. The impact is so obvious in every respect; we can't understand how they continue to be ignored.

In spite of so much, the impact of Laudato Si' in many parts of the world is very important for our people, but also for life and the human being as a whole. Francis has encouraged and supported the ecclesiastical institutions to get involved, at last and wholeheartedly, to take care of our common home, to support the steps to preserve nature and territory. A number of meetings and reflections on the topic have originated in that regard. 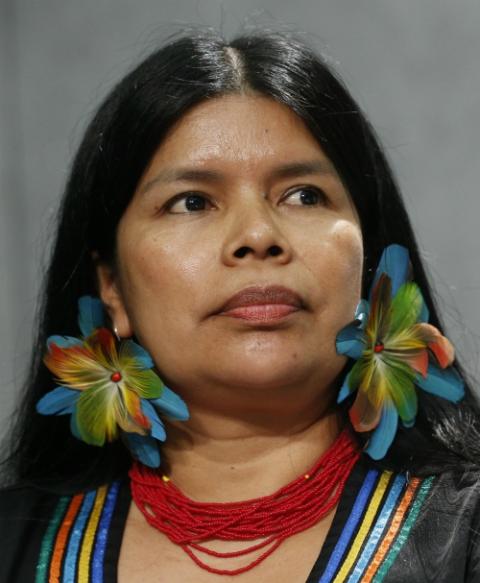 Author Patricia Gualinga attends a news conference to discuss the Synod of Bishops for the Amazon at the Vatican Oct. 17, 2019. (CNS/Paul Haring)

It could be affirmed that, as of today, one of the direct outcomes of this encyclical has been the synod for the Amazon, which took place in Rome in October of last year. This represented the opportunity for our peoples to be finally heard. It was a chance to work directly on the current Amazonia situation and its frailty, to take action but, above all, to be mindful of the role that the church should play in this diverse territory, working with the different peoples and cultures.

We should be a church that reacts with a strong presence, and not as feeble or for appearance's sake anymore. It is then that it becomes an ally, a friend, an ecclesial institution that walks side by side with those who strive to preserve nature. This was something new for all, and a big step forward on the part of the church.

If this support continues, the indigenous peoples will have the wonderful and unique opportunity to rely on an unrivaled ally in our fight to defend life. The final document and the decisions taken by Rome have marked our plan to work arduously to execute this initiative in our territory, which is a task of serious responsibility but necessary in a pressing situation that threatens us all.

In spite of being a complex situation, it may seem that our global citizens are starting to react, albeit weakly and slowly. The encyclical has also been an example in several areas and places, acting as an instrument that could be used as an argument — a valid tool for all to defend nature, to question the relationship between man and creation, to reflect about the core elements of life, which includes us all. For the first time, we seem to agree on the respect due to the sacredness of creation; that includes scientists, indigenous wise ones, and our ecclesiastical institution in the voice of Pope Francis.

With that in mind, our youth is our greatest hope. During these five years, many young people have risen from all corners of the world, questioning governments and businesses, and whose conscience, charism and understanding are worthy of admiration. They are well-informed and present convincing arguments about the future. They are the new generation to whom we will pass the baton, the generation that has taken notice of the planet they will inherit and recognizes that all efforts in this direction are worthy as they relate to our survival. They might not all know about Laudato Si', but they all agree that they need to fight for this future, for them and for all.

We have witnessed results of the encyclical in the arduous work done by the Pan Amazon Ecclesial Network (REPAM), which has battled for our causes, and reported inequality, human rights violations, and violations against the rights of nature and the inhabitants of Amazonia. Another step forward has been the Amazonia synod, an initiative with a long road ahead to work with great responsibility in the implementation of the guidelines established by the synod for these vulnerable territories.

In this complex situation that we live in, Laudato Si' arrived after centuries of waiting to support and strengthen our people's battles on behalf of our forests, of which we are part, as if we were one.

[Patricia Gualinga is a defender of indigenous rights and a leader of the Kichwa indigenous community of Sarayaku, Ecuador. This commentary was translated from Spanish by M. Alejandra Hall.]