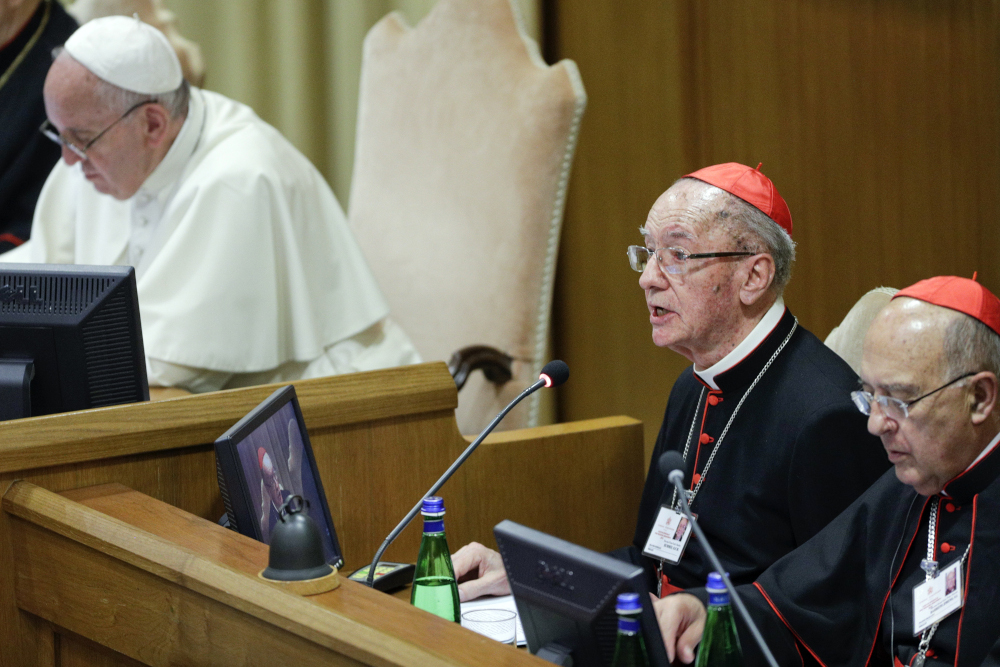 Cardinal Claudio Hummes, second right, speaks during the Amazon synod at the Vatican, on Oct. 7, 2019. Pope Francis has told South American bishops to speak "courageously" at a meeting on the Amazon, where the shortage of priests is so acute the Vatican is considering ordaining married men and giving women official church ministries. (AP/Andrew Medichini)

The first working session of the Synod of Bishops on the Amazon began on Oct. 7, with a call from a leading Latin American cardinal for new pathways in service to indigenous peoples and protection of the rainforest.

Brazilian Cardinal Claudio Hummes gave the talk as "relator," or the person appointed by Pope Francis to guide the bishops in the synod. Hummes spoke after the pope warned the bishops against being captives of ideologies, which attempt to impose solutions while ignoring the concrete situation.

In the past, the pope noted, ideology divided peoples into those who are civilized and those who are barbarians. Such an approach led to contempt for indigenous peoples and attempts to annihilate them. Instead, Francis said the synod should listen to the indigenous and work together under the guidance of the Holy Spirit.

Prior to meeting in the synodal hall, the pope and bishops participated in a prayer service in St. Peter's Basilica that included indigenous people some dressed in native garb, some barefoot. Afterwards, they walked through St. Peter's Square to the the hall carrying items from the Amazon, including a canoe, oars and a net. When the pope saw the net, he quipped, "I hope it can catch piranhas."

In his 50-minute address, the 85-year-old Hummes, a former prefect of the Congregation for the Clergy, spoke of the need for the Church to move forward.

"The Church cannot remain inactive within her own closed circle, focused on herself, surrounded by protective walls and even less can she look nostalgically to the past," he said. "The Church needs to throw open her doors, knock down the walls surrounding her and build bridges, going out into the world and setting out on the path of history."

To those who think this is a rejection of tradition, Hummes responded, true tradition "is the Church’s living history," which accepts what has been handed down but "enriches this tradition in current times with their own experience and understanding of faith in Jesus Christ."

Quoting Francis’ 2013 apostolic exhortation, Evangelii Gaudium, Hummes affirmed: "Whenever God reveals himself, he brings newness." So, "we must not fear newness, we must not fear Christ, the new. This synod is in search of new pathways," he said. Citing John Paul II, he spoke of the necessity of inculturating the Christian faith in different situations.

While acknowledging the work of Catholic missionaries of the past and present in the Amazon, he noted "an almost total absence of the Eucharist and other sacraments essential for daily Christian life." The cardinal reported that, during the consultation period, indigenous communities "requested a path be opened for the ordination of married men resident in their communities."

They also requested that service of women leaders in their communities "be acknowledged and there be an attempt to consolidate it with a suitable ministry for them."

The indigenous people also want "the church's support in defending and upholding their rights as well as in the creation of their future," reported Hummes, who believes that "humankind has a great debt toward indigenous peoples." Their right to be leading players in their own history should be returned to them, and they should not be the victims of anyone's colonialism.

"Their cultures, languages, history, identity and spirituality are humanity's wealth and must be respected and preserved as well as included in global culture," he asserted.

Quoting from the working paper distributed prior to the synod, Hummes complained that life in Amazonia has perhaps never before been so threatened "by environmental destruction and exploitation and by the systematic violation of the basic human rights of the Amazon population. In particular, the violation of the rights of indigenous peoples, such as the right to territory, to self-determination, to the demarcation of territories, and to prior consultation and consent."

The threats to the region include political violence, water rights, logging and mining projects as well as concessions to hydroelectric dam construction. The poverty that results from the denigration of the Amazon, he reported, promotes the drug trade, sex work and human trafficking and puts pressure on a society already coping with the loss of its cultural identity.

These threats, according to Hummes, come from "the financial and political interests of dominant sectors in today's society, in particular those of companies that extract riches below the ground in a predatory and irresponsible manner (legally or illegally) also altering biodiversity."

In his report, Hummes focused especially on water. Clean water is a critical issue in the Amazon as well as around the world. It is essential to the survival of Amazonian residents as well as the rainforest.

Hummes concluded by listing six core issues on which he thinks the synod should focus:

As the synod continues, bishops and other participants will have their chance to speak, and we will see if they are on board with the direction Hummes would like to see the synod travel.