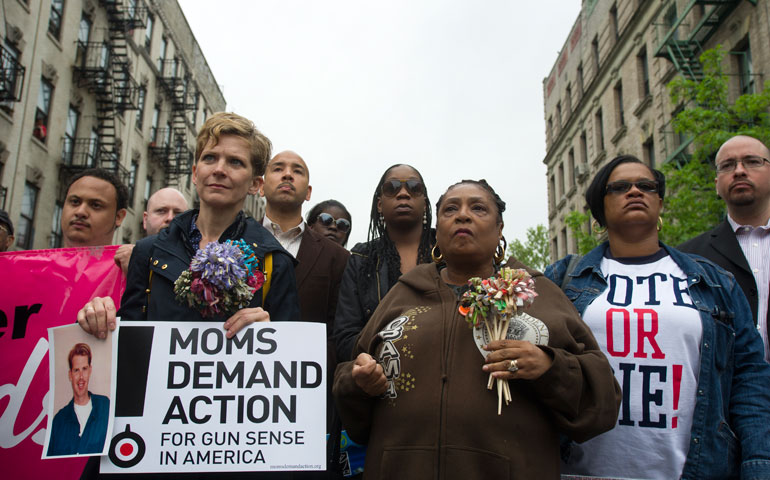 During Mother's Day weekend, hundreds march through the streets of the South Bronx in New York for the Moms Demand Action for Gun Sense march and rally May 11. (Newscom/Frances M. Roberts)

A year after the shooting of schoolchildren in Newtown, Conn., federal action to control gun violence has stalled, but advances have been made at the state level, according to activists and academics who monitor gun legislation.

The tragedies and the successes of the last year have created a new climate for gun legislation that is giving the gun control movement momentum, they say.

"Without a doubt there has been progress at the state level, probably no better example than Maryland, which really adopted a comprehensive set of policies," said Daniel Webster, director of Johns Hopkins Center for Gun Policy and Research. "The federal landscape is far more challenging than the state level. You name your issue, it is hard to get anything moved forward in this Congress. Guns are always hard."

Webster also added Colorado, California, New Jersey, New York and Delaware to the list of places where legislation has been successful.

On Dec. 14, 2012, 20-year-old Adam Lanza entered Sandy Hook Elementary School in Newtown armed with a semi-automatic rifle and two handguns and fatally shot 20 children and six adult staff members before killing himself as first responders arrived at the school.

The shooting brought renewed attention to gun violence and motivated people to join grassroots movements across the country organizing around gun issues, some of which existed prior to Sandy Hook and some that emerged after.

A month after Sandy Hook, President Barack Obama announced that he would work with Congress to change the face of gun control in the United States. He called for universal background checks for gun sales, strengthening an assault weapons ban, and limiting ammunition magazines to a 10-round capacity. He also offered measures for addressing school safety and mental health.

In April, however, Congress defeated the Manchin-Toomey Amendment, which would have expanded background checks on firearms sales and banned some semi-automatic weapons.

"As with any issue people find themselves more motivated after crisis," said Lance Orchid, a national organizer director for gun violence prevention. "Unfortunately these types of crises involve the loss of American lives and innocent citizens and it's a lot to emotionally handle, particularly when you aren't focused on it on a daily basis."

The best estimate of the number of Americans killed by guns since the Sandy Hook shooting is 31,174 as of Nov. 22, according to the online magazine Slate, which used data from the Centers for Disease Control and Prevention. Slate estimates that about 60 percent of the CDC figure is suicides.

Orchid, who has worked for many years to support movements organized to work on gun issues, sees renewed hope for how grassroots efforts can affect gun laws. "Every week there seems to be something where people are galvanized and doing things that would not have been possible for us a year ago as a movement," he said.

One success he points to is Moms Demand Action for Gun Sense in America, a movement begun by the mother of five children on Dec. 15, 2012. Shannon Watts of Indianapolis started a Facebook page bringing together mothers as a response to the Newtown shooting.

"Shannon Watts is the perfect kind of accidental activist," Orchid said. "As many of us were, she was profoundly affected by Sandy Hook. She has built a grassroots movement that is not going away."

Watts' movement has grown into chapters in 75 cities that stand for "the right to protect our children." The group's priorities are to ban assault weapons and ammunition magazines of more than 10 rounds, require background checks for all gun purchasers, report sales of large quantities of ammunition, and limit the scope of concealed weapons laws at the state level.

"For the first time, moms have a voice in this issue," Watts told NCR. "What takes some people decades to create, moms have created in less than a year. That's a huge grassroots movement focused solely on moms' voices at the federal, state and American company level."

Skip Starbucks Saturdays was a signature campaign and an organized boycott of Starbucks across the country Aug. 24. The intent was to pressure the coffee chain to amend its policy allowing customers to carry loaded guns into Starbucks stores where permitted by state law.

Though Watts' goal may not have been to start a nationwide grassroots movement, she says she has been energized by the groups working together to make guns safer and plans to continue working on the issue.

"We all talk each week about what everybody is working on. This is really a new thing that happened post-Sandy Hook that all of the gun reform groups are working together and collaborating," she said. "We all have a different voice, we all serve a different purpose and a different role, but we want to make sure we are all working together in a coordinated way."

"Maryland faith leaders played a key role in enacting this year one of the best gun violence prevention laws in the nation," said DeMarco. "This new law will save lives by requiring prospective handgun purchasers to first get a fingerprint-based license from the state police. We hope the rest of the nation will follow Maryland's lead."

Among a diverse list of groups, members of Faiths United include the Conference of Major Superiors of Men, Catholic Health Association, the Leadership Conference of Women Religious, Catholics in Alliance for the Common Good, and Pax Christi USA.

"The faith community is not going to rest on this issue until we have really enacted significant changes," DeMarco told NCR.

In January, the coalition sent a letter to Congress signed by faith leaders, including the U.S. Conference of Catholic Bishops, demanding the enactment of gun violence prevention legislation, including universal background checks, assault weapons bans and making gun trafficking a federal crime.

Though the Manchin-Toomey Amendment was defeated, Faiths United still sees it as the best way forward on the federal level.

"Right now, we are focused on what we think is doable, which is the Manchin and Toomey background check compromise," DeMarco said. "This is a very significant move expanding background checks to gun shows and pawn shops."

Laura Cutilletta, senior staff attorney for the Law Center to Prevent Gun Violence, says that this year more than other years the climate for gun legislation is different. Her organization, located in San Francisco, sponsors a website that tracks legislation dealing with gun issues in each state.

"We are feeling extremely hopeful because it was such a successful year at the state level. There were more bills that would strengthen gun laws," Cutilletta told NCR. "Not just a large number, but very significant bills."

Like other grassroots coordinators, Cutilletta acknowledges the challenges to passing federal legislation.

"There is an incredibly well-funded opposition movement that gets its primary source of funding from gun manufacturers," she said. "They have been very well-organized and can afford to make an impact."

Webster at Johns Hopkins said, "To get something done federally you are going to have to go to the places where gun control people haven't been active and recruit these majority of gun owners who support background checks to get involved, rather than let the [National Rifle Association] talk for them. I think that is going to take time."

He pointed to a January 2012 survey conducted by the Johns Hopkins Bloomberg School of Public Health showing more than three-quarters of gun owners support expanded background checks, a large majority of those being NRA members.

"All the measures that are designed to keep guns out of the wrong hands is really not a controversial topic," Webster said, "except for the pretty extreme end of the spectrum that the NRA tends to represent."

Webster said he is also hopeful to see lawmakers talking about guns again in a serious way.

A year ago, how many Democrats were talking about gun control, and now it is clearly the norm and expectation?" Webster said. "Part of the progressive agenda is to make common sense reforms to our gun laws. You at least have a fighting chance when one of the major political parties sees it as a priority. A year ago, neither party did."

[Colleen Dunne is an NCR Bertelsen intern. Her email address is cdunne@ncronline.org.]

A version of this story appeared in the Dec 6-19, 2013 print issue under the headline: Gun control activists see post-Newtown progress.