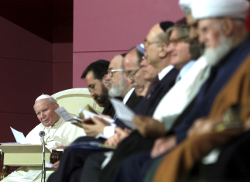 Pope John Paul II addresses religious leaders from around the world at the start of a peace pilgrimage in St. Francis' home of Assisi, Italy, Jan. 24, 2002. The pope said religious leaders would do their part to fend off "the dark clouds" of terrorism, hatred and armed conflict. (CNS photo from Reuters)

In the shadow of 9/11, John Paul said, the world needed to hear from Muslims and Christians that “religion must never be a reason for conflict, hatred and violence.”

Catholic-Muslim dialogue took on a new intensity and sense of urgency. And then came the fifth anniversary of the 9/11 attacks, in 2006.

Speaking in his native Germany on Sept. 12, 2006, John Paul’s successor, Pope Benedict XVI, was delivering a scholarly address on the Western tradition of faith and reason. He quoted a medieval Byzantine emperor who described the teachings of Islam’s Prophet Muhammad as “evil and inhumane” and “spread by the sword.”

One could almost hear Catholic-Muslim dialogue come to a screeching halt.

The statement sparked Muslim protests worldwide, some of them violent, including the burning of churches and the murder of a nun. Turkey’s top Muslim cleric said the speech revealed “the hatred in (Benedict’s) heart.”

The speech, and the reaction to it, revealed deep tensions between the world’s two largest religions, and complicated the delicate task of building understanding on both sides.

Benedict later acknowledged Muslims’ “understandable indignation” at the quotation, but insisted that he had not meant to endorse the offending words, nor to show disrespect to the Quran, which he described as the “holy book of a great religion.”

After an exchange of high-profile letters, Benedict convened an unprecedented three-day Vatican summit in Nov. 2008, but participants say the problem of religiously inspired violence continues to haunt the dialogue process.

What’s more, they say, geopolitics has only made things more difficult.

Mohammad Sammak, secretary of the Christian-Muslim Committee for Dialogue in Beirut, Lebanon, said the 2003 U.S.-led invasion of Iraq was seen by many Muslims as another crusade by the Christian West against Islam. That perception was reinforced, Sammak said, by the arrival of Christian “evangelical missionaries” on the heels of invading troops.

No world leader was more outspoken or tireless in his opposition to the Iraq war than John Paul, but the pope’s position went underreported in the Arab media, Sammak said, leaving the Vatican guilty by association in the minds of many Muslims—including an extremist minority inclined to violence.

“Muslim fundamentalists do not recognize the difference between different traditions of Christianity,” Sammak said. “To them, all Christians are the same.”

As a result, Iraq’s ancient Christian minority of an estimated 1.2 million (the majority of them Chaldean Catholics in communion with Rome) became a target for Islamist militants. According to the CIA, as many as half of Iraq’s Christians have fled the country since 2003.

Iraq’s dwindling Christians underscored the plight of Christian minorities across the Muslim world, who often suffer from terrorism, official discrimination, or both.

More recent attacks on Christians in Muslim-majority Pakistan, Egypt and Malaysia have made the issue an even greater priority for the Vatican, said John L. Esposito, a professor of Islamic studies at Georgetown University and author of “The Future of Islam.”

Yet in many ways, the Vatican finds its twin efforts to improve relations with Islam and advocate for beleaguered Christian minorities are hampered by the effects of Benedict’s 2006 remarks.

The Rev. Vittorio Ianari, head of Muslim relations at Rome’s Community of Sant’Egidio, said the Regensburg speech spawned an atmosphere of mistrust and resentment that persists in some of the most influential Islamic circles.

Ianari said that those sensitivities help explain the hostile Muslim reaction last January after Benedict denounced the “vile and murderous” New Year’s Day killing of 21 people by a car bomb outside a Christian Coptic church in Alexandria, Egypt. In response, Cairo’s renowned Al-Azhar University suspended talks with the Vatican.

Even this year’s pro-democracy “Arab Spring” has proven to be complicated for both sides.

Since Mubarak’s fall in February, attacks on Christian churches in Egypt have only increased, leading many Christians in the Muslim Middle East to rue the pro-democracy movements. Syrian President Bashar Assad, for instance, has enjoyed public support from leaders of his country’s Greek Melkite Catholic Church during his brutal suppression of pro-democracy protests.

Ianari, however, said Christians should cheer the current political transformation of Arab countries, since it could allow the church to “turn the page” in its dialogue with Islam.

“Liberty and democracy offer Muslims a great opportunity to rethink their faith in a renewed world,” Ianari said. “We should watch with sympathy, because this is an opportunity to build an element fundamental to dialogue: reciprocal trust.”