After abuse scandals, seminarians pledge to 'get it right' 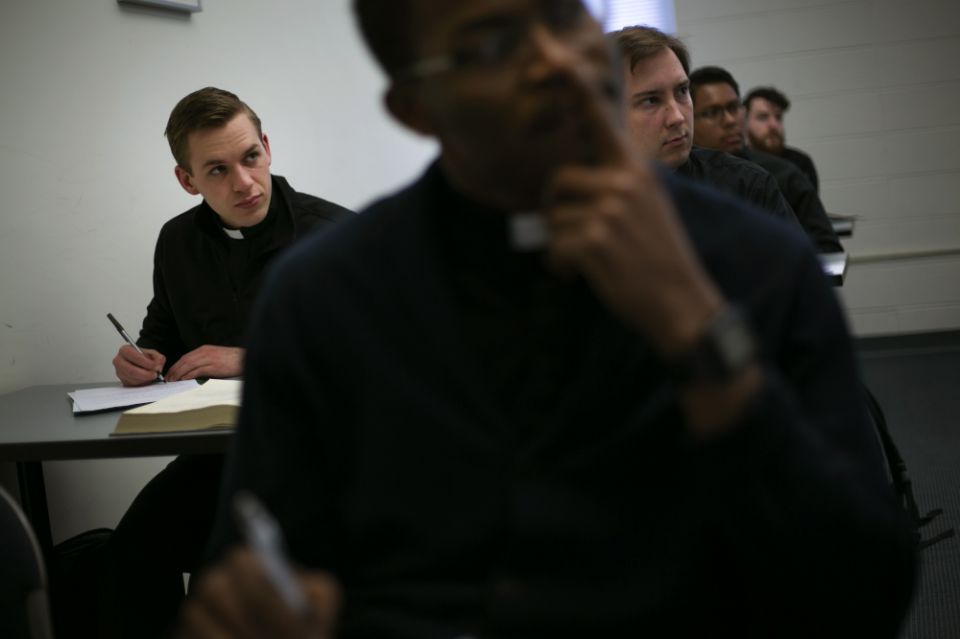 Seminarian Daniel Rice, left, sits with classmates during a lesson on the Gospel of Luke at St. Charles Borromeo Seminary Feb. 5 in Wynnewood, Pennsylvania. (AP/Wong Maye-E)

Wynnewood, Pa. — The seminarians walk along a hallway lined with photos of classes of priests who came before them. Some are pious alumni who have become their teachers and mentors; others climbed the Catholic hierarchy to be revered as bishops and cardinals.

But there are others: Raymond Leneweaver, Class of 1962, subject of at least 14 victims' reports of abuse, who even made matching T-shirts for those he raped and molested. And Edward Avery, Class of 1970, who pleaded guilty to molesting a 10-year-old altar boy in a church sacristy. And Francis Trauger, Class of 1972, who admitted to molesting a boy in a seminary shower, according to grand jurors.

The 156 young men who call St. Charles Borromeo Seminary home are deeply aware of both the sacred and the profane. They appear unflinchingly optimistic, reverent and committed, yet they prepare to enter ministry at a time when scandals have driven the faithful from pews, shaken the church's highest tiers and cast doubt on the motivations of those who say they're answering a call to serve.

"If anything, it probably made the desire to respond to God's call even more urgent," says Tucker Brown, a 27-year-old seminarian for the Archdiocese of Philadelphia who finished medical school but felt drawn to the priesthood when it came time to apply to residencies. "It was really a desire to be what a priest is supposed to be, to be a spiritual father and really a source of healing."

Classmates repeat similar sentiments around the bucolic campus of St. Charles, where buildings are dotted with paintings of Bible scenes and reminders of papal visits and chapels vibrate with blasts of the organ. Though the sins of the church may be more muted at this 188-year-old seminary, those preparing to lead Catholicism through its next chapter know they'll be charged with inspiring those wary of putting trust in the clergy again.

"In a strange and demanding and convicting way, it's almost like a challenge to be the priest that other priests weren't for the people," says Daniel Rice, a 24-year-old seminarian for the Diocese of Arlington, Virginia, who is expected to be ordained in 2022. "I want to step up and be the priest that the people actually need."

The landmark 2018 Pennsylvania grand jury report and a cascade of subsequent revelations around the globe brought back with ferocity a sexual abuse crisis that never fully went away. News of Cardinal Theodore McCarrick's abuse of seminarians drove it even closer to home for future priests. Together with growing secularism and the public's loss of confidence in the church and the men who lead it, seminaries braced for fewer applicants and felt obliged to caution those who still showed up.

"You're running into a burning building: That's what you're signing up for," the Rev. Thomas Berg, a theology professor at St. Joseph's Seminary in Yonkers, New York, says he has told seminarians.

But while enrollment at St. Charles and other Catholic seminaries is down from a half-century ago, it's been remarkably steady in recent years.

Some 4,853 men were enrolled in college-level programs at Catholic seminaries in the U.S. last school year, according to the Center for Applied Research in the Apostolate, or CARA. That was a slight increase over the prior two years and not markedly different from a decade earlier. 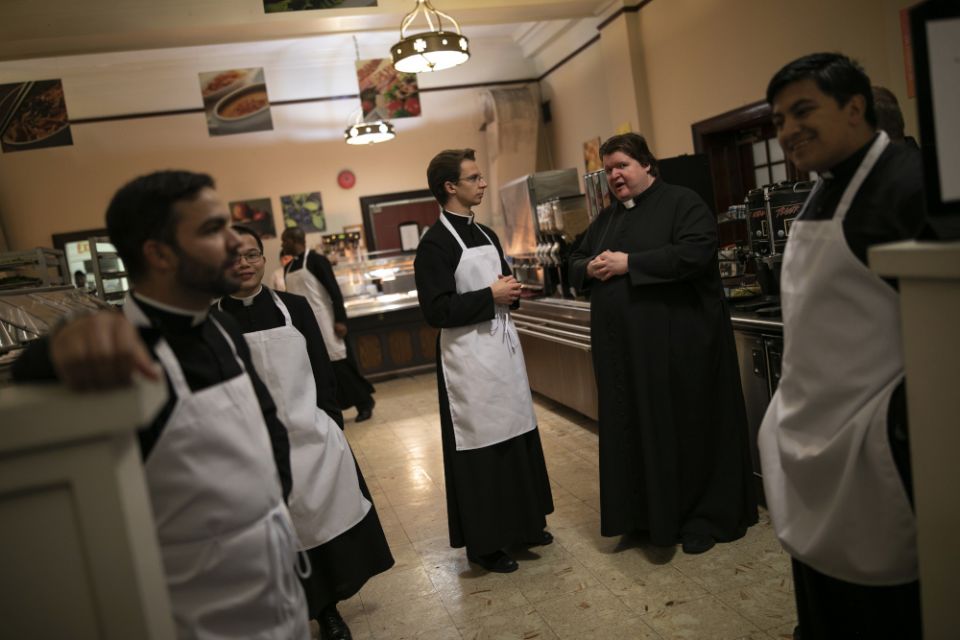 Seminarians prepare to serve dinner at St. Charles Borromeo Seminary Feb. 5 in Wynnewood, Pennsylvania. It is among the seminaries reporting a slight increase in students in recent years despite crises that have rocked the Catholic Church. (AP/Wong Maye-E)

St. Charles' current student body includes men from five religious orders and more than a dozen dioceses around the U.S. and as far-flung as Sri Lanka. Though the increases have been small, St. Charles has seen its enrollment grow for five straight years.

"People think there would be an impact," says the Rev. Thomas Gaunt, who leads CARA. "There is not, which is surprising."

Or, as Bishop Timothy Senior, the rector of St. Charles, puts it: "In spite of everything that's happened in the last few years, they're here."

Like many who came before them, the men of St. Charles speak with conviction of their calling. Eyes widen as they foresee being beside congregants in defining moments, of baptizing babies and burying the dead. They speak of their classmates as "brothers" but acknowledge they must look beyond the fraternity to ensure the future of the church and its people.

"You don't just assume that everyone is a holy man," says Deacon Alec Sasse, 26, a seminarian from Lincoln, Nebraska, who took it upon himself to read the 887-page Pennsylvania grand jury report and who is due to be ordained a priest in May. "We have our eyes open for that stuff."

Bishops in the U.S. have mandated that seminary applicants pass criminal background checks and complete psychological and medical assessments. Vatican guidelines call for screening to weed out gay applicants. 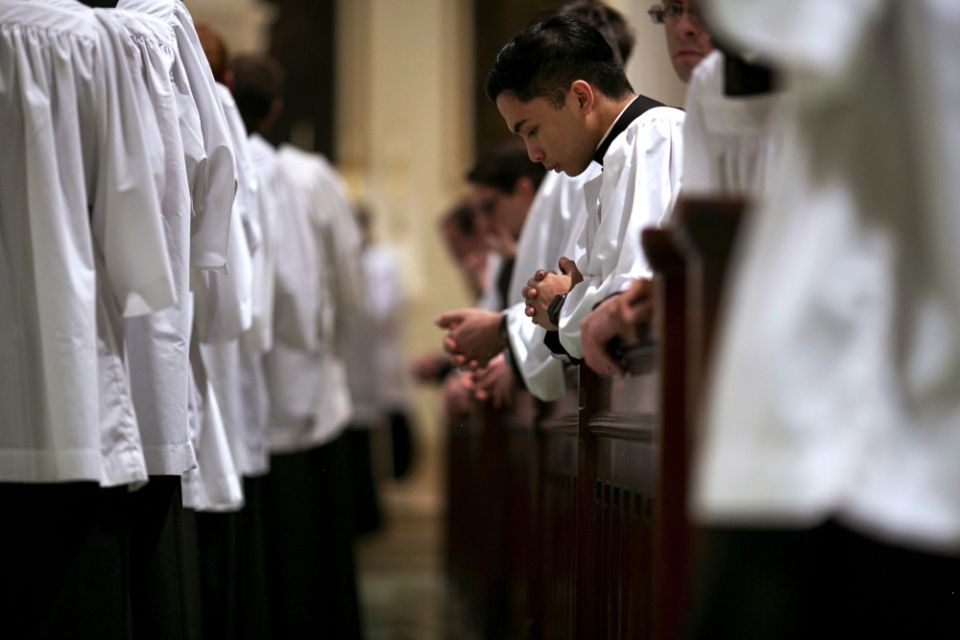 Critics express doubt that any one psychological test could effectively identify predators and say the church is wrongly linking homosexuality and pedophilia.

Senior says testing is combined with other screening tools, including increased oversight at the seminary, regular reviews and a greater understanding of warning signs that could point to future problems.

"A lot of people slipped through that never should have. And bad things happened that should never have happened," Senior says. "Could we, with greater scrutiny, have identified that sooner? I can't judge. I wasn't there. But it's certainly incumbent upon us to try to get it right now."

Mostly, seminarians are focused on the tasks at hand: Immersing themselves in prayer and study, making it to ordination and living up to the vows they make. They speak with hope of the church moving past its crises, focusing largely on the examples they will set versus institutional changes.

"I think the emphasis for me is to make every moment count," says Jordan Evans, a 24-year-old seminarian from the Diocese of Arlington. "Change happens when you give yourself to the people that are in front of you … If you want to change the culture, it's the holiness of each moment, of each interaction, of each friendship."

The current batch of men at St. Charles is among the last who will call this site home. The seminary has been running a $5 million annual deficit on its sprawling, aging complex and sold its 72-acre property to the company that runs a nearby hospital in a $43.5 million deal. Rare books from the seminary's library and valuable portraits by the influential artist Thomas Eakins have been sold off.

St. Charles has until 2024 to find a new location. For now, though, life continues. 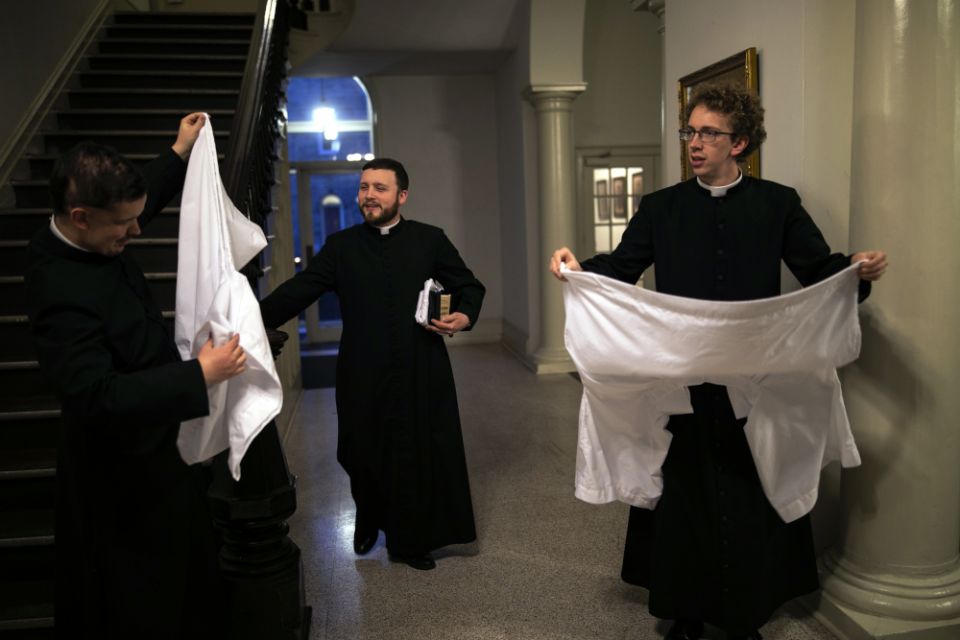 Seminarians gather after the conclusion of an afternoon Mass at St. Charles Borromeo Seminary Feb. 5 in Wynnewood, Pennsylvania. (AP/Wong Maye-E)

Men in black rise for predawn prayers and shuffle off to classrooms where Bibles are scattered on the tables and politeness reigns. They belt out thunderous refrains of "Happy Birthday" over dinner and find humor in intramural basketball teams they've named Late for Morning Prayer, and St. Charles Moving Co. They pass through a tunnel that returns them to their tiny dorm rooms, where they may wrestle in silence with their calling or be stirred with anticipation over the thought of being called "Father."

They think, too, of the wounds left to heal, ones they know could last a generation or more, and which they stand to inherit.

"Those men that wear the same thing that I do did the exact opposite of what I want to do," says Sasse. "I really consider myself to be part of a next generation of men that are hopefully really going to usher in a new level of healing."

Accountability | After abuse scandals, seminarians pledge to 'get it right'

Your thoughts on revelations of abuse by Jean Vanier

See nothing, judge everyone, act ridiculously