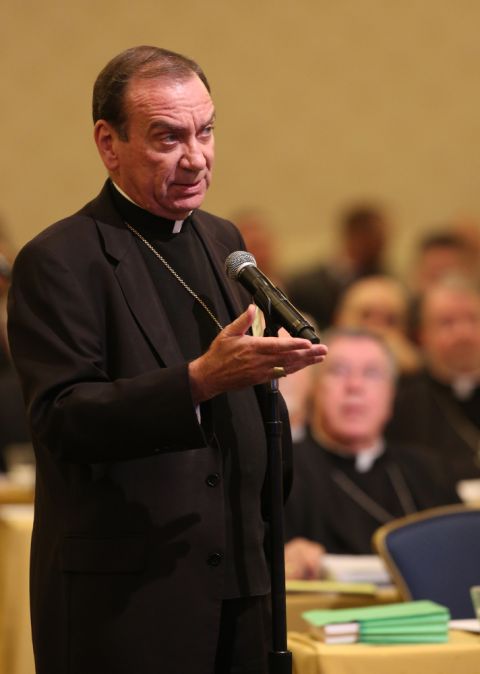 Archbishop Dennis Schnurr of Cincinnati speaks Nov. 13 during the fall general assembly of the U.S. Conference of Catholic Bishops in Baltimore. (CNS/Bob Roller)

It also reflects, he said, the downward trend in the conference's Office of Migration and Refugee Service's budget due to federal policy changes. Neither the cuts in refugee resettlement funds nor the abuse-related expenses can be fully assessed "with any certainty" at this time, Schnurr said.

The 2018 budget estimates abuse-related costs at $500,000, he added, "and as much as $1 million for 2019." The figures do not include $250,000 for what Schnurr called a "communications surge project." A proposal to create and fund a commission to investigate abuse allegations against bishops — the vote for which was not held after the Vatican asked bishops' conference leadership to hold off on it — was estimated to cost about $500,000, figuring a start date of July 1, 2019.

Moreover, the change for next spring's conference meeting from a retreat to a business meeting "which are more expensive" meetings "to mount," Schnurr said — also will figure into the 2019 numbers, including a cancellation charge from the hotel which had been reserving rooms for the bishops.

Migration and Refugee Services' budget has shrunk from $97 million last year to $78 million this year and to $66 million next year, "an overall decrease of about $31 million," Schnurr said.

The Trump administration has slashed the number of refugees it admits into the United States since it took office in 2017.

"MRS administration is decreasing $12.1 million due primarily to the reduction in the number of refugee arrivals and that directly impacts pass-through funding to the dioceses for local administration and direct assistance to clients," Schnurr said in a budget overview prepared for the bishops. Federal awards and contracts are the chief source of MRS funds.

"Refugee arrivals processed by MRS dropped from about 21,000 in 2016 to roughly 14,500 in 2017 to possibly only 8,000 in 2018. A slight increase in refugee arrivals of 10,000 is estimated for 2019 as increased security procedures get implemented by the federal government," he added. "Diocesan sites (for resettlement) dropped from 96 in 2017 to 76 in 2018. Some sites decided to drop out of the programs or were closed by the government funding agency because the added capacity for resettlement offices was no longer needed."

Migration and Refugee Services' resettlement services department revenue is likewise decreasing by $1.4 million "due largely to both a reduction in the number of refugee arrivals and changes in number of clients eligible to be serviced by the program," Schnurr said. "The Cuban-Haitian program experienced a 76 percent cut due to the cancellation of automatic parole for Cubans who arrive in the U.S.A. without a visa, and a slowdown of processing individuals through the parolee orientation program ... due to the sonic attacks at the U.S. embassy in Havana."

The 2019 bishops' conference budget reflects a 3 percent increase in the size of the diocesan assessment, or tax, each diocese pays to fund conference activities.

In communications, Schnurr noted that the overall budget for communications includes "Catholic Communications Campaign Committee-approved grants of $2.8 million." He added, "Talks continue within the Subcommittee for CCC and the broader Communications Committee to reduce the amount of grant funding to the operations of the Communications Department including CNS (Catholic News Service)."

The 2018 conference budget lists an even $3 million in CCC grants to fund various communications operations. The proposed 2019 number is slated to shrink slightly to $2.85 million in 2019.

Within the conference's communications umbrella, CNS "continues to project no increase in revenue. This reflects the continuing trend of fewer diocesan newspapers publishing in print," Schnurr said. "The Office of Marketing and Episcopal Resources is projecting a 2 percent decrease in revenue in the amount of $59,000 due to lower revenue from publication sales."

To meet a displaced person is to encounter Christ, pope says