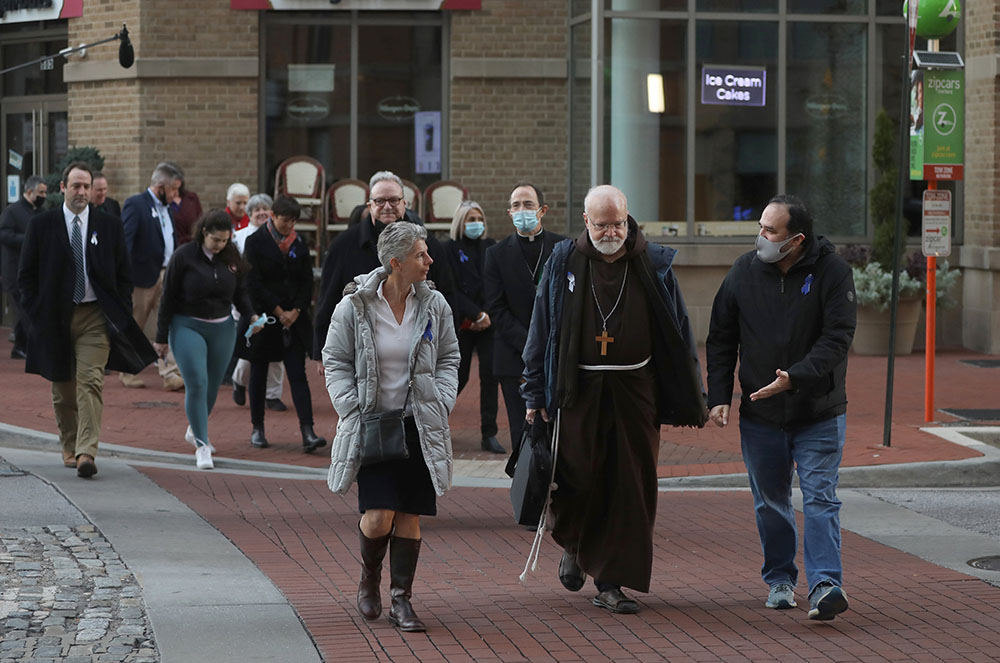 The sun barely had peaked over the horizon, ending the darkness and bringing light into Baltimore's Inner Harbor, where two U.S. cardinals, six bishops and prominent leaders of various faiths clasped hands with a group of about 20 men and women Nov. 18, praying for an end to the "evil" that brought them together.

That evil is sexual abuse of children, which some of the adults in the group had experienced as minors, including at the hands of clergy, or who had family members still coping with its lifelong impact.

Cardinal Joseph Tobin of Newark, New Jersey, in his prayer, asked God for the "courage to name the evil among us ... to eradicate it ... with your power."

Along with Boston Cardinal Sean O'Malley, Tobin took a brief "sunrise walk," as the event was billed, with survivors, ending the stroll near the harbor just outside the hotel where the U.S. Conference of Catholic Bishops met in person Nov. 15-18. 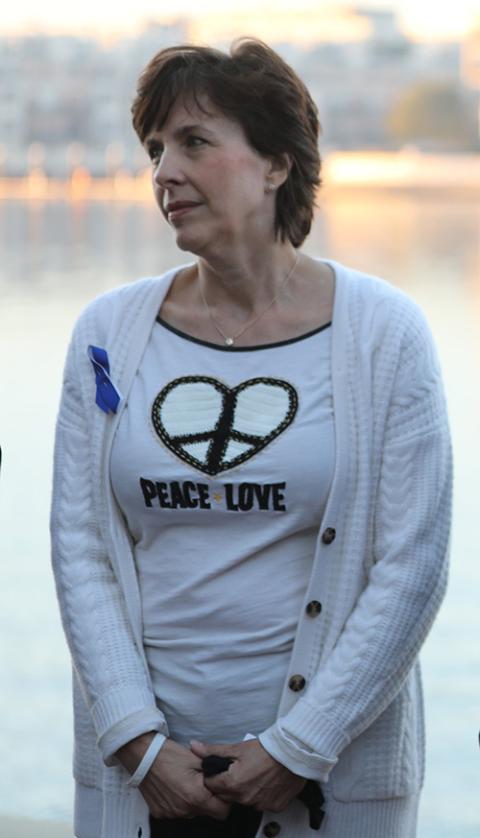 Jennifer Wortham joins others in prayer during a sunrise walk to end abuse Nov. 18 in Baltimore. (CNS photo/Bob Roller)

The walk was by invitation only, said Jennifer Wortham, one of the organizers of the event, who wrote to Pope Francis about the suffering of her family brought on by their parish priest. Francis responded and they met.

"My brothers experienced many challenges throughout their lives as a result of their childhood abuse, but I believe the most difficult challenge they experienced was the loss of their faith," she said in a news release announcing the inaugural event.

In a Nov. 18 interview with Catholic News Service, she said organizers invited leaders of other faith traditions because "it's not just a Catholic issue. It affects children in all places."

"It's not enough to survive," said Potasnik during his prayer to the group he called his friends. "We want to succeed."

O'Malley, president of the Pontifical Commission for the Protection of Minors, spoke of a world that is "very broken" and said "we're here to heal."

The cardinals joined hands with Wortham, who said she has written another letter to Francis asking that the church observe a day of prayer for victims and survivors, which Europe already observes, on Nov. 18, the day the group in the U.S. chose for the walk. The small group of survivors came from places such as Colorado, California and up and down the East Coast.

Jesuit Fr. Jerry McGlone, who joined the group as a survivor and is part of the Global Collaborative group that sponsored the event, said that in observing such a day, "we can do something in a public way that provides hope for those who will never tell their story." And that is the majority of adults who experienced abuse as children, he said.

"Why is that important?" he asked. "Because in remembering, hopefully we will never repeat what has happened. ... The body of Christ is pretty injured these days. What do we do with the injured body of Christ? We hold it, care for it. We don't forget."

Tobin told CNS he joined the walk after an invitation by Mark Joseph Williams, who is a survivor of sexual abuse by a priest and serves as a special adviser at the Newark Archdiocese.

"It renews my commitment to walk with survivors and to do my best to ensure that abuse is eradicated in the church and beyond," Tobin told CNS.

Nearby, Williams spoke with others who had joined the walk as the first rays of sunlight began to illuminate the harbor.

"We're literally walking together, journeying together," Williams said, in a nod to Francis' synod call to Catholics to engage with others, to encounter, to listen and discern. "This is extraordinary, to have them, these are the leaders of the church."

Williams said that to have the bishops and cardinals as well as the other religious leaders accompany the group at such a time, when the pope has asked for that type of encounter, "it means the world to us as survivors."

"They're saying, 'We hear you. We love you. We feel your suffering,' " Williams said. "That's the essence of the paschal mystery. That's our faith. That's Christ."