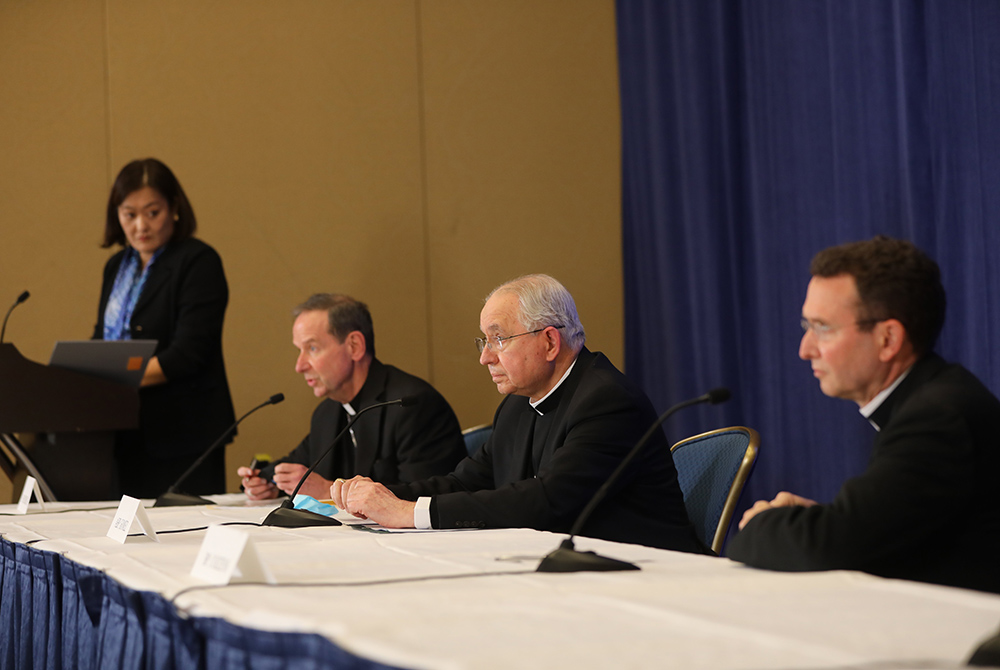 At the first press conference during the U.S. bishops' fall assembly, conference president Archbishop José Gomez of Los Angeles did his best to convince the world that the bishops' document on the Eucharist was never about criticizing President Joe Biden or focusing on other Catholic politicians who do not oppose legalized abortion.

Bishop Michael Burbidge of Arlington, Virginia, chair of the Committee on Communications, echoed Gomez. "I think it's very important to emphasize that it was never the intention to target any individuals or groups of individuals," he told the press conference. "This document is part of a strategic plan that the bishops had already approved."

Apparently Kansas City, Kansas Archbishop Joseph Naumann, chair of the Committee on Pro-Life Activities, did not get the memo. He couldn't help himself, and so he gave the lie to the party line the other bishops were trying to peddle.

He took to the microphone the next day to opine: "I'm not sure that we've taken that seriously as bishops, our responsibility for the care of the souls of these politicians. … If the Catholics in the Congress, members of the Congress, if the Catholics supported the church's teaching we'd have bipartisan supermajorities."

Thanks for that clarification, archbishop.

The mainstream press was not buying Gomez's denial about the origins of the text. My colleagues Brian Fraga and Joshua McElwee did not buy it. Peter Smith at the Associated Press saw through the smoke screen. Ruth Graham at The New York Times was not convinced. As NCR editorialized this week, the document "certainly is not a win for truth, as the president of the bishops' conference blatantly lied in a press conference about the origins of the document."

Perhaps "blatantly lied" is a tad strong. As I listened to Gomez and Burbidge dissemble, I was reminded of an observation in Joan Estruch's history of the origins of Opus Dei and its founder St. Josemaría Escrivá, Saints and Schemers: Opus Dei and Its Paradoxes. Speaking of Escrivá, Estruch observed, "He was sincere in the sense that he was the first to believe his own propaganda."

Sadly, this effort to convince the media to forget what we so vividly remember was not the most shocking part of the bishops' assembly. That came when the chair of the Committee on Catechesis and Evangelization, Bishop Andrew Cozzens, bishop-elect of Crookston, Minnesota, spoke about the various ways the bishops will promote their "eucharistic revival." I confess I am not a fan of the bishop, in part because he was a protégé of disgraced Archbishop John Nienstedt, and in part because he could not inspire a mouse to cheese.

As he rolled out the plans for the eucharistic revival, he spoke about launching their website, and that they are developing a "national advertising strategy," which is being funded by the Knights of Columbus. Cozzens assured the body that the conference would make available "professionally produced catechetical resources." He promised a National Eucharistic Conference that would feature a monstrance blessed by the Holy Father! He listed "deliverables" and suggested setting up a new 501(c) 3 organization to handle the fundraising and organizing of the conference, which they anticipate will cost $28 million. His biography doesn't mention that he picked up an MBA somewhere along the line, but he sure sounded like a management consultant.

The great Swiss theologian Hans Urs von Balthasar once wrote that the church's "most essential forces — prayer, suffering, faithful obedience, readiness (perhaps unexploited), humility — elude all statistical analysis." These forces are costly but not expensive, free but demanding. They do not require a $28 million budget or an advertising campaign. Management buzzwords are the opposite of prayer, and the effort the bishops made to obfuscate what transpired in the past year makes a mockery of the spiritual forces that truly drive the church.

One of the most common throwaway lines one hears from bishops, and which prefaces many of their subsequent claims and proposals, is that the culture has become overly secularized. At one level, this is obviously true, but there is something so impoverished about the bishops' attempts to respond to the culture. The Catholic faith can exist alongside and even flourish in any and all cultures, even those that are actively hostile, but the current leadership of the bishops' conference yearns for a return to the ghettoized church of yesteryear. They know, they must know, that this is impossible, but they do not know what else to do. They do not know how to embrace, still less to influence or evangelize, the culture of today.

At one point during the U.S. bishops' debate about their document on the Eucharist, they were discussing whether or not to add the adverb "etc." to the text. I could not help recalling the great Yul Brynner learning the word from Deborah Kerr in the 1956 movie version of "The King and I" and then saying the newly learned word as often as he could.

The leadership of the conference is like the fictional King of Siam. They are well intentioned and they want to bring themselves up to date with the times, but they are leery of the forces at work in the contemporary culture, and they are loathe to set aside the prerogatives the old culture bestowed on them. They misinterpret many things. They cling to anyone who promises a way out, and there are powerful, wealthy conservative interests only too willing to serve as guides, holding their hands and leading them into a complete reduction of religion to politics, and conservative politics only.

Outside the hotel ballroom, our nation's democracy has never been more threatened than it is today. The racial reckoning continues in fits and starts, and moral leadership is desperately needed to avoid violence and simultaneously stop avoiding a real coming to terms with the evil racism continues to inflict upon our culture. The COP26 meeting demonstrated the dire situation the planet faces if significant and comprehensive changes are not made, and quickly made, in our economy. The pandemic continues to cause suffering around the globe. None of that was permitted to intrude on the debate and discussions inside the ballroom. That is scandalous.

Still more scandalous was the fact that the bishops seem to think some ginned-up, consultant-driven, $28 million boondoggle will have the power to restore the centrality of the Eucharist in the life of the Catholic faithful. The sacrament of the Lord's passion, death and resurrection has never needed a management consultant. It only needs those who claim to follow the Lord to follow him, to empty themselves as he emptied himself, to take up their cross as he did, to cling obediently to the Father's will. It is the Holy Spirit who has the power to unleash a genuine eucharistic revival, but the Holy Spirit seemed far from the proceedings in Baltimore.

These most American of prelates want "success" but success is not a category we find in the Gospel of Jesus Christ. In America, it is the shepherds who are the most lost of all.

Still more scandalous was the fact that the bishops seem to think some ginned-up, consultant-driven, $28 million boondoggle will have the power to restore the centrality of the Eucharist in the life of the Catholic faithful.