The chill descending over the Diocese of Buffalo, New York, this fall is not just the cold winds blowing off Lake Erie. 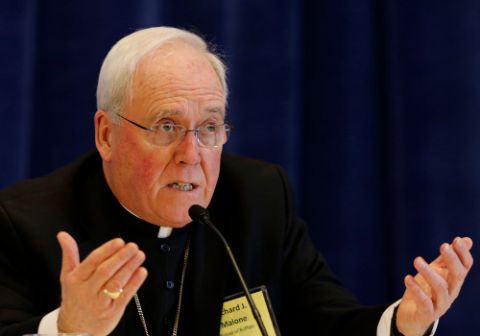 Bishop Richard Malone of Buffalo, New York, speaks during a news conference during the 2015 fall general assembly of the U.S. Conference of Catholic Bishops in Baltimore. (CNS/Bob Roller)

In this year of tumult for the church, from a damning Pennsylvania grand jury report to a cardinal called out for sexual harassment and abuse of a minor, perhaps no other region in the country is feeling the fallout more than the 721,000 Catholics of the Buffalo Diocese.

Catholics in the diocese were assuaged when their church seemed to weather previous storms, such as the 2002 Boston exposure, relatively unscathed. However, local investigative reporters discovered over the summer a series of sex abuse cases covered up by bishops. The result has been a call for the resignation of the current bishop, Richard Malone, who came to Buffalo from Boston in 2012. The publicity has also tarnished the tenures of Bishops Edward Head, Henry Mansell, and Edward Urban Kmiec, all of whom are now accused of covering up for sex abuse among diocesan clergy dating from the 1970s.

This past year, Buffalo Catholics learned that:

"We need help," Deacon Paul Snyder of St. Mary's Church in Stormville, told NCR. Snyder, a deacon for 15 years and owner of a prominent Buffalo business, has argued for Malone's resignation and a review of the diocese's response to sex abuse from wider church authorities.

In an Oct. 14 letter to papal nuncio Archbishop Christophe Pierre, Snyder wrote, that "the actions and inactions of Malone has scandalized the Diocese of Buffalo and had a severely detrimental impact on the Faithful People of Western New York."

Snyder told NCR that the diocese is suffering from "an unbearable toxicity" due to the sex abuse revelations of crimes and cover-up. He said he was most personally affected by the Yetter case, which involved the pastor of one of the diocese's wealthiest parishes, where Snyder serves. Yetter is charged with having groomed teenagers in his parish who were then harassed when they were young adults.

Malone knew of the charges, said Snyder, but failed to notify the parish, even though diocesan workers are informed of the need to disclose information about sex abusers. Malone only moved after the uproar generated by the release of the Pennsylvania grand jury report in August.

"I was blindsided, as was everyone else," said Snyder. "This is the scandal of the cover-up. You can't trust anything coming out of our chancery."

A spokesperson for the diocese said that Malone has no intention of resigning and declined to respond to the charges of cover-up made against the bishop.

New chapter opens in Pennsylvania in fight over suing church