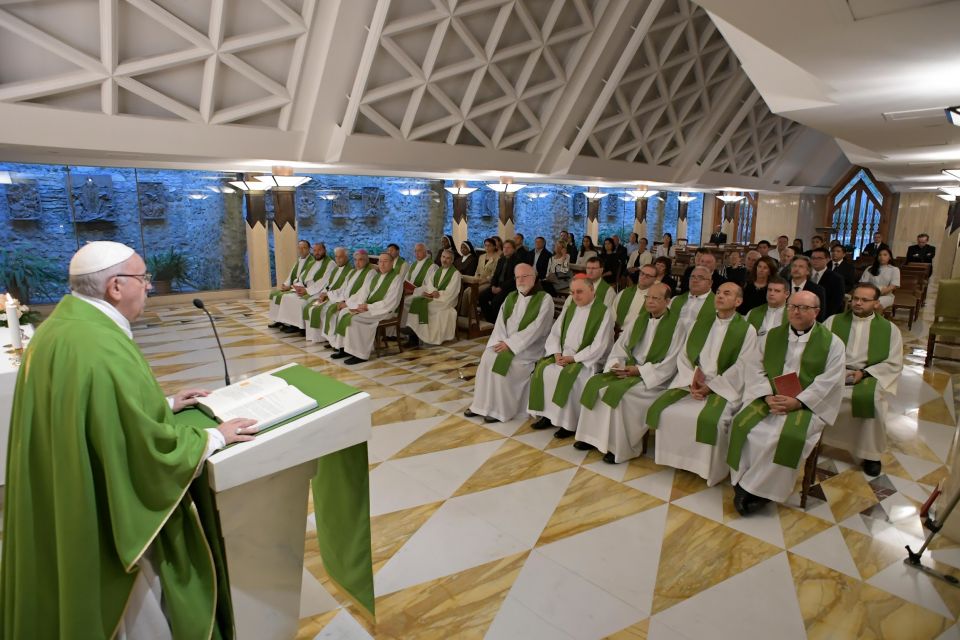 Pope Francis gives the homily as he celebrates morning Mass in the chapel of his residence, the Domus Sanctae Marthae, at the Vatican Sept. 11. The pope said the devil seeks to reveal sins in order to scandalize the people of God. (CNS photo/Vatican Media)

"Reform" is the mantra on all lips. The summer of hell for the Catholic Church, in which the clergy sex abuse crisis of 2002 came roaring back onto the front pages after the removal of former-Cardinal Theodore McCarrick first from ministry and then from the cardinalate, followed by the Pennsylvania grand jury report, has led to this call for change and reform from every wing of the Catholic Church. But not all reforms are equal and not all are advisable.

The Holy Father announced this week that he is summoning all of the heads of the world's episcopal conferences to Rome for a meeting next February. They will focus on the issue of sex abuse. "If they're putting this off, planning it for five months, it better not just be more talking," Peter Isely, a founding member of Ending Clergy Abuse, a global survivors and activists group told the Washington Post. "There's this disconnect between how grave this is and then this pace with which they move." Alas, Mr. Isely is right: Roma aeterna does not only mean the great city is eternal, but that it seems to take forever to get anything done.

Coverage of the explosive Viganò dossier focused on the allegations the former nuncio made and on the score settling that seemed to take up at least eight of the nine pages. But, what that dossier also showed is what the pope is up against. It is easy for columnists in the states to complain about the slow pace of reform, whether the issue is clergy sex abuse or the Vatican's notoriously opaque finances. But Viganò unwittingly showed the degree to which the Vatican Curia is a hotbed of rivalries and gossip, the divisions not breaking down along ideological or partisan lines only. For example, Viganò praised his mentor Cardinal Giovanni Battista Re, and did not even mention another Re protégé, Cardinal Justin Rigali. But Re was part of the regime of Pope John Paul II that set the pattern other bishops followed in dealing with clergy sex abuse: Refuse to meet with victims, discredit their testimony, cover-up for criminals and their criminal acts, tell bishops not to be too tough on their priests, hold no bishop accountable, protect the institution at all costs.

The Vatican has gotten better at dealing with sex abuse. For two pontificates running, zero tolerance has been enforced against priests who abused children. And, while Pope Benedict could not bring himself to discipline bishops for neglect, Pope Francis sacked Bishop Robert Finn of Kansas City-St. Joseph, Archbishop John Nienstedt of St. Paul-Minneapolis, and the entire episcopal bench in Chile for their mishandling of abuse. (Nienstedt also stood accused of misconduct towards adult subordinates, a charge he denies.) And, Francis, we should recall, is the one who finally took action against McCarrick.

Still, Isely and others can point to the failure to go through with plans for a tribunal to try cases against bishops charged with neglect as evidence that the reforms are incomplete and even half-hearted. Irish survivor Marie Collins has been clear as a bell in voicing her concerns about the glacial pace of change in the Curia and the continuing indifference of too many who work there.

Some people think the reform that is needed should focus only on the sexual issues involved in the scandal. The libertarian Napa Institute has announced the schedule for its "Authentic Catholic Reform Conference" in early October. Professor Janet Smith of Sacred Heart Major Seminary in Detroit will discuss "The Problem of Homosexuality." A TBD speaker will address "Humanae Vitae as a Charter for Reform." I am happy to address that if they can't find anyone else. I like Humanae Vitae, but I appreciate it as a last gasp of Neo-Scholasticism, so I am not sure how it could serve as a charter for reform. Scott Hahn will speak about the universal call to holiness, a central theme of Vatican II, but one that, in Hahn's hands, seems oddly allergic to any deep examination of the pathologies of U.S. culture. This could be EWTN's greatest hits. It is as if the organizers think the world would be well if we could all be extras in a remake of the early sitcom "Leave it to Beaver!"

Others think the reform requires a wholesale transfer of power from the hierarchy ("bad!") to the laity ("good!"), which would make us Congregationalists. Indeed, I am suspicious of the use of the word "power" in discussions of reform within a church founded by someone who was crucified. Some think structural and procedural changes will do the trick. Still others focus on the need for spiritual renewal. The sex abuse crisis has exposed a real sickness in the church, and some combination of structural, cultural and spiritual renewal will be needed.

Hasn't that been what the pope has been calling for? In things little and large, symbolic and real, he has been slowly changing the culture of the Vatican. Moving out of the papal apartments was not only symbolic, it also means the pope is not so isolated and exalted. The use of synods to actually discuss issues, and not simply rubber stamp what the Curia wants, has caused agita to some, but it also is providing the wellsprings of renewal in the church's teaching about, and ministry to, families. Developing alternative methods of collecting information about candidates for the episcopacy helps minimize the often corrupting role of nuncios, many of whom are clericalist to an outrageous degree and deeply suspicious of the role of local bishops' conferences in decision-making.

The pope's daily sermons are an invitation to all of us to drink deeply at the font of sacred Scripture, to be nourished by the Word of God, presented in such accessible and homey and challenging ways by Papa Bergoglio. Call me silly, but the frayed fabric on the pope's cassock also speaks of an indifference to the stuff of this world that is refreshing and evangelical. Most of all, Pope Francis' tireless call to all of us to go to the margins and encounter the poor of the world keeps the church from the kind of self-referential ecclesial life that bred the clericalism and spiritual sloth that made the sex abuse crisis possible.

No one, to my knowledge, has provided a convincing explanation of why, in the middle of the twentieth century, the abuse of children by clergy became so frequent as to cause this crisis. The reasons are complicated and many I suspect. There is no silver bullet explanation to why this happened and we can all hope the predications are right that this shows no sign of recurring on the massive scale we witnessed during the peak of the abuse in the 1970s.

But, the sin exposed a deeper sickness. What is obvious now is that the cover-up of that abuse was tied to a clerical culture that had become self-satisfied and not self-abnegating, that was proud and not humble, self-absorbed and not missionary, sick and secretive, not healthy and transparent. Pope Francis, with all the many and varied tasks he must face on a daily basis, seems to have recognized that it is time for drastic action, and that is why he has called this meeting. It is important that he did not simply gather Curial cardinals: Only when bishops in the field feel a sense of accountability to one another, and not merely to Rome, will the ecclesial culture return to health. There is a Catch-22 at work here: It is far from clear the bishops have the moral capital to exercise meaningful leadership, so I hope the pope can give them a lift. Still he is right not to simply think this mess can be solved by fiat from Rome.

Will it work? I suppose that depends upon what you mean by work. Again, we worship a crucified God so concepts like "success" have no place in the Catholic lexicon. I will close today with a great quote I have cited before. It is from Marlborough: His Life and Times by the great man's descendent, Winston Churchill. He is looking back at the great military successes of the year 1706, and at the human folly that was about to throw away their fruits. He writes:

The victories of Ramillies and Turin: the relief of Barcelona; the capture of Antwerp and a dozen famous fortresses in the Low Countries; the French expelled from Italy; Charles III entering Madrid; the complete suppression of France upon the seas and oceans – all these prepared a broad, an easy road along which the signatory states of the Grand Alliance, who had striven so hard against misfortune, could walk to peace and plenty. But by the mysterious law which perhaps in larger interests limits human achievement, and bars or saves the world from clear-cut solutions, this second revival of the allied cause led only to a second decline.

The phrase "bars or saves the world from clear-cut solutions" should be on the lips of everyone clamoring for reform. We must leave some room for the Holy Spirit to act. We must admit that we are all of us sinners, all of us capable of the most abjectly sinful and the most altruistic behaviors. We must remember, too, the "larger interests" manifested in the birth of Isaac, the burning bush, the cross at Golgotha, the lives of the saints and the deaths of the martyrs, and in our human follies, our happy faults that won for us so great a savior. This is not a time for management consultants. It is a time for a more radical obedience to the Gospel and to the doctrines of the church and the teachings of the Second Vatican Council. The tools of renewal are there. Pope Francis has been telling us that for five years. Perhaps now the church is ready to listen.

Column | Not all church reforms are equal or advisable

Media outlets highlight division through coverage of US bishops' meeting

Cardinal: No one has right to demand a pope's resignation