by Michael Sean Winters
Accountability
Opinion
This article appears in the The McCarrick report feature series. View the full series. 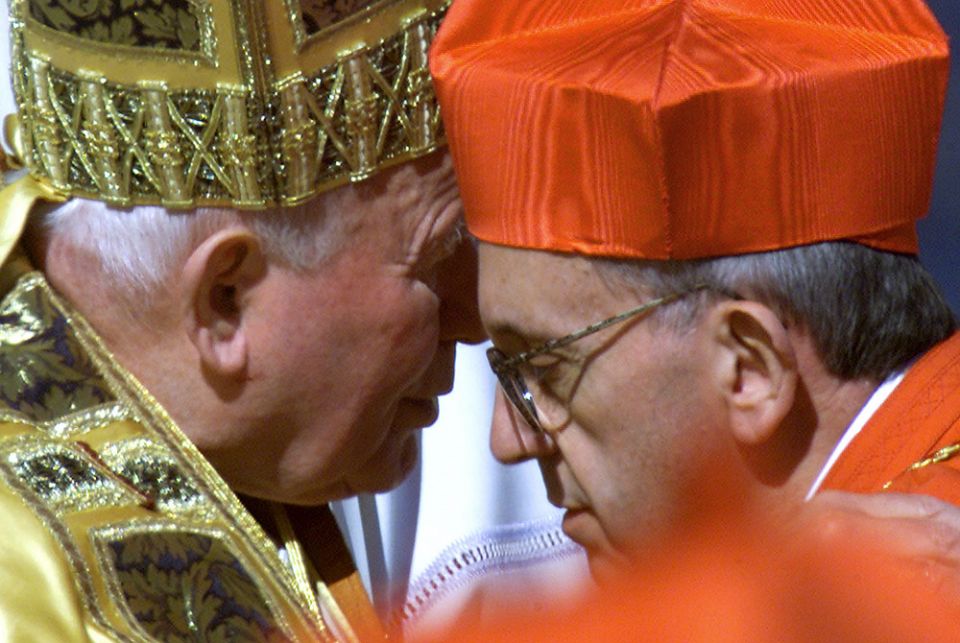 Mark Twain's darkly brilliant short story "The Man That Corrupted Hadleyburg" is not really about the man, it is about the town. The previously morally incorruptible townspeople are willing to tell lies to others, and finally to themselves, in order to collect the sack of gold that has been left at the home of Edward and Mary Richards. Eventually, it is the Richards themselves who end up with the money, but also with the knowledge that their lie, though unmasked, was the same as that of the others. They die of grief and shame, never spending the money.

The "Report on the Holy See's Institutional Knowledge and Decision-Making Related to Former Cardinal Theodore Edgar McCarrick" is not really about McCarrick either. Yes, he is the one around whom the rumors of scandal swirled for years. He is the one whose sexual misdeeds are catalogued in all the brutality of a forensic accounting. He is the one who was stripped of his cardinalate and then of his priesthood. But the report is really about the ways the culture of the Catholic hierarchy dealt with the sin and crime of sex abuse, and how that culture changed over the course of four pontificates.

As outlined in the executive summary released with the report, the principal culprit in the promotion of Theodore McCarrick through the ranks of the hierarchy was St. Pope John Paul II. There is no suggestion John Paul II lacked integrity, so no one need question his canonization, although its speed now seems imprudent. But anyone who insists on calling him "John Paul the Great" is a fool, his cult should be abandoned, and schools (especially schools) that bear his name should be renamed. The greatest self-inflicted wound in hundreds of years was the clergy sex abuse crisis and this report confirms the degree to which John Paul's failure to confront that crisis was a failure of leadership of the highest and most consequential order. 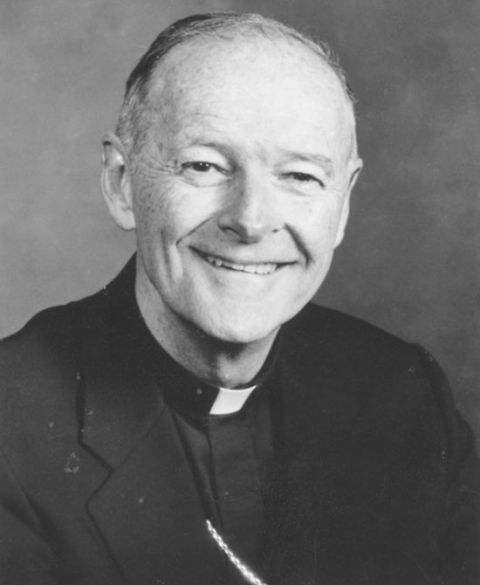 This should not really be news seeing as McCarrick was named bishop of Metuchen, New Jersey, archbishop of Newark, archbishop of Washington and, finally, cardinal-priest of the Roman Church, all by the late Polish pontiff who also found it easy to ignore allegations against Fr. Marcial Maciel Degollado, the depraved founder of the Legionaries of Christ.

"The evidence shows that Pope John Paul II personally made the decision to appoint McCarrick [to Washington] and did so after receiving the counsel of several trusted advisors on both sides of the Atlantic," the executive summary states. It goes on to note the allegations "were summarized in a 28 October 1999 letter from Cardinal John O'Connor, the Archbishop of New York, to the Apostolic Nuncio, and were shared with Pope John Paul II shortly thereafter."

The report indicates that rumors of sexual misconduct had kept McCarrick from being promoted to three other cardinalatial sees, but that in the spring of 2000, he asked the nuncio, Archbishop Gabriel Montalvo, to make written inquiries of the four bishops in New Jersey to see if the allegations were true, three of whom provided inaccurate or incomplete testimony at the time. They were McCarrick's proteges, so why would anyone be surprised they were not more forthcoming?

Nor should anyone be surprised that such a limited investigation failed to yield very much evidence, and the Vatican had not received a credible allegation directly from a minor or an adult, so "McCarrick's supporters could plausibly characterize the allegations against him as 'gossip' or 'rumors.' "

The report makes an assertion that we have heard before, albeit in more guarded language here. "Though there is no direct evidence, it appears likely from the information obtained that John Paul II's past experience in Poland regarding the use of spurious allegations against bishops to degrade the standing of the Church played a role in his willingness to believe McCarrick's denials," the report states.

This theory no longer carries much weight. By the time McCarrick was appointed to Washington, John Paul II had been pope for 22 years. Communism had ceased to control Poland for 11 years. And John O'Connor was not a Communist agent. John Paul's unwillingness to investigate the grave allegations contained in O'Connor's letter, written while the cardinal was already dying from terminal brain cancer, is profoundly damning.

John Paul II's obvious role in McCarrick's rise was obscured for many by the allegations contained in the screed issued in 2018 by disgraced former nuncio Archbishop Carlo Maria Viganò. It was obvious on a first reading that the purpose of Viganò's manifesto was not to get at the truth about McCarrick but to try and ignite a putsch against Pope Francis.

The report now gives us an additional reason for Viganò's tirade: The lady doth protest too much. The summary indicates that when new allegations arose in 2012, and Viganò reported them to the new prefect of the Congregation for Bishops, Cardinal Marc Ouellet "instructed Viganò to take certain steps, including an inquiry with specific diocesan officials and Priest 3, to determine if the allegations were credible," the summary states.

"Viganò did not take these steps and therefore never placed himself in a position to ascertain the credibility of Priest 3. McCarrick continued to remain active, traveling nationally and internationally." So much for Viganò's desire to be seen as a crusader for truth!

Pope Benedict XVI does not come off as badly as his predecessor in the summary, but the picture painted is one of ineffectiveness. When provided additional information in 2005, the German pope at least moved up the timing of McCarrick's retirement. His curia also issued what the executive summary calls "indications" regarding McCarrick, essentially instructing him to keep a low profile, which he more or less ignored. These were at the heart of Viganò's original charges. But no canonical process was begun to get to the truth of the allegations, still less to impose any canonical penalties. It is important to note, however, that at this point, there were no allegations of sexual impropriety involving a minor.

When Pope Francis was elected in 2013, McCarrick had been retired for seven years. The new pope would have seen him at the going-away celebration for Pope Benedict and at the meetings of the cardinals in advance of the conclave. He certainly would not have known anything about any "indications" against McCarrick. Once elected, there seemed more important issues to examine than allegations dating from the 1980s against an aged, long-retired cardinal. Francis decided to let sleeping dogs lie and, as we all know from the pope's handling of the sex abuse mess in Chile, Francis had not yet come to grasp the moral and spiritual enormity of inaction.

Once an allegation against a McCarrick involving a minor was deemed credible, the procedures put in place to deal with such allegations against an average priest proved eminently serviceable against McCarrick: He was removed from public ministry and eventually defrocked.

The full report will no doubt fill in the details of the rough outline the executive summary provides, but we all know the story by now. During the pontificate of John Paul II, most hierarchs followed the lead of the Vatican, believing that revelations about the truth of clergy sex abuse would cause "scandal," finding false rationalizations in the Gospel for excusing the criminal behavior of abusive clergy, refusing to listen to the victims and their families. If you want to see how far the church has come from the denialism of the John Paul II era, consider these words of Cardinal Pietro Parolin that introduce the report:

We publish the Report with sorrow for the wounds that these events have caused to the victims, their families, the Church in the United States, and the Universal Church. As the Pope has done, I too was able to view the testimonies of the victims contained in the Acta on which the Report is based, and which have been deposited in the Holy See archives. Their contribution has been fundamental. In his Letter to the People of God of August 2018, the Holy Father Francis wrote, with regard to the abuse of minors, "With shame and repentance, we acknowledge as an ecclesial community that we were not where we should have been, that we did not act in a timely manner, realising the magnitude and the gravity of the damage done to so many lives".

The only heroes in this report are the victims and their advocates. They saw what pope and bishops did not, that the "light of the Gospel" was being invoked but not followed. The sex abuse crisis that marked the turn of the millennium needed the light of day before it could receive the light of the Gospel. The refusal to face, or even inquire into, the allegations about Theodore McCarrick are indicative of a hierarchic culture that was deeply, profoundly flawed and that has only now begun to really change.

At the end of Twain's story, the citizens of Hadleyburg change the motto of their town by removing one word, removing the "not" from "Lead us not into temptation." In this McCarrick report, we see that the temptation to protect the institution resulted in a gross betrayal of the institution and that St. Pope John Paul II set the norms and tone that led to the real scandal.

The relationship of grace and nature will ever be one of the thorniest of theological conundrums, but in this case the moral lesson is easy to draw: If you forget your humanity, you not only risk becoming a monster, you create a culture that lets monsters flourish, and hiding behind the Gospel is the surest way to undermine the saving ministry of Jesus Christ.