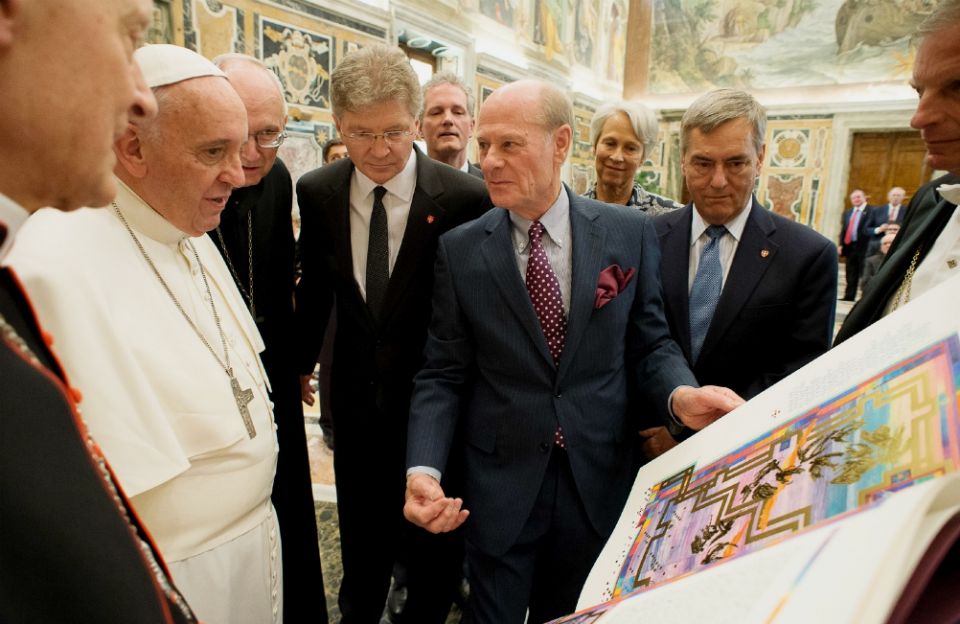 Pope Francis accepts the final volume of The St. John's Bible at the end of an audience with the Papal Foundation at the Vatican in April 2015. (CNS/L'Osservatore Romano)

If anyone doubts the ability of the sacred Scriptures to reach across the centuries and speak to people in our own time as words freshly spoken, Sunday's second reading from the Epistle of James, Chapter 2, Verses 1-5, answers such doubts:

My brothers and sisters, show no partiality as you adhere to the faith in our glorious Lord Jesus Christ.

For if a man with gold rings and fine clothes comes into your assembly, and a poor person in shabby clothes also comes in, and you pay attention to the one wearing the fine clothes and say, "Sit here, please, " while you say to the poor one, "Stand there, " or "Sit at my feet, " have you not made distinctions among yourselves and become judges with evil designs?

Listen, my beloved brothers and sisters. Did not God choose those who are poor in the world to be rich in faith and heirs of the kingdom that he promised to those who love him?

The text deserves to be printed it in its entirety because each verse seems to speak to the very heart of the crisis afflicting the Catholic Church this summer.

Yes, we call this "the clergy sex abuse" crisis but it is more about bishops who failed to respond with horror to abuse than the abuse itself. Yes, some argue the root cause is homosexuality among the clergy, and as openly gay Fr. James Alison pointed out (here and here), that explanation is not exhaustive and is easily distorted, too. Others, including myself, have argued that a kind of clericalism is the problem, and I stand by that diagnosis, but the letter from James invites us to precision: Clericalism that is oriented to worldliness is the problem. Worldliness is the sin the apostle James was diagnosing and it is the very heart of the crisis.

I do not pretend to be someone who knows former Cardinal Theodore McCarrick well, but we were at functions together more than a dozen times during his tenure in Washington. Fr. Peter Daly nailed it when he described McCarrick as skating "through life on his charm, popularity, glibness, fundraising skill and political savvy." Glibness is not a personality trait that is becoming in anyone, but especially not in a man of the cloth.

Friends who run important charitable arms of the church always cultivated their relations with the cardinal because he was known as master fundraiser. The entire Papal Foundation was his baby, and it turned out to be a rotten child, granting the uber-rich access to the pope and his entourage in exchange for pledges of a million dollars, a kind of inculturated simony.

Is it entirely surprising that a man who, in the words of James' epistle, paid attention "to the one wearing fine clothes," should rise to prominence in the U.S. church? In the Northeast and Midwest, our massive infrastructure was once a crowning jewel of institutional heft. Now, pastors and especially bishops spend an inordinate amount of time raising money to keep the crumbling of that infrastructure to a minimum. A "good pastor," destined for advancement, is one who raises money, not spirits.

I understand that keeping the parish school open is a great thing. I support strong music programs, and preserving our architectural heritage is a civilizational responsibility. But these are worthy goals only insofar as they can be achieved without reducing our clergy to the role of perennial, albeit spiritualized, fundraiser.

The distortion this has wrought in the life of the church is obvious. Were we still the church of the workingman, as we were throughout the 19th and most of the 20th century, the bishops' own university would not be hosting a three-day conference on the "dignity of work" that features many speakers but not a single labor leader. Last year's conference celebrated — I had almost written "canonized" — libertarian hero Charles Koch, a man whose views on economics and society could scarcely be more opposed to those of Catholic social teaching.

These conferences are sponsored by Tim Busch's Napa Institute and this year's event will be preceded by a one-day conference calling for "authentic reform" of the church in the light of this summer's scandals. I probably will not be able to protest the event, but if I could, I would carry a sign that reads, "Catholic Church is not for sale."

The group Legatus, which was started by conservative donor Tom Monaghan, has decided to withhold its annual tithe to the pope because it is concerned about Archbishop Carlo Maria Viganò's dossier. To belong to Legatus, a member must run a business with revenue of at least $7 million and 49 employees. Just the kind of people who expect to be paid attention to and invited to sit in the place of honor. Just the kind of group that needs religion to be reduced to sexual ethics, lest anyone start challenging worldliness per se, or, worse, discussing camels and needles' eyes. Just the kind of group that indulges charity to avoid justice. Self-satisfied, self-congratulatory, you know the type. "I thank thee, Lord, that I am not like other men." They can take their money and put it, well, put it someplace special.

The cultural myopia of Americans, large and consequential, is only part of the reason the church in the United States is out of touch with the universal church at this moment in history. The larger reason is this fixation with money, this acquiescence in capitalism, even perpetuating the coarse Cold War equating of capitalism with godliness, and the resulting worldliness of the American church.

Is there any doubt that it is this Mammon worship day-in and day-out that in large part accounts for the fact that the opposition to Pope Francis is so overwhelmingly American? Yes, the latent Jansenism of the U.S. church is part of the story too, but more and more I am convinced that we Americans have become dull to the Gospel for the simple reason that it is good news for the poor and we are no longer poor.

I hope that when Cardinal Daniel DiNardo, president of the U.S. Conference of Catholic Bishops, meets with Francis later this week, he will warn the pope that if he does not offer some tip of the papal zucchetto to Legatus and the Tim Busches of the world, he can expect to receive perhaps half as much money as the Vatican currently gets from the U.S. church. I do not doubt for a second that the pope would say, "Fine."

That would be a first, significant step toward authentic reform: ridding the U.S. church of its dependence on the uber-rich. Once the money goes, the rest of the worldliness might follow.

A version of this story appeared in the Oct 5-18, 2018 print issue under the headline: Worldliness is the very heart of the Catholic Church's crisis .

Column | Worldliness is the very heart of the Catholic Church's crisis