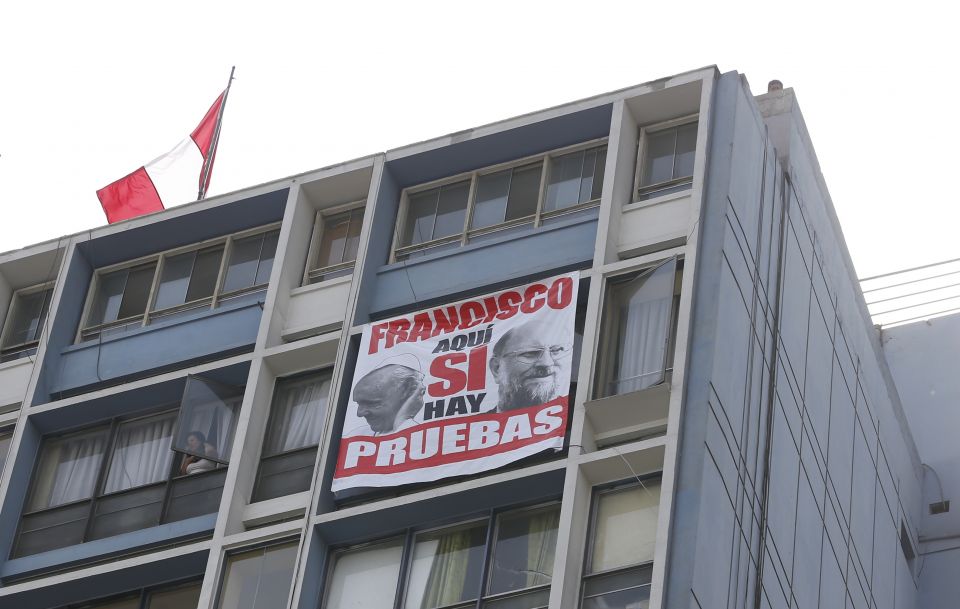 A protest banner that says in Spanish, "Yes, Francis, here there is proof," hangs near the cathedral in Lima, Peru, Jan. 21. The banner protests Pope Francis' defense of Bishop Juan Barros of Osorno, Chile, who is accused of protecting a priest the Vatican found guilty of sexual abuse of minors. (CNS/Paul Haring)

In an online editorial Jan. 23, NCR took Pope Francis to task for the pain he caused survivors of sexual abuse by clergy. Twice and very publicly, he dismissed the testimony of abuse victims and charging them with "calumny" against a bishop he had installed in a diocese in southern Chile over the advice of other Chilean prelates and over the loud, ardent protests of Chilean lay Catholics.

Francis dismissed out of hand testimony that Chilean Bishop Juan Barros Madrid of Orsono had for years ignored or covered up evidence that his mentor Fr. Fernando Karadima was abusing young men. Despite at least three survivors' public accounts to the contrary, Francis insisted — in harsh, judgmental language — that he had seen no evidence against Barros.

We recognized in this an all-too-familiar script: Discredit the survivors' testimony, support the cleric in question, and bank on public attention moving on to something else. We said in that editorial: Francis' "remarks are at the least shameful. At the most, they suggest that Francis now could be complicit in the cover-up." We continued:

History has shown that the great number of survivors were telling the truth. Any reform that has happened in the church is due to their courageous resolve. The hierarchy was caught in its lies and humbled, but not before unknown numbers of believers were driven out of the Catholic Church. The scandal has cost the church moral authority, credibility and billions of dollars.

In recent years, we had thought chastened church leaders had begun to correct mistakes of the past. We were wrong. The supreme pontiff apparently has not learned this lesson.

Read this next: Advocates welcome investigation into abuse cover-up claims in Chile

It was a harsh editorial, a hard one to write, but we were and are convinced that it is on point.

The above puts into context our endorsement of Francis' decision to send Archbishop Charles Scicluna of Malta to Chile to take testimony in the Barros case (see story on Page 1). Sending Scicluna is a smart move, and it will have consequences. Good consequences we hope, but that remains in question.

Francis could have chosen no better delegate to send than Scicluna. By all accounts, Scicluna does not shy away from tough questions and isn't intimidated by rank or prestige. He is that rare individual who has credibility inside the Vatican and with the abuse advocacy community.

In 2001, then-Cardinal Joseph Ratzinger, the powerful prefect of the Congregation for the Doctrine of the Faith, made the fateful decision to address the scandal of the abuse of minors by clergy and the cover-up of that abuse by the hierarchy. Scicluna was his point man. Scicluna's work in 2005 forced Fr. Marcial Maciel Degollado, the notorious founder of the Legionaries of Christ, out of public ministry and brought justice, albeit imperfect justice, to that case.

In 2014, Scicluna helped the Archdiocese of St. Andrews and Edinburgh, Scotland, find some peace and closure after the disgrace of three decades of sexual misconduct by Cardinal Keith O'Brien.

Success in Chile is not guaranteed, and Francis' recent actions in Chile won't make Scicluna's already tough job any easier. Catholics in Chile made clear following the Vatican's Jan. 30 announcement that Scicluna has to earn the trust of the local church. He will have to prove he has "independence from his superior, who is the pope," and he will have to deliver a transparent investigation with a demonstrably fair outcome.

Much more is at stake than just the standing of one bishop in a small diocese in Chile. Unfortunately, Francis' defense of Barros was only the latest in a number of missteps he has taken in his nearly five-year papacy on the issue of clergy sex abuse. This has led some to wonder if he fully understands how the abuse scandal has damaged the church in fundamental ways.

Francis has weathered opposition in the Roman Curia and certain branches of the hierarchy because he is so incredibly popular among rank-and-file Catholics. Some of that popularity eroded over the last month.

Francis has an ambitious reform agenda for the church, an agenda he believes he was elected to implement. His actions in Chile in January weakened his reform efforts. If he can't fix this, his larger agenda will be in jeopardy.