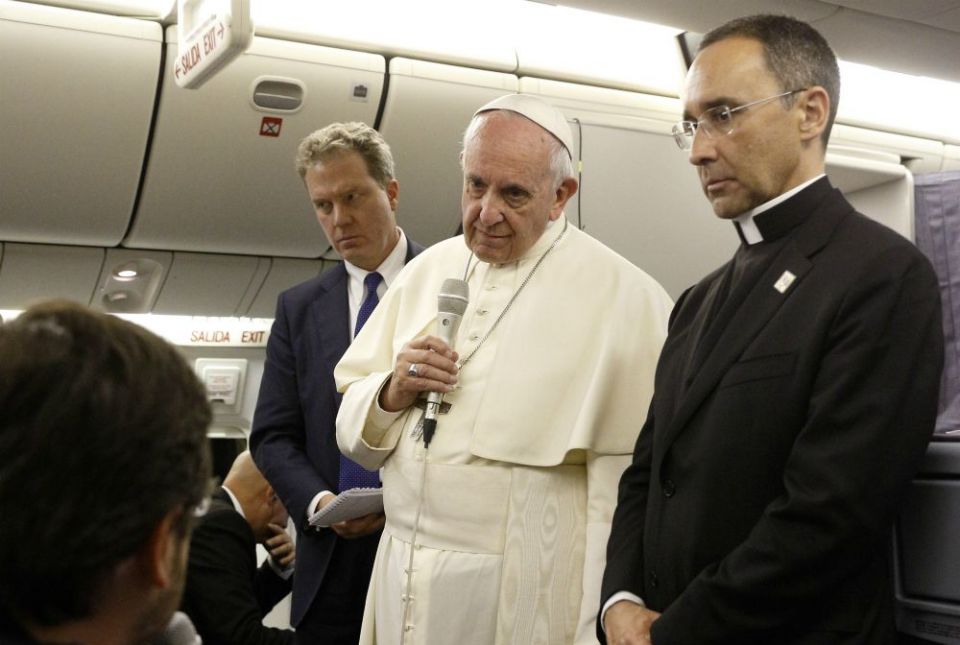 Pope Francis listens to a question from a journalist aboard his flight from Lima, Peru, to Rome Jan. 21. (CNS/Paul Haring)

It is hard even to imagine the pain survivors of clergy sexual abuse have had to endure. After being raped or brutalized by people their communities had taught them to see as nearly infallible, many were left silent for decades, ashamed or just unable to speak.

When they did come forward, their motives were questioned and their integrity impugned. They were savaged, re-victimized, in court proceedings and public announcements, as bishops, diocesan lawyers and church officers denied their charges.

History has shown that the great number of survivors were telling the truth. Any reform that has happened in the church is due to their courageous resolve. The hierarchy was caught in its lies and humbled, but not before unknown numbers of believers were driven out of the Catholic Church. The scandal has cost the church moral authority, credibility and billions of dollars.

In recent years, we had thought chastened church leaders had begun to correct mistakes of the past. We were wrong. The supreme pontiff apparently has not learned this lesson.

Within the space of four days, Pope Francis twice slandered abuse survivors. On the papal flight from Peru Jan. 21, he again called testimony against Chilean Bishop Juan Barros Madrid "calumny." Despite at least three survivors' public accounts to the contrary, he also again said he had not seen evidence of Barros' involvement in a cover-up to protect notorious abuser Fr. Fernando Karadima.

These remarks are at the least shameful. At the most, they suggest that Francis now could be complicit in the cover-up. The script is all too familiar: Discredit the survivors' testimony, support the prelate in question, and bank on public attention moving on to something else.

The insistence with which Francis defends Barros is mystifying. Three separate journalists on the papal flight gave the pope opportunity to say why exactly he believed the bishop instead of the survivors accusing him. The second journalist to ask Francis about Barros on the flight was a Chilean woman. As she spoke to the pope, her voice cracked with nervousness at questioning the church's top leader. She asked: "Why are not the victims' testimonies proof for you? Why do you not believe them?" The pope gave no satisfying answer, only repeating a claim of "no evidence" against the bishop.

Unfortunately, Francis' defense of Barros is only the latest in a number of statements he has made in his nearly five-year papacy that have hurt survivors, and the whole body of the church.

The pope's statements on zero tolerance for abusers have been strong, but again and again he has refused to deal decisively with those who provided cover for the abusers. When he met with the U.S. bishops in September 2015, for example, he praised the "courage" they had shown in the "difficult moments" of the abuse crisis and even noted "how much the pain of recent years has weighed upon you."

One psychologist who counsels sex abuse survivors said at the time that those comments left survivors "punched in the soul-ar plexus by a Catholic pope who discounted their suffering to hold up the supposed suffering of the bishops."

In Chile last week, Francis held a meeting with members of the country's clergy. He recounted several kinds of pain clergy abuse had caused in the country, including that of the victims and their families. But he also spoke of pain suffered by priests not caught up in the scandal.

"I know that at times you have been insulted in the metro or walking on the street, and that by going around in clerical attire in many places you pay a heavy price," the pope told the clergy.

How can the pope compare being insulted on the metro with the terror of a child raped? How?

Apparently, even one of Francis' closest collaborators was flabbergasted by Francis' remarks two days later, when he slapped away journalists' questions about Barros and first called the charges against the bishop "calumny." In a bluntly critical statement, the likes of which we have struggled to find parallel in recent church history, Boston Cardinal Sean O'Malley said the pope's slander against survivors had caused them "great pain."

Here, we must applaud O'Malley's action. He could have quietly spoken to Francis. Perhaps he knew that would have left abuse survivors yet again without any prominent defender.

Francis has a beautiful metaphor for the work of bishops and priests as shepherds who walk among the flock and at times behind the flock, allowing sheep to follow the path they sense. The pope had ample warning of what to expect in Chile. That he didn't follow his own advice and listen to the people is much more than disappointing.

Francis' colorful railings against clericalism are often recounted. He has scolded the Vatican bureaucracy for being gossips and careerists and has described the "sicknesses" that afflict them. In 2014, he said one such ailment is the "mental and spiritual petrification" of those "who have a heart of stone and a stiff neck."

Would Francis be chagrined to learn that that is how many would describe his words in Chile and on the papal plane? When it comes to confronting the clericalism that is the foundation for the abuse scandal, the pope's stony countenance is part of the problem. The question we must ask is: Why isn't Francis listening?

The roots of the clergy sex abuse crisis