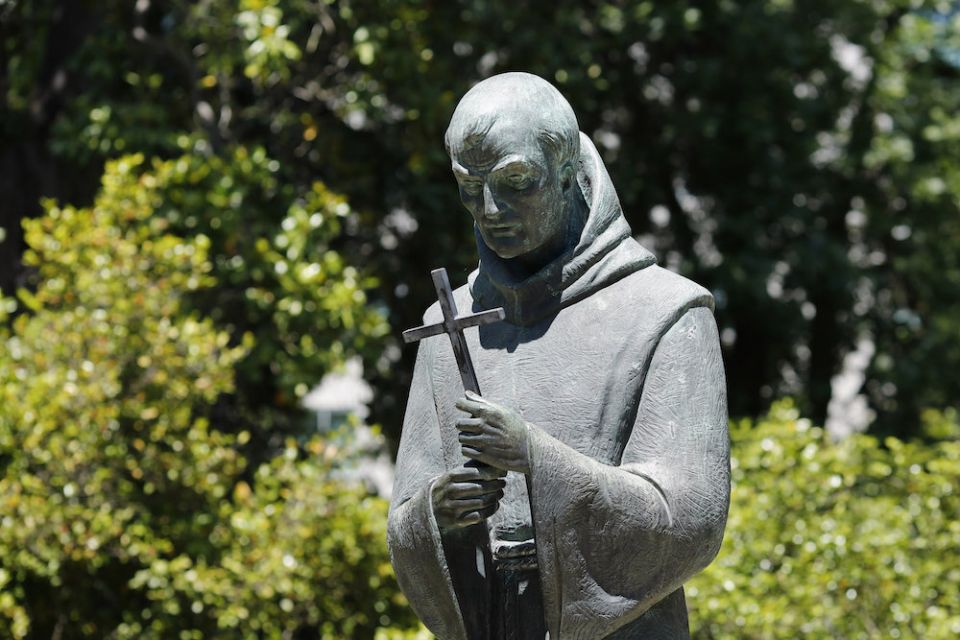 A 2015 photo shows the statue of St. Junípero Serra in Sacramento, California, that was torn down by a group of demonstrators late July 4. (CNS/Nancy Wiechec)

On Juneteenth this year, people in the San Francisco Bay Area took to the streets to mark the day in 1865 when the last enslaved people in Texas learned they were free. That evening, protestors toppled a 30-foot bronze statue of St. Junípero Serra at the Golden Gate Park, splattering it with red paint. Similar incidents later occurred in Los Angeles and Sacramento.

These actions in California have ushered in a new reckoning for the Franciscans.

Serra, an 18th-century Franciscan priest, is credited with bringing Christianity to California and starting the first nine of 21 Spanish missions in the state. But his critics consider him to be one of California's earliest colonizers under whose watch Native Americans were beaten and brutalized.

A product of his time

For Franciscans in the United States, Serra is an important figure. They acknowledge his massive contribution to the church and are yet mindful of his complicated legacy and history.

"For me, he is somebody who should be admired for his persistence, his dedication, his faith and his great love for people. On the other hand, he was a person of his time and place — he had his blind spots," said Franciscan Fr. Daniel Dwyer, associate professor of history at Siena College in Loudonville, New York.

To understand Serra, he said, is to take into context his times. "His heroes were people like other missionaries who've gone to other parts of the world, and I don't think he or anybody in his circle, you might say, really understood enough to respect non-European peoples," said Dwyer.

Franciscan Fr. Dan Horan, theologian and professor at Catholic Theological Union, Chicago,   identifies with Serra, in part because Serra himself was a university professor. But he is aware that cultural assumptions of Serra's time are different from the current age. 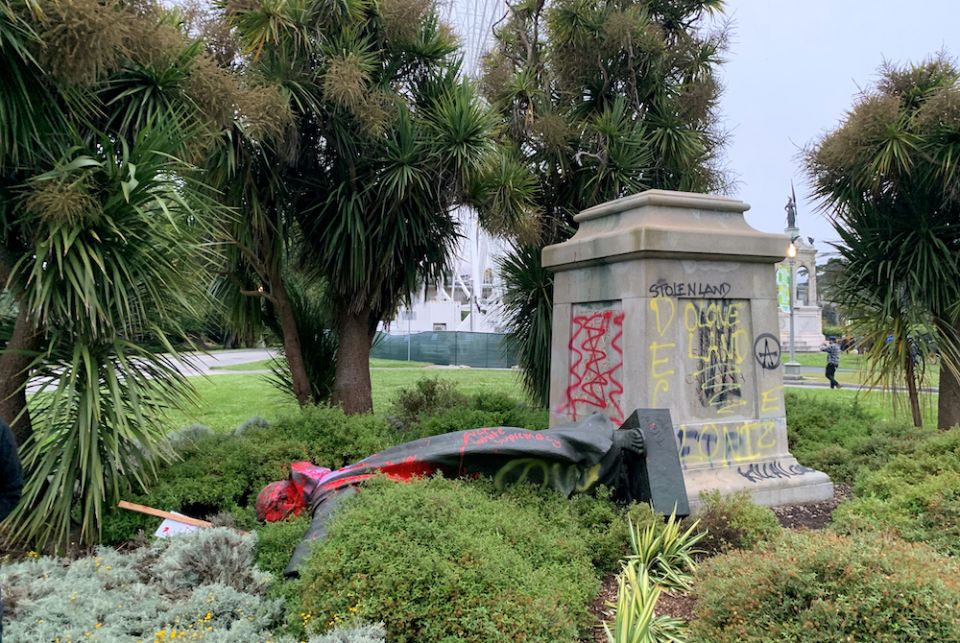 A vandalized statue of St. Junípero Serra in San Francisco is seen June 19. The Spanish Franciscan founded several missions in what is now California. (CNS/Reuters/David Zandman)

"I think it's fair to those particularly steeped in the history of the Americas, the church and the various waves of colonization, to be straightforward about the role of the missions, the role of the church and, to some extent, the role of Junípero Serra in creating a context that was not always good and healthy and supportive for the Native peoples of the land," said Horan.

Serra has been the subject of controversy over the treatment of Indigenous peoples. Critics say that under the watchful eye of Serra, called the "founding father of California," Native Americans were pressed into forced labor, mistreated and infected with diseases they had no resistance to. Those who were brought into the missions were not allowed to leave, and if they tried to flee, were severely beaten.

When Pope Francis canonized Serra during his 2015 visit to the United States, he faced criticism from Native American groups who said Serra was undeserving of sainthood.

In an open letter to Francis, leaders of the Pechanga Band of the Luiseño Indians wrote that Serra's missions "killed between 9,000 to 13,500 of our ancestors," which "triggered a collapse of our Indigenous societal structure and way of life and set into motion the atrocities and hardships that our people endured for nearly two centuries."

Franciscan historians point out that during the time of Serra, the Catholic Church and Spanish crown were intertwined with one another, often making it difficult to differentiate between the two.

Franciscan Fr. William "Jud" Weiksnar, of the Franciscan Friars of the Holy Name Province, said that Serra was a product of the "Doctrine of Discovery," which provided church sanction for European Catholic colonizers, and to judge his actions based on current beliefs would be inaccurate.

"In the midst of a culture that was all about exploiting the land and exploiting the people, he had, at risk to himself, taken stands against that. Was he operating under a 21st-century mentality? Of course, not! He was a complicated, fascinating, flawed but holy person," said Weiksnar.

Franciscan Fr. Jack Clark Robinson, provincial minister of Our Lady of Guadalupe Province in Albuquerque, New Mexico, said that the papal encyclical, Sublimis Deus, by Pope Paul III in 1537, forbid the enslavement of Indigenous peoples, and the punishment was excommunication.

"But the Spanish king parked outside the Vatican, till Pope Paul revised the document and removed the penalty," said Robinson.

Related: Doctrine of Discovery: A scandal in plain sight

Robinson agreed with protestors calling for the church to look at its problematic past. "There are many things that the church did that did not live up to the ideals of the Gospel. But it wasn't because of the lack of trying. The church was connected with the empire. … It's my personal belief that anytime the church and state get in bed together, the Gospel suffers," said Robinson.

Supporters of Serra look upon him as a vocal advocate for Native Americans. Historians say that Serra went to Mexico many times to defend the Native population from the atrocities of Spanish soldiers. He was paternal toward the Indigenous people and is seen as someone who heroically embraced the idea of spreading the Gospel to the New World when he was well into his 50s. Serra's missions became the basis of modern California, say historians.

"But he has become a very convenient symbol of all the evils of colonization, imperial expansionism and the evils of racism," said Robinson.

Franciscan Fr. David Gaa, the provincial minister of the Franciscan Province of Saint Barbara based in Oakland, California, said the toppling and removal of Serra's statues is a "reevaluation of history and reality."

"He [Serra] has become the personification of all that was bad about the mission system — the decimation of the Native people by diseases, the encounter of the culture. The mission system lasted for around 65 years, and for some, Serra is the embodiment of all of that. So when talking about removing the statues from public lands, I don't think it has much to do with Serra," said Gaa.

With Serra, the particular challenge for the church is how to grapple with his humanity. Horan points out that most modern day saints made mistakes and were imperfect, including as recently as Pope John Paul II, who was canonized quickly, in 2014, after his 2005 death.

"How do we reconcile the fact that late in his papacy, he denied the reality of the sexual abuse crisis? He was very involved with the promotion and quite possibly, the cover up of some very senior officials, including religious order founders, that he favored," said Horan.

Horan suggested that people move away from the magical thinking around saints and look at them more like Christian men and women who struggled to live the Gospel, despite their imperfections and mistakes.

Robinson said that the study of history should always be a "conversation." One needs to take it further and not be "bound by it."

Across California, officials are debating the removal of Serra statues from public land. Los Angeles Archbishop Jose Gomez warned that all public statues of Serra should be removed or relocated to protect them from vandalism and desecration, while some Indigenous activists view the statues of Serra in public places as a "celebration of our genocide," reported USA Today.

The California Catholic Conference of Bishops defended Serra, saying he made sacrifices to protect the Indigenous people from the Spanish conquerors.

Gaa said the Franciscans understand how a statue of Serra in a public place can be offensive to "people of goodwill."

According to Dwyer, unless the statues are a "magnificent work of art," they can be replaced. "It's not the end of the world."

The question to ask, said Weiksnar, is why was the statue erected? "The Confederate statues that were erected through much of the South was a way to intimidate African Americans well after the Civil War. So I'd be interested in the same question with Serra — why was that erected? And once we answer that question, I think we could answer should the statue stay up? Where should it go?" he said.

Horan feels drawn towards recognizing the greater symbolic value of the statues of Serra. "I don't think public statues are necessary, particularly in a civic place, that bring such pain and symbolize the unaddressed history that the church hasn't fully grappled with in society," he said.

All Franciscans who spoke to NCR see no problem with the removal of Serra's statues from public places, because there's still a place for Serra in the canon of saints.

"I recognize the good done by Serra, from my Catholic faith perspective. But I also appreciate where we are as a nation trying to deal with difficult historical questions," said Gaa.

Gaa said he's not in favor of a "triumphal or romantic perspective of the church of the past," instead preferring larger dialogue between the church and protestors to address the problematic history.

"The big problem I have with these statues of Serra that might be in front of city halls, is, what is the message we're trying to convey? What do these monuments represent?" he said.

"My main reality is that I would like the Franciscans to be part of the healing process, and not a barrier. And in that way, if the statues are a barrier to dialogue and conversation publicly, I have no problem with them being moved," said Gaa.

[Sarah Salvadore is an NCR Bertelsen intern. Her email address is ssalvadore@ncronline.org.]

Read this next: We have a story to tell: Indigenous scholars, activists speak up amid toppling of Serra statues
A version of this story appeared in the Aug 7-20, 2020 print issue under the headline: Franciscans grapple with colonial legacy of Junípero Serra .

Bishops seek answers about vandalism of churches and Catholic symbols