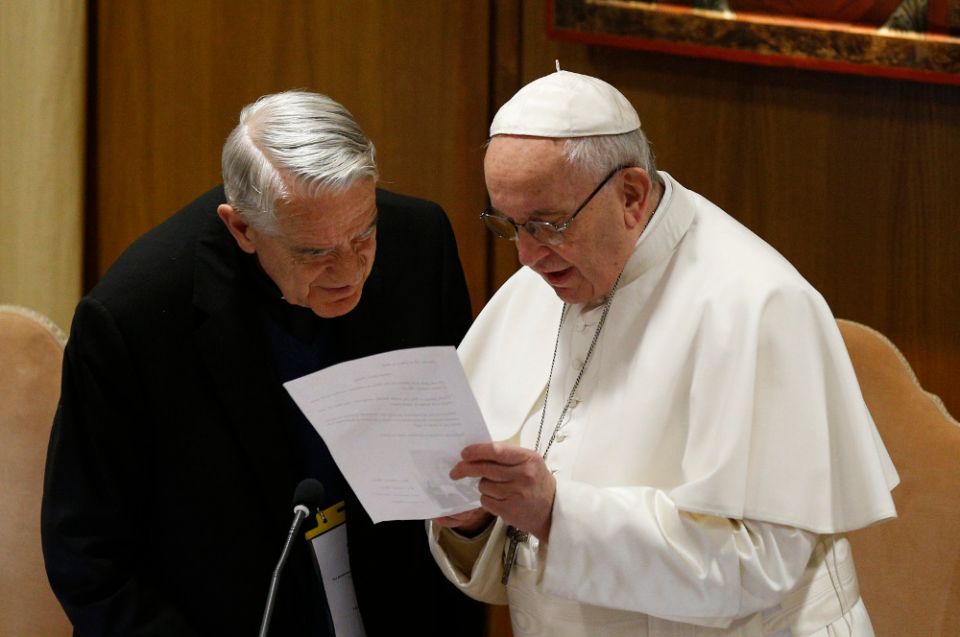 Pope Francis talks with Jesuit Fr. Federico Lombardi at the start of the third day of the meeting on the protection of minors in the church at the Vatican Feb. 23. (CNS/Paul Haring)

Vatican City — While the four-day Vatican summit on the protection of minors has ended, the work to ensure that laws and concrete actions are in place is just beginning, said Jesuit Fr. Federico Lombardi.

During a press briefing Feb. 24, Lombardi, who served as moderator of the Feb. 21-24 summit, said Pope Francis will soon publish a new set of laws and guidelines concerning child protection for Vatican City State.

The measures, he said, will be issued "motu proprio," on the pope's own accord, and will be "presented and published in the near future."

Another initiative that will be available in "a few weeks or a month or two" is a handbook or vademecum for bishops, prepared by the Congregation for the Doctrine of the Faith.

Lombardi told journalists that the handbook will list a set of guidelines and "will help bishops around the world clearly understand their duties and tasks" when handling cases of abuse. He said the pope also wants to amend the current law concerning the crime of a cleric acquiring, possessing or distributing pornographic images of minors by extending the age from 14 years old to include young people under the age of 18.

Lastly, Francis has also expressed his intention to establish task forces "made up of competent persons" that will assist dioceses and episcopal conferences "that find it difficult to confront the problems and produce initiatives for the protection of minors," especially when they lack the needed resources and skilled personnel.

Meanwhile, a number of survivors and advocacy groups were disappointed the pope and the Vatican did not go further with more direct mandates, especially in ordering bishops to implement what laws already exist.

Peter Isely, spokesman for the Ending Clergy Abuse coalition, said he wished the pope had told bishops to remove known abusers from public ministry immediately in order "to keep them from harming children. That's pretty simple."

Also, just as the pope had recently revised the catechism concerning the inadmissibility of the death penalty, Isely said the pope could have changed canon law to include zero tolerance for abusers and those who protect them.

Miguel Hurtado, a survivor from Spain, told Catholic News Service that the church still needs a clear mechanism or process for bishop accountability and making public the dismissal of a leader for negligence.

"This is what changes the hearts and minds," he said, "is seeing a colleague lose his job."

"Why don't we see bishops ordaining women? Because they know it is a red line and they will be excommunicated if they cross it. Covering up child rape is not a red line" if there are no clear and serious consequences that go with it, he said.

Hurtado said if the church fails to police itself, "what will prevent another crisis are the external checks and balances" of media outlets doing accurate investigative reporting, the trend of child victims speaking out sooner, and civil laws abolishing the statute of limitations on the abuse of minors.

Anne Barrett Doyle of BishopAccountability.org said in a press statement that the summit was only a failure in terms of needed internal reforms.

"But in a larger sense, it achieved a great deal" by increasing global awareness of clergy sex abuse and facilitating "connections between journalists and survivors from many countries," she said.

"This was public education on a massive scale," Doyle said.

In a statement provided to CNS, a group of U.S. women from Catholic Worker who were in Rome for the summit supported "Pope Francis placing the spotlight on the global sexual abuse. This is good and crucial."

"As Catholic Workers, people who have seen violence in so many forms, we resonate with his understanding that abuse of power is the root cause of the problem here," it said.

"But where are the concrete processes to guide the bishops in assuring accountability, transparency, and responsibility upon their return?"

As Francis "recognized that the outrage on the street with regard to sex abuse reflected the 'wrath of God,'" the Catholic Workers' statement said, there is the continued mission for all people of God: "to be that 'wrath' until the violence of clergy sex abuse and cover-up is eradicated."