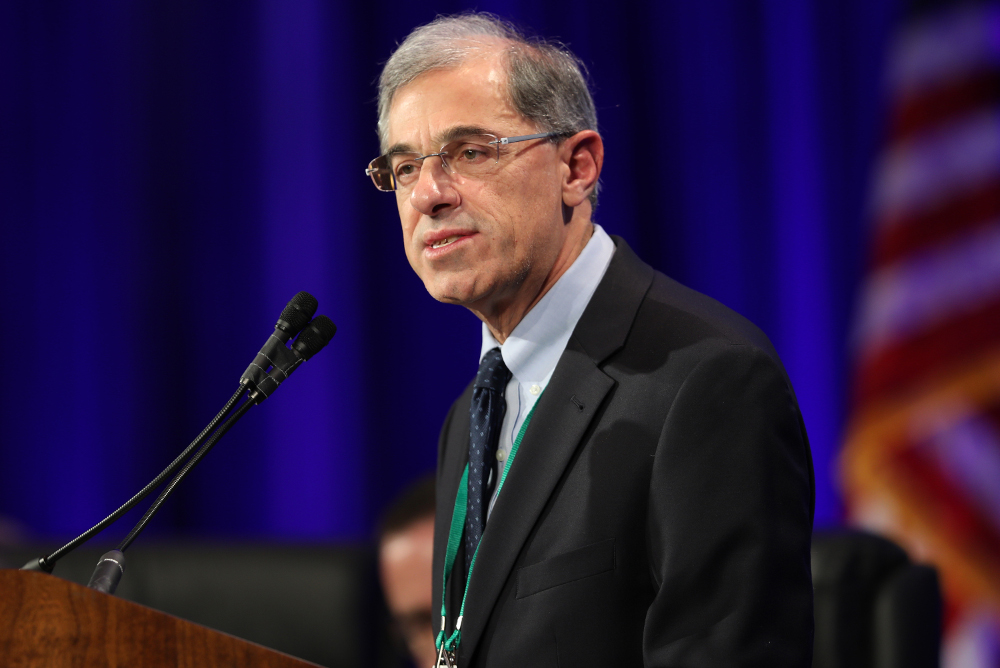 Francesco Cesareo, chair of the National Review Board, speaks Nov. 13 at the fall general assembly of the U.S. Conference of Catholic Bishops in Baltimore. (CNS/Bob Roller)

Bishops who have committed abuse, covered up abuse or failed to act on abuse must be held accountable and face consequences, the National Review Board chair said in a strongly worded presentation to prelates at their annual meeting.

Guilty bishops could be barred from membership in the national conference or from attending national meetings, said Francesco Cesareo, president of Assumption College in Worcester, Massachusetts, and chair of the group that advises the bishops on the issue of sexual abuse.

The review board also suggested that leadership of the U.S. Conference of Catholic Bishops could turn over its own files to the Vatican for investigation of any sexual misconduct or cover-up.

"It remains clear that some bishops have escaped the consequences of their acts of omission regarding abuse, and that little is being done to address this injustice," Cesareo said Tuesday morning at the gathering in Baltimore.

Cesareo later told NCR that the gravity of the current situation made action urgent and necessary.

"This is our second chance of doing this right," he said, referring to the bishops' actions in 2002 in Dallas. "I don't think we'll get a third chance.

In his remarks at the meeting, Cesareo said the bishops' response to the crisis has been "incomplete" and has not been sufficiently open and transparent.

"It has taken the intervention of the state and the media to fully expose the darkness of abuse in our dioceses," he said. "It is shameful that the sin of abuse was hidden and allowed to fester until uncovered by the secular world."

He called it "unbearable" that "innocent children and young people suffered because of the inaction and silence of some bishops."

The review board supports the recommendations the bishops were to vote on at the meeting, Cesareo said, even though "regrettably you will not be taking any action this week."

On Nov. 12, U.S. bishops' conference president Cardinal Daniel DiNardo announced that the Vatican had instructed the conference to delay votes on a new code of conduct for bishops and creation of a "special commission" to review complaints made against bishops.

Cesareo said the review board recommended that the body of bishops:

The bishops established the National Review Board during their meeting in June 2002. Members are appointed by the bishops' conference president. In August, after the release of the Pennsylvania grand jury report, the board called for a lay-lead investigation into all allegations of sexual misconduct within the church as well as a strengthening the Charter for the Protection of Children and Young People.

Anne Burke, a member of the original review board, said she was "pleased" by the current board's efforts.

"However, only a national investigation by civil authorities will bring these crimes of abuse and cover-up out of secret files to be prosecuted so that justice for the victims will occur," she told NCR Nov. 13.

In his presentation to the bishops, Cesareo also referred to former apostolic nuncio Archbishop Carlo Maria Vigano, whose allegations of corruption at the highest levels of the church, especially in regards to the case of former Cardinal Theodore McCarrick, "must be addressed," he said.

"No stone must be retained unturned," Cesareo said. "Ignoring these allegations will leave a cloud of doubt over the church, as questions will linger."