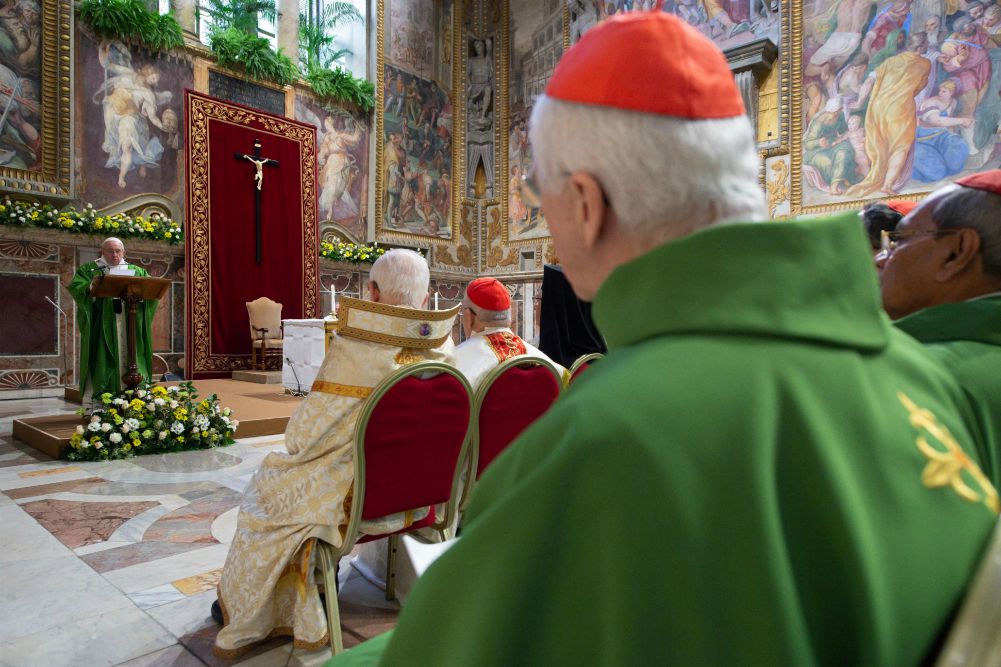 Pope Francis speaks at the conclusion of a Mass on the final day of a meeting on the protection of minors in the church at the Vatican Feb. 24. (CNS/Vatican Media)

The November 2018 bishops' meeting was Bishop W. Shawn McKnight's first as a prelate, having been named to lead the Diocese of Jefferson City, Missouri, a year earlier. Normally, a new bishop would refrain from speaking from the floor, but after the surprise announcement to delay action on sex abuse until after the Vatican global summit on the topic in February, McKnight couldn't keep silent. He approached the microphone and shared how "heartbroken" and concerned he felt for the future of the church.

Now that the Feb. 21-24 Vatican summit has concluded, McKnight — and several other newer, younger bishops — are ready to implement changes that would hold accountable bishops who cover up abuse, or are abusers themselves.

McKnight believes the summit has given the bishops the "green light" to move forward at the upcoming June meeting of the U.S. Conference of Catholic Bishops in Baltimore, where he sees "the themes of transparency and accountability coming to some sort of concrete decision."

"The validity and the success of the summit will depend on the concrete outcomes," the 50-year-old bishop told NCR, adding that he believes action is necessary. "Right now that's what people want to see."

In his own diocese, McKnight has already required religious communities ministering there to commit to releasing names of credibly accused abusers by end of 2019. He also developed a protocol in which any accusation against him would be reported to the lay review board in St. Louis, similar to Chicago Cardinal Blase Cupich's proposal to involve "metropolitan" bishops.

Although McKnight is "not sold on any one particular proposal" for consideration at the national meeting in June, it must include meaningful lay participation, which is the only way to address the root problem of clericalism, he said.

"That needs to be part and parcel of how we structure ourselves and make decisions at every level of the church," he said, referencing a shared style of leadership based in Scripture. "Maybe that's all we need is a return to an older way of how we exercise power and authority as bishops."

Also required is a "timely and complete report" on the alleged cover-up of abuse by the former Washington Cardinal Theodore McCarrick, he said.

McKnight's desire for action may reflect a sense of urgency shared by younger, newer bishops, as described by USCCB President Cardinal Daniel DiNardo in a talk just weeks before the summit. "Some of the younger bishops are more angry than some of us who have been around a little longer," DiNardo said.

"This is virtually been a part of my journey since entering the seminary 33 years ago. I've been meeting with victims since my first year of priesthood."

"There sure is urgency," said Bishop Steven Biegler, who in less than two years as head of the Diocese of Cheyenne, Wyoming, has had to address allegations of abuse against a former bishop in his diocese. When he learned that a Vatican investigation of Bishop Joseph Hart had stalled, Biegler opened an internal investigation and found credible evidence that was turned over to police, who have not yet completed their investigation, he said.

Both Biegler and McKnight have been praised by the Survivors Network of Those Abused by Priests (SNAP) for their efforts to address clergy sex abuse.

Biegler, who is 59, wouldn't use the word "anger," but admits he has "very strong energy" about the issue of sexual abuse.

"I'm new to being a bishop, but I'm sure not new to this conversation," he told NCR. "This is virtually been a part of my journey since entering the seminary 33 years ago. I've been meeting with victims since my first year of priesthood."

Bishop John Stowe of Lexington, Kentucky, became a bishop in 2015 and was named vicar general in El Paso in December 2002 after the Dallas bishops' meeting that resulted in a charter and norms for "zero tolerance" against priests who abused children.*

He said he is "frustrated," not necessarily angry, that "we've done all these things and thought we were getting farther along," he said.

Stowe, who is 52, believes most newer bishops have an expectation of transparency and accountability. "We don't necessarily have the older idea that things should be handled internally." 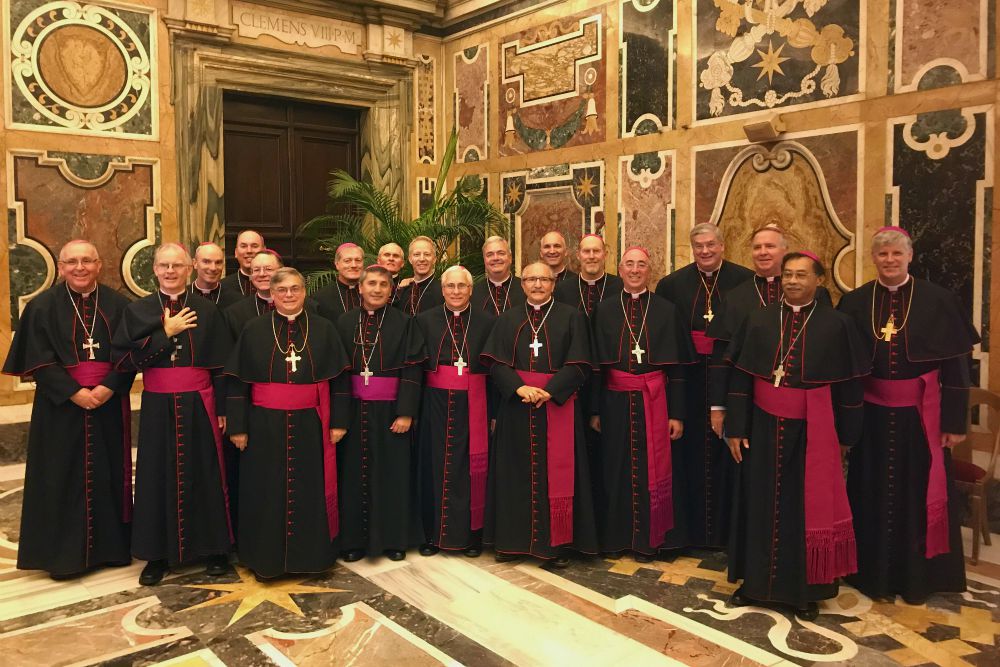 Twenty of the 21 U.S. bishops who attended the annual Vatican's "school for new bishops" pose for a photograph during a meeting with Pope Francis at the Vatican Sept. 14, 2017. (CNS/Courtesy of William Wack)

Bishop William Wack, 51, admits some younger bishops are "understandably angry, especially when we are blamed for being 'part of the problem' and are told that we should resign," he told NCR in an email interview.

But the head of the Pensacola-Tallahassee Diocese in Florida thinks he and other newer bishops can be "part of the solution."

"Instead of trying to outdo one another on being outraged and angry, we all need to work together to care for victims/survivors and to make sure that this atrocity never happens again," he said.

All four prelates said they were pleased with the first-of-its-kind meeting with the heads of the world's Catholic bishops' conferences, which gathered nearly 190 bishops as well as some lay people for the four-day summit.

McKnight called it "a necessary, cathartic moment for the global church," while Stowe termed it "substantial." Wack and Biegler were glad the meeting highlighted clergy sex abuse on a world-wide level, even if it did not result in immediate and specific plans for how to deal with bishops guilty of abuse or cover-up.

"I think Pope Francis is very consistent in saying that unless there is a conversion, structural change doesn't matter, because structures can become corrupt themselves."

"I was very pleased that the bishops and the pope sat and listened to many people before they started to deliberate on actions that might be taken," Wack said, adding that the church can now say "without hesitation" that people — especially victims — are being heard.

McKnight believes that releasing names of accused abusers allows more victims to come forward and find healing. "That needs to be the priority: What is necessary and good for victims needs to guide our response as a church at this point," he said.

Biegler also believes any "urgency" on the part of the bishops should focus on victims. That was the consensus among a small group of new bishops at a gathering sponsored by the Leadership Roundtable in Minneapolis last fall, he said.

The new bishops also expressed a desire for more time for consultation with others in their dioceses, he said. In November, the proposal was shared with the bishops less than two weeks before the meeting.

Stowe agreed that clericalism was a key emphasis at the Vatican meeting and should be the focus of U.S. bishops.

"The summit made it clear that [sexual abuse] is more about an abuse of power than about a sexual issue," Stowe said, adding he was glad that meeting avoided connecting homosexuality with sexual abuse.

Stowe said he is not impatient and agrees with the pope's desire on careful discernment. "I think Pope Francis is very consistent in saying that unless there is a conversion, structural change doesn't matter, because structures can become corrupt themselves."

But other younger bishops would like to see swift, though prudent, action.

At a "new bishops course" in Rome last year, McKnight said his colleagues "were of the same mindset" and "weighed down by this scandal and very much had a desire to take action, to be more decisive"—perhaps because they have been following Pope Francis' directive to be "closer to the people."

McKnight credits some older bishops with "doing an excellent job" and serving as role models for younger prelates.

But newer bishops likely have more time yet to serve as bishops. "So perhaps we are more motivated to address this as quickly as possible," McKnight said.

Biegler remains hopeful. "I think, providentially, that God is using this moment, for the church and the world, to bring awareness of this 'scourge of abuse,'" he said.

"What if, 20 years from now, the church becomes where you come for healing from sex abuse?"

* Editor's note: This story has been updated to clarify Stowe's appointment date.

This story appears in the Vatican Abuse Summit feature series. View the full series.
A version of this story appeared in the March 8-21, 2019 print issue under the headline: Newer bishops state urgency on abuse.