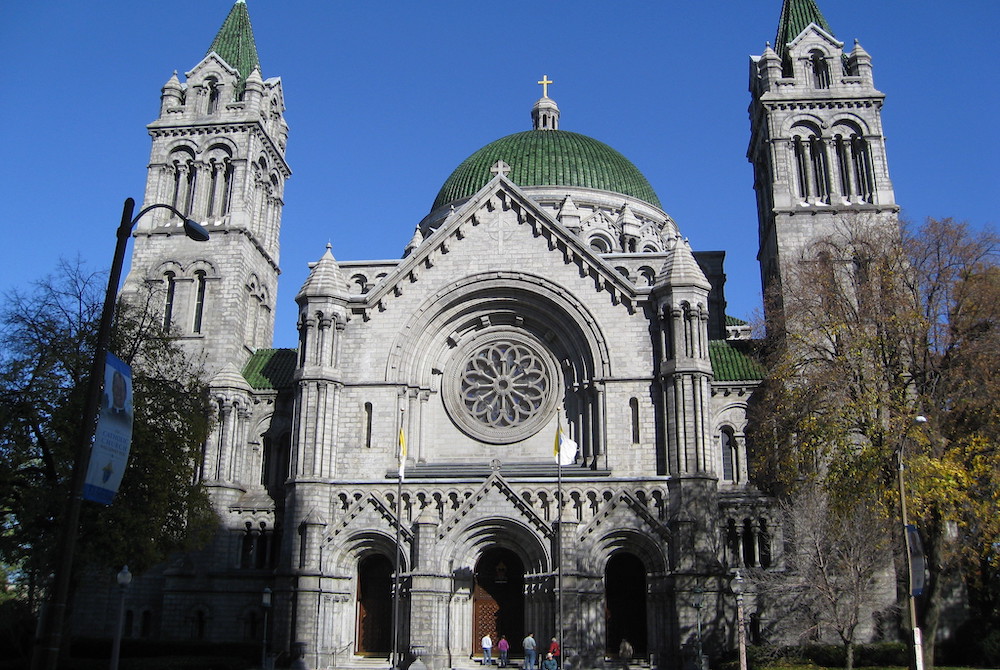 A decision by the St. Louis Archdiocese's newly installed archbishop to suspend a webinar series on immigration and place one of its organizers on leave has led to backlash from area Catholics who allege that the archdiocese's new leader has capitulated to a campaign from fringe right-wing groups and more traditional church administrators within the archdiocese aligned with their views.

On a broader level, Catholic social justice activists in the archdiocese say that the current controversy mirrors widespread tensions among the U.S. hierarchy and Catholic groups across the country who are divided over whether or not the church's opposition to abortion should serve as a primary focus from Catholics engaging in political life.

The Sept. 15 webinar, "Immigration and the 2020 Election: Education and Action for People of Faith," focused on refugees and the rights of asylum seekers. The archdiocese's Immigration Task Force helped to organize the event, which attracted an audience of an estimated 60 individuals.

Speakers at the interfaith webinar included Bishop Deon Johnson of the Episcopal Diocese of Missouri; Kenneth Schmitt, a Catholic immigration attorney; Alyssa Banford, director of civic engagement for the Jewish Council for Public Affairs; Naomi Steinberg, vice president for policy and advocacy of the Hebrew Immigrant Aid Society; and Sara John, the executive director of the St. Louis Inter-faith Committee on Latin America.

"For us, this is not about supporting any candidate over any other," Steinberg told attendees. While Schmitt voiced concern that "there's a lot riding on this election," no speaker offered an endorsement of any political candidate and organizers insist that the discussion was in line with Catholic social teaching and language used by the U.S. bishops' conference.

Days after the webinar, a St. Louis group known as Credo of the Catholic Laity circulated flyers and emails urging Catholics to contact the archbishop and "halt the campaign by the Archdiocese of St. Louis to elect pro-abortion candidate Joe Biden." Credo was founded in 1995 by men in the archdiocese concerned about its fidelity to church orthodoxy and wanted to help "save the church."

The action alert labeled the task force's "Vote Your Values" campaign as "diabolical" and also mentioned the Episcopal bishop's reference to his undocumented husband during the webinar. On Sept. 21, the website Church Militant, known for their aggressive smear campaigns against church leaders and events, said that the archdiocese was aiming to keep the issue of immigration "front and center" in the lead up to the presidential election and argued that the church is only interested in the issue of immigration as a source of revenue for church institutions. 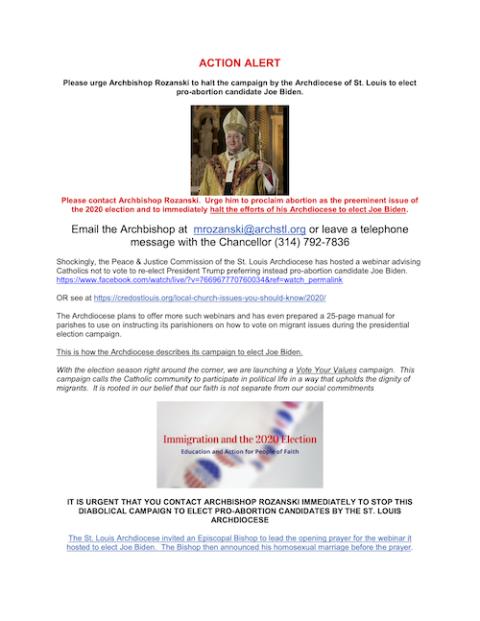 Flyer circulated by Credo of the Catholic Laity in September 2020

A Sept. 22 memo circulated to the priests, deacons and curial staff of the archdiocese by the archdiocese's office of communications and planning, however, said that some of the content was not in line with archdiocesan policy.

"Archbishop Mitchell Rozanski had no knowledge of this webinar prior to its execution, nor did anyone on the archbishop's leadership team," it continued.

The memo went on to note that Marie Kenyon, the director of the archdiocese's Peace and Justice Commission who served as administrator of the immigration task force, had been placed on administrative leave, future webinars on the topic would be cancelled, and the task force's Facebook account, which included a link to the webinar, had been shut down.

"The Catholic Church does not endorse nor criticize political candidates nor parties. Regrettably, the offending presentation violated our expectations in this regard," the memo stated.

Kenyon did not respond to NCR's request for comment, but other participants in the webinar and allied social justice leaders told NCR that Kenyon has a longstanding reputation for her work on immigration, healthcare and worker's rights, among other Catholic social teaching issues. They also believe that her work on these issues as a Catholic made her a target by groups and individuals who don't embrace the church's social teachings and have long sought to cripple her work at the archdiocese.

Pat Dougherty, who worked for nearly a decade as the senior director of advocacy for Catholic Charities of St. Louis, said he first met Kenyon when she was the head of the Catholic Legal Assistance Ministry.

She is the "strongest advocate for figuring out how to live the Gospel and to put the Gospel in practice," he told NCR. Dougherty said that Kenyon enjoys a "stellar reputation" as an attorney and is known for her work that makes the phrase "practicing Catholic come alive."

Dougherty serves on the board of Seeds of Justice, an area voluntary association that works on a range of Catholic social issues. The organization issued a Sept. 28 statement calling for the immediate reinstatement of Kenyon and arguing that the webinar backlash was the result of a campaign by "extremists who contend that only one moral issue should dominate the consciences of Catholics as they evaluate candidates in the upcoming election."

"We reject the false assumption that our Church has only one moral position and remind our fellow Catholics of Pope Francis' statements that voters must consider the Church's position on the full spectrum of moral issues at play in this election: poverty, racism, abortion, the death penalty, immigration and others," the statement continued.

Sara John, who was one of the speakers during the webinar and a member of the Immigration Task Force, said that the ensuing fallout has shown that "this isn't just about the webinar."

"Marie has built her career seeking to transform the way we do church to choose the preferential option for the poor and to lean into justice and dignity and what it means to walk that walk instead of just talk it," she told NCR. "She was targeted by groups and individuals who don't believe that those sorts of teachings represent the Catholic Church or the archdiocese."

"The webinar became the vehicle to fuel the campaign that those voices in the church have been pursuing and building on multiple fronts for a long time," John told NCR. Specifically, she said that because the webinar was about the issue of migration and those seeking asylum and not about the issue of abortion, which groups such Credo have prioritized, she believes they have been falsely maligned.

For his part, Rozanski told NCR that "all of the pro-life topics, such as abortion and immigration, are so important to us," and that the suspension of Kenyon and the task force was necessary to ensure that the archdiocese has time to properly evaluate the webinar and to ensure that it was in keeping with church teaching.

When asked about the language used by the Church Militant that described immigration as a "cash cow" for the church, he rejected that characterization, saying that "the church has been formed by immigrants for centuries."

"Immigration has been a concern since we arrived on these shores as Catholics," he said. "When we look at the moral teachings of the church, they are such a treasure. To ignore parts of that treasure is not to allow the beauty to shine forth."

Rozanski said that he hopes the review process of the webinar and the task force will be complete in two weeks. Looking ahead, he hopes Catholics will be able to overcome internal divisions in order to work together for the good of both the church and the country.

"November 4, the day after Election Day, will arrive," he said. "As Catholics, we have to come together to work for the common good that continues the work of the kingdom." 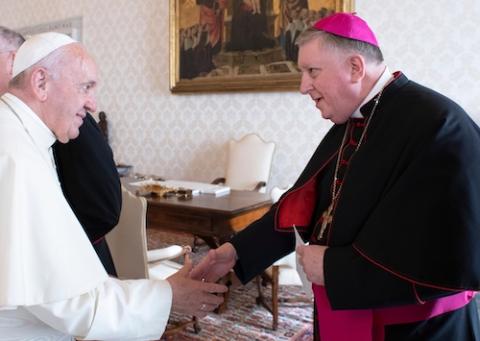 Pope Francis greets Bishop Mitchell Rozanski during a meeting with U.S. bishops from the New England States at the Vatican Nov. 7, 2019. (CNS/Vatican Media)

Catholics such as Sara John and others in the archdiocese told NCR the arrival of Rozanski to St. Louis in August was initially met with enthusiasm and that they welcomed a new leader who has said that he hopes to model Francis' emphasis on dialogue and mercy.

John said that she now fears that he may be getting advice from the wrong people and those in the archdiocese who are more ideologically aligned with figures such as Cardinal Raymond Burke, who serves on the advisory board of Credo and who led the archdiocese from 2004 to 2008. Burke has emerged as a chief critic of Francis, and his conservative imprint on the archdiocese and the U.S. hierarchy remains significant through his close collaboration with leading traditionalist Catholic organizations and media operations.

"You can't know what you didn't know," John said of Rozanski and his understanding of the dynamics within the archdiocese. "But now he knows."

"For many of us, this is our life's work and this is why we cling to the church and that very core is being shut down and silenced," she told NCR. "I will just pray that he can hear those voices and be the shepherd that so many of us are hoping and praying that he will be."

On Sept. 24, members of the immigration task force met with the Auxiliary Bishop Mark Rivituso. John said that she offered to sit with him and go line by line through the webinar so he could offer corrections and point out where the event transgressed Catholic teaching on immigration or archdiocesan policy.

She said that Rivitus declined but promised the group that he would take their concerns to heart and there would be a future opportunity for their voices to be heard.

"What justice looks like now is reconciliation," she said — adding that reconciliation must take place with migrants and refugees, those working on these issues within the archdiocese and partner organizations of other faiths whom she says have been hurt by recent events. "I just pray that the archbishop and the people he chooses to surround himself with can lead us in that direction."

Editor's note: On Oct. 6, NCR executive editor Heidi Schlumpf will participate in a panel discussion on "Voting: What's A Catholic To Do," organized by Seeds of Justice. The St. Louis Archdiocese's Peace and Justice Commission was previously a co-sponsor of this event.

This story appears in the Election 2020 feature series. View the full series.
A version of this story appeared in the Oct 16-29, 2020 print issue under the headline: Backlash in St. Louis Archdiocese after social justice leader suspended.