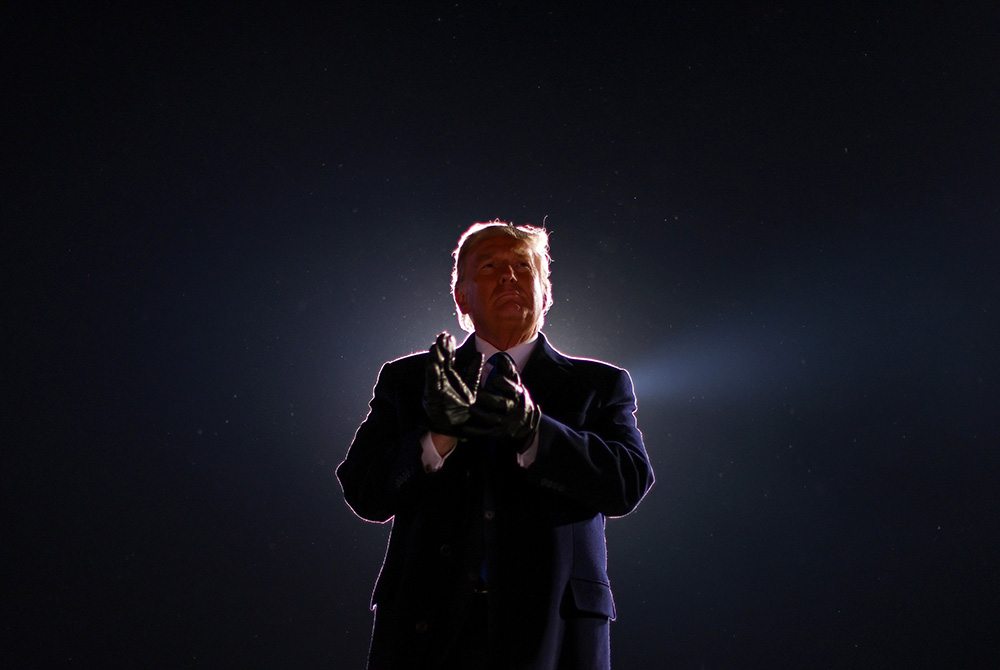 President Donald Trump is seen at the end of his campaign rally at Eppley Airfield Oct. 27 in Omaha, Nebraska. (CNS/Jonathan Ernst, Reuters)

But one answer I know without flaw: I had a mother who assiduously insisted that there was something to be learned in everything. I'd pour out my losses or celebrate my gains and my mother — somewhere along the way — managed to make her ever-living point: "And what did you learn from that, Joan?" she asked. Over and over again. Always.

It's a tiring exercise if you're a child. It's an everlasting path to wisdom when you get to be an adult who knows without doubt that just because you want something — a particular position, a given candidate, encouragement for a plan that failed — there is, lurking within it, a lesson.

And, note well, it will be a big enough lesson to carry you beyond where you are to where you must go if you are ever to come to wholeness.

For that unseen lesson you must be grateful.

That's where I am now. I've learned a lot from President Donald Trump in none of the ways I wanted to.

First, I want to thank Trump for exposing to us how dangerously fragile a democracy really is. What I had been taught was that our democracy — American democracy — unlike all those pseudo-systems like Argentina or Turkey or Germany in 1939, was impregnable.

People like Trump, narcissists and power-patriarchs, can simply shape our political world, not around our values, but around themselves and their personal goals, their ill-gotten gains, their blatant disregard for any values we thought had been unalterably baked into the system long before they came. On the contrary, I have begun to think that politics is a kind of while-we-slept game.

Second, Trump has shown us how baseless democracy is if it is not understood and protected by all of those who take an oath to preserve it. A presidential election is not meant to give any single person power alone. It is meant to surround a president with representatives, senators, cabinet officers and officials of conscience and character, who are first and foremost responsible for the preservation of the Constitution. They, too, are also deputized to make themselves as responsible for defending the ideals and vision of the Constitution as is the president. And so those values, that document, must be protected — even from the president if necessary.

We have seen so little of that these last four years.

Third, Trump has shown us that the makings of a coup run through every form of government, including democracy. Thanks to him, we must never be so blasé again about the possibility of the overthrow of democracy as we know it: As in, "but we're a democracy so that can't happen to us." On the contrary.

Fourth, in the end, I learned that even "party" meant little to Trump. That seemed to be a refreshing thought until I realized, too, that though party did not move him, cronyism did, "loyalty" did, personal power did — in fact, personal power was his fatal addiction.

But unfortunately, he taught me too that the likelihood of members of Congress to yield to intimidation for the sake of saving their own seats and putting petty power above the welfare of the country is itself a political virus. I admit I was shocked.

I remembered the Republicans who heard every word of testimony against Richard Nixon and then themselves went as a delegation to tell Nixon it was time for him to go.

We, on the other hand, saw three — three — brave Republican senators put commitment to the country above loyalty to the Trumpism that threatened them. So, how can we trust them again?

Fifth, I am grateful to past-President Trump for demonstrating how easy it is for a president to simply pull the boat away from the shore by himself. Thanks to Trump, we learned the hard way that government by executive orders — presidential determinations neither vetted nor voted on by Congress — is not a democracy. It is at best a monarchy in disguise, a monarchy in waiting.

The executive order is a legislative tool that has been growing in popularity. In the modern era, Franklin Delano Roosevelt, in the face of a recalcitrant Congress, launched his New Deal. Worse, he also incarcerated Japanese Americans with it. Before that era, western states had been created by it.

Yet, for all intents and purposes, that approach to national legislation sank back into the shadows to be used for little more than minor issues in a world of more important debates or national emergencies.

In our time, however, those doors have been blown open again by the plague of polarization. Presidents have little power in the face of political rejection to get anything done except by taking things into their own hands. But the process deserves watching. It's Trump's executive orders on border protection, immigration and immigrants, ecological reversals, federal land usage, infrastructure and the Affordable Care Act that are clear indicators of how easy it has gotten to legislate outside of legislation.

Clearly, it is a time for serious vigilance if democracy is not to slip away, at the end of a single pen, unseen.

Sixth, I am also grateful to Trump for taking one truism out of the American vocabulary. As in, "No, I don't vote. My single vote won't change anything."

In fact, your one vote — or its lack — is still changing things.

Finally, I am grateful for the gift of reality Trump has given us as a people. He has forced us to face the difference between bullying and leading. Leaders who bully are dangerous. Full-grown politicians, whose own motives are so gross, so self-centered, that they bend to the local bully for the sake of a longer term, are selling this country out for Scripture's famous "thirty pieces of silver."

The fragility of our system, the complicity of Congressional representatives and senators to curry favor with the executive branch of government in order to secure their own place in it, the American-style monarchy in the unrestrained use of executive orders, and the common lack of citizen commitment to the privilege of voting — reflected in the glee of a 40-something mother who voted for the first time in this election — has brought this country to the brink.

May God help us all, citizens and political figures at every level, to figure out that the lesson that will make or break our future lies in realizing that politics is a seriously righteous act — a socially ethical responsibility, a deeply spiritual one. The great political question in this country now is a moral one: Are we devoted to such public morality? Are we up to it?

From where I stand, through it all I learned that the complacency of "it can't happen here" has died here these past four years. Just as it did in Munich in 1939.

This story appears in the Election 2020 feature series. View the full series.
A version of this story appeared in the Dec 11-24, 2020 print issue under the headline: Thanks, President Trump — I learned a lot from you.