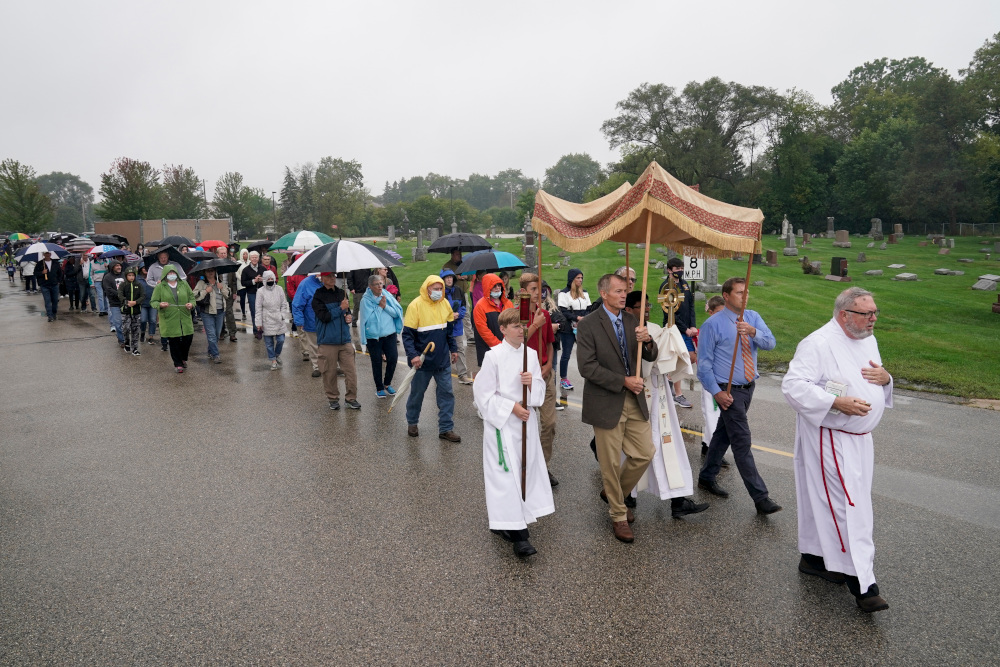 Churchgoers participate in a procession at the Holy Apostles Church in Milwaukee, Saturday, Sept. 12, 2020. For decades, Roman Catholic voters have been a pivotal swing vote in U.S. presidential elections, with a majority backing the winner — whether Republican or Democrat — nearly every time. (AP/Morry Gash)

For decades, Roman Catholic voters have been a pivotal swing vote in U.S. presidential elections, with a majority backing the winner — whether Republican or Democrat — nearly every time.

How they vote in the battleground states this year could well decide the outcome, and the rival campaigns are targeting them with fervent appeals to vote based on their faith.

Advocates for President Donald Trump say a faithful Catholic cannot vote for Democratic nominee Joe Biden because of his support for abortion rights. Critics of Trump say he is too divisive and callous to merit the vote of any faithful Catholic. The death on Sept. 18 of Supreme Court Justice Ruth Bader Ginsburg brings into clearer focus the chasm between the two sides.

The campaigns are competing to win over people like Jeannie French of Pittsburgh, in battleground Pennsylvania, who has struggled with her decision. She's a member of Democrats for Life, loath to vote for Biden because of his stance on abortion, but dismayed by many Republicans' positions on social issues.

Just a week ago, French, a real estate consultant who does volunteer work at her church, said she hadn't made up her mind, and was considering voting for a third-party candidate. But now, with the Supreme Court vacancy, she's leaning toward Trump as he pledges to nominate a conservative woman.

"A vote for Trump will mean that I need to work even harder for fair wages, environmental issues, penal reform, immigrant care and other social concerns, but it also means that we get the opportunity to get things right on abortion," French said via email. "For this Catholic, it might just be the right call."

Biden, a practicing Catholic who carries a Rosary, would be just the second Catholic president after John F. Kennedy. Trump, who identifies as Presbyterian, is an infrequent churchgoer.

On Wednesday, Trump is scheduled to make remarks at the annual National Catholic Prayer Breakfast, which will be a virtual event this year. The event's chairman, Mark Randall, praised Trump and his administration for seeking to curtail abortion and protect religious freedom.

In several battleground states including Pennsylvania, Wisconsin and Florida, more than 20% of adults are Catholic. Trump won all three in 2016, but recent polls show Biden with modest leads in each, fueling intense competition for Catholics' support.

Several other groups are wooing these voters, including Catholics for Trump, whose advisory board includes former House Speaker Newt Gingrich, and Catholics for Biden, launched Sept. 3 via an online event.

Among those addressing the launch was Sister Simone Campbell, who heads the Network Lobby for Catholic Social Justice. This year the network will again mount a nationwide Nuns on the Bus campaign, including online events targeting battleground states.

"Catholics cannot be true to their faith and vote for Donald Trump in November," said Campbell. "President Trump is doing everything in his power to divide us, while our economy and health care systems collapse under the weight of the COVID-19 pandemic." 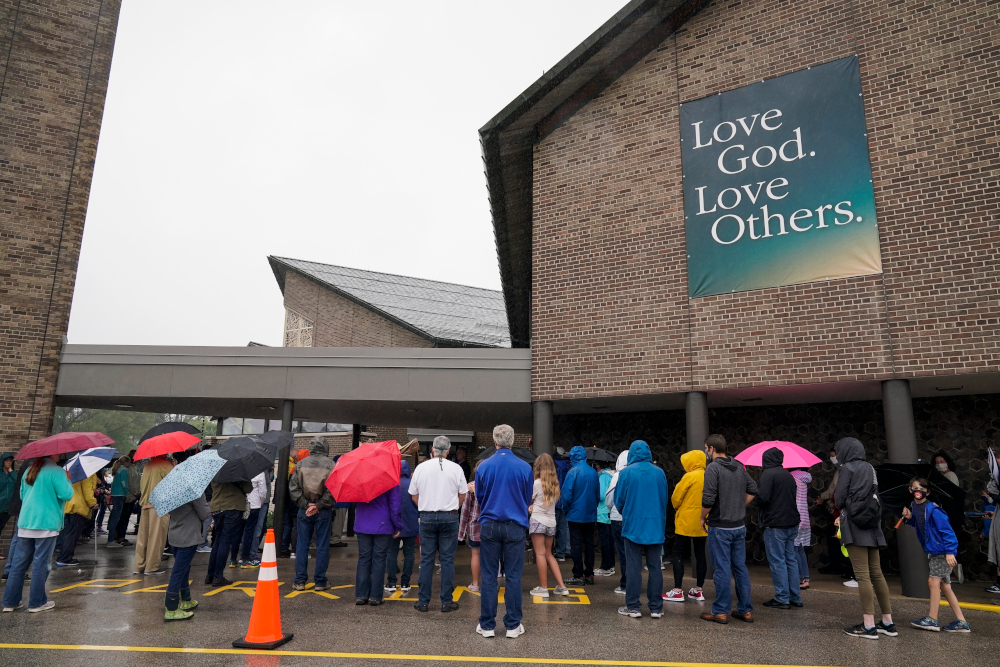 Churchgoers participate in a procession at the Holy Apostles Church in Milwaukee, Saturday, Sept. 12, 2020. How Catholics vote in the battleground states this year could well decide the outcome, and the rival campaigns are targeting them with fervent appeals to vote based on their faith. (AP/Morry Gash)

Comparable strategies and tough talk are coming from the other side as well. Catholics for Trump is organizing meetups in various states, including one in Florida featuring the Rev. Frank Pavone, a Catholic priest and anti-abortion activist who calls the Democrats "the party of death."

Catholics for Trump hoped to launch its 2020 campaign at a rally in Wisconsin, but it was postponed due to the coronavirus outbreak. Milwaukee Archbishop Jerome Listecki sought to clarify that the church heirarchy was not a sponsor.

"The Catholic Church and the Archdiocese of Milwaukee are not endorsing the rally," Listecki said. "The mission of the church is religious, not political."

This month another Wisconsin bishop spoke out after the Rev. James Altman, a parish priest in La Crosse, declared during a diatribe on YouTube, "You cannot be Catholic and be a Democrat."

Among Wisconsin Catholics praising Altman was Kevin O'Brien, co-founder of a movement called Men of Christ.

"When you look at Catholic principles, what Altman said is true," said O'Brien, a former pro football player who lives in Pewaukee.

As for the Supreme Court vacancy, O'Brien said many Catholics are praying for Trump to appoint a justice who will "secure laws that are just for all people, especially the unborn."

Barbara Pfarr, a Milwaukee-based nun active in the Nuns on the Bus campaign, has posted criticisms of Trump on Facebook yet bemoans the political polarization that's intensifying this year.

"I have tried to be better about being cynical, about demonizing the other side," she said. "I'm not very good at it."

Franklin doesn't believe abortion is the dominant issue for many Catholics, given that a majority in his polling support abortion rights to some degree.

But in Florida, devout Catholic John Doolittle, a former Navy SEAL who works for a fitness and rehabilitation firm, said abortion is a paramount issue for him.

"My faith is a very large part of my political decision-making ... and abortion is a big part of that," the St. Petersburg resident said. "I cannot support someone who's OK with it."

One of Biden's high-profile Catholic supporters in Florida is Felice Gorordo, a Miami-based entrepreneur who co-hosted the national kickoff of Catholics for Biden on Sept. 3.

He argued that the fight over the Supreme Court vacancy wouldn't change the dynamics of the campaign.

"In the end, I don't think this will distract voters from all the ways Trump has destroyed the economy, failed on COVID, cost needless death and illness and acted contrary to Catholic values across the board, repeatedly," Gorordo said.

In Pennsylvania, where Biden lived until he was 10, Republican State Rep. Frank Ryan believes Trump has the edge due to Catholics embracing his positions on abortion and school choice. He said priests in his region around Harrisburg are openly suggesting that politicians who support abortion rights should be denied Communion.

However, U.S. Sen. Bob Casey, a rare prominent Democrat who calls himself "pro-life," said he and many other Catholics in Pennsylvania find greater moral value in Biden's positions on other issues, including racial justice, immigration, health care and support for low-income families.

Such voters, he said, "have a pretty broad view of what constitutes a good Catholic."

Casey said the next high court justice will likely be the deciding vote on whether the Affordable Care Act is overturned, which would jeopardize many people's protections for pre-existing conditions.

"This will be a voting issue for all Americans," Casey said, "including Americans of faith."