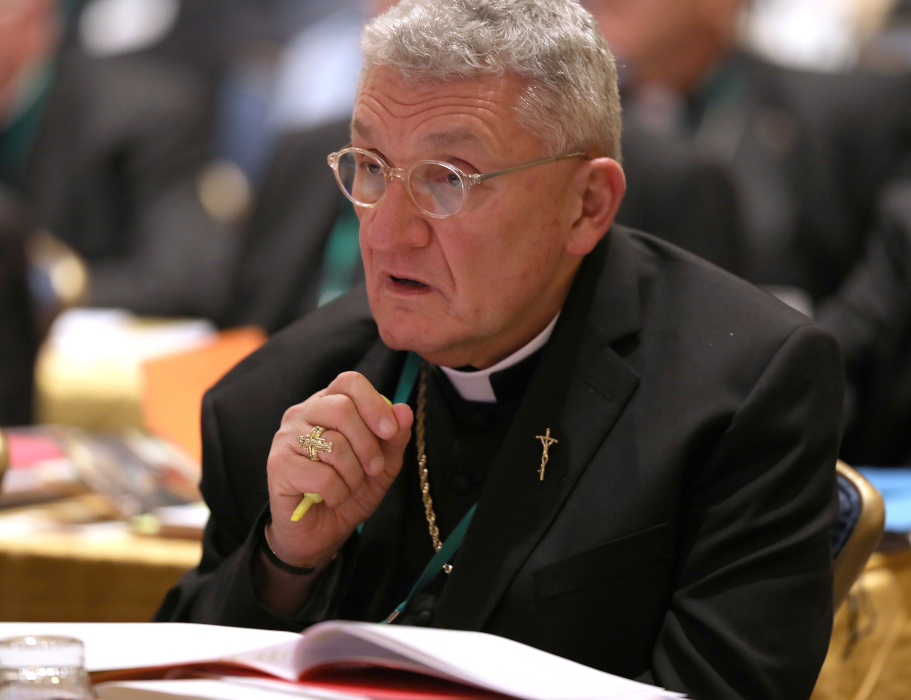 Bishop David A. Zubik of Pittsburgh is seen in this 2018 file photo at the fall general assembly of the U.S. Conference of Catholic Bishops in Baltimore. (CNS/Bob Roller)

Bishop David A. Zubik of Pittsburgh told Catholics in the diocese in a preelection message that he cannot tell them whom to vote for on Election Day.

In a Sept. 22 letter to the diocese, Zubik said the church must focus on "addressing issues grounded on our faith and tradition" while calling the election "perhaps the most contentious in the course of our lifetime."

"I must take this opportunity to speak to our voting rights as more than simply pulling a lever, pressing a button or sending a ballot in the mail," he wrote. "Our vote is one that must be viewed as a moral decision."

Describing "life issues" as major concerns facing the country, Zubik said the most serious threats to human life are abortion, racism, the environmental crisis, human trafficking, unemployment, appropriate medical coverage, the death penalty, religious freedom, the plight of immigrants and poverty. These are among those deserving careful consideration by voters, he said.

He turned to abortion and infanticide, identifying them as of "preeminent priority" as described by the U.S. Conference of Catholic Bishops' in an introductory letter to their quadrennial document "Forming Consciences for Faithful Citizenship: A Call to Political Responsibility."

"Moreover, some might argue for or against the matter at hand as being a 'single issue.' Both are correct. Respect for life IS the issue," Zubik emphasized. "But it is a continuum of other issues, many issues, that flow from the beginning of life at the moment of conception. Again, every other iteration of life flows from the preeminent moment of conception."

He encouraged people to pray on how to best to support the common good and life and dignity of all people; seek guidance through prayerful reading of Jesus in the New Testament; and honestly inform themselves about the church's moral teaching as they consider their vote.

"To follow one's conscience does not mean following one's feelings," he continued. "It means praying over, studying about and looking at the big picture of 'life issues' beginning with conception.

"When we vote, we must vote with the most vulnerable in mind, from children — born and unborn — to the elderly, racial minorities, those with disabilities, immigrants, the unemployed, and so many others who have been marginalized."

He also said he had sent a separate letter to priests and deacons in the diocese, as he had during previous presidential elections, reminding them "not to speak for or against any candidate, particularly from the pulpit."

Zubik said that letter reminded the clergy their role is to "carry out the teaching mission of the church, which involves educating people about issues relating to church teaching and the importance of voting with an informed and well-formed conscience."

The bishop also cautioned voters in the diocese that not all materials they will receive from various organizations "claiming to be Catholic" during the preelection season reflect the "fullness of Catholic teaching."

"Some of these may distort and misstate Catholic teaching or advocate for the election of one candidate over another," he said.

The bishop also referred the faithful of the diocese to election resources on the diocesan website. It includes a video from Zubik, guidelines for political activity at parishes and schools, parish resources on voting and civility and a referral to USCCB resources related to its "Faithful Citizenship" document.