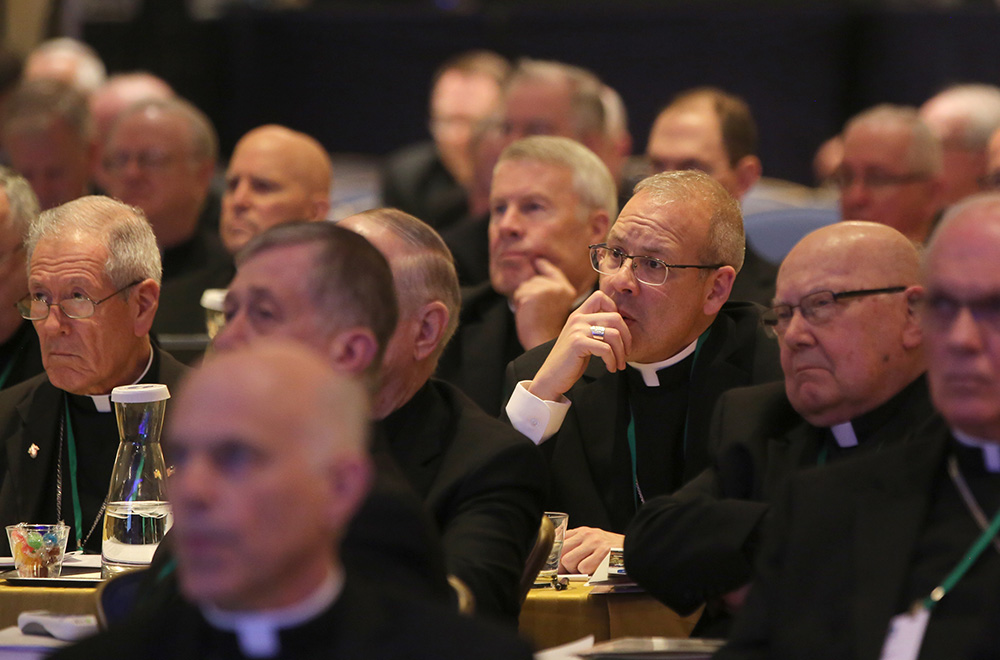 Bishops listen to a speaker Nov. 14 at the fall general assembly of the U.S. Conference of Catholic Bishops in Baltimore. (CNS/Bob Roller)

After months of anticipation, Catholics hoping the U.S. bishops' annual meeting would yield actionable steps on the sexual abuse crisis will have to settle, for now, for "a springboard."

The three-day public portion of the fall general assembly concluded Wednesday with no final decisions or concrete steps, in part due to a Vatican request to delay any votes on proposals until after a February meeting in Rome among Pope Francis and the heads of bishops' conferences from around the globe.

The request, delivered as the bishops began their proceedings Monday, came as a disappointment to many bishops who arrived eager to demonstrate their seriousness on the abuse issue, not to speak of the wider Catholic community and public watching to see if the church leaders would deliver on promises to address the matter with more than words.

In his concluding remarks, Cardinal Daniel DiNardo, president of the U.S. Conference of Catholic Bishops, shared in the sentiment, though left room for some hope.

"Brothers, I opened the meeting expressing some disappointment. I end it with hope," he said. "My hope is first of all grounded in Christ, who desires that the church be purified and that our efforts bear fruit."

He added the conversations and counsel, from experts on child protection and survivors of clergy sexual abuse themselves, gave him "direction and consensus" that the church could deliver on pledges to establish greater accountability for bishops, both in cases of misconduct and mishandling abuse allegations, and to uncover how ex-Cardinal Theodore McCarrick, accused of sexual misconduct with seminarians and adult priests, rose through the clerical ranks.

"I will take it as a springboard for action," DiNardo said.

"I am sure that, under the leadership of Pope Francis, the conversation that the global church will have in February will help us eradicate the evil of sexual abuse from our church."
—Cardinal Daniel DiNardo

The conversations among bishops, while cordial, did not at times convey the consensus DiNardo perceived. Rather, the dialogue reflected a need for more ironing out and pruning or even defining of the proposals the bishops brought with them. It was unclear whether the bishops, if left free to vote, would have reached the agreement necessary to turn proposals into policies.

One question DiNardo attempted to address with his remarks was the fidelity the American prelates held with Francis. After recapping two earlier expressions this summer of "fraternal affection for our Holy Father," he again reiterated that feeling on behalf of the full body.

"Now together with you today, gathered in Baltimore in Plenary Assembly, we the members of the United States Conference of Catholic Bishops pledge to His Holiness our loyalty and devotion in these difficult days," the bishops' conference president said. "I am sure that, under the leadership of Pope Francis, the conversation that the global church will have in February will help us eradicate the evil of sexual abuse from our church. It will make our local efforts more global and the global perspective will help us here."

On the one vote taken related to addressing the abuse crisis, the bishops overwhelmingly rejected (137 no to 83 yes) a largely symbolic motion, proposed by Bishop Earl Boyea of Lansing, Michigan, that would have "encouraged" the Holy See to release all documentation possible under canon and civil law related to allegations of misconduct against McCarrick — and to do so "soon."

Several bishops in favor of the measure expressed that people in their dioceses had made transparency into the McCarrick matter a major demand. And while agreeing with the need for such clarity about the prelate's history, those opposed to the motion saw it as doing little, and instead duplicating a pledge already made by the Vatican.

Newark Cardinal Joseph Tobin read from an Oct. 6 communique from the Holy See that said in part "the Holy See will in due course make known the conclusions of the matter regarding Archbishop McCarrick," which he took as the Vatican "has already made its intentions known to reveal the documentation" regarding the investigations into the disgraced former cardinal.

Added Chicago Cardinal Blase Cupich, "The successor of Peter has said he's going to be truthful about this, and it seems to me we need to take his word at it."

The bishops arrived in Baltimore with three action items set to reach a vote: a set of standard of accountability for bishops; a proposed, majority lay commission to address misconduct allegations against bishops; and a protocol of restrictions on bishops who resigned or were removed due to abuse allegations or "grave negligence in office."

With the Vatican request to press pause, the bishops still moved forward with debate and discussion of the measures.

Offering an amendment to the proposed standards of accountability for bishops, Bishop Steven Biegler of Cheyenne, Wyoming, outlined several "values for episcopal conduct." He wrote in part:

As the Church seeks to be reformed, we need to address the root causes of the episcopal abuse of power in the sexual abuse crisis. A major factor was clericalism. Some bishops fostered a "toxic brotherhood" which caused them to overlook questionable behavior, ignore rumors of problems, believe clerical denials and seek to preserve a cleric's ability to minister. At times, they acted to protect the reputation of the Church or clergy, while they shunned the victims/survivors of sexual abuse and their families. Bishops frequently ignored the voices of the laity who spoke up about sexual abuse and the mishandling of allegations; instead, they acted within institutional isolation.

Expanding on the amendment — which while welcomed, was deemed ill-fitting for that document and not accepted by the Committee on Clergy, Consecrated Life and Vocations — Biegler described his experience investigating former Cheyenne Bishop Joseph Hart. He said that in conducting the investigation, he heard from victims who expressed feeling unfavorable reception from law enforcement, while he himself encountered critical views from some in the legal community, long-term parishioners and fellow bishops. He described what he experienced as "a favoritism toward the person that's in power … which then shuns the victims."

"I do feel that we aren't acting as guardians of the least," Biegler said. "I feel that we've had no tenderness in our heart to hear the cries that have come our way for mercy. I feel that we've failed to work with co-responsibility for the laypeople," He added the idea of appointing a special, largely lay commission to review accusations against bishops would in effect be "totally relinquishing" bishops from their responsibility of the leadership assigned to them.

The conversation Wednesday continued criticisms of the proposed commission, which would establish a nonprofit organization outside the conference with nine members — six* laypeople, two bishops and one priest — who would evaluate accusations against bishops before sending them to the Vatican's ambassador to the U.S.

One idea, which drew unlikely coalescence between Cupich and Philadelphia Archbishop Charles Chaput, would place more authority with the metropolitan archbishop to review such allegations. In his own amendment, Cupich described in detail a process in which any accusation against a bishop of sexual abuse or negligence in protecting children and vulnerable adults would be reported to local authorities and the metropolitan, and then passed to the Vatican through the apostolic nuncio.

Others raised questions about that alternative, noting that McCarrick, as archbishop of Washington, D.C., was a metropolitan himself, and wondered whether Catholics would view such a process as truly independent.

Much of the discussion centered on McCarrick, with bishops speaking to "rightful outrage" from people in the pews and "well-justified wrath and suspicion of the faithful" over how his alleged sexual misconduct with seminarians and young priests went unreported for so long. The 88-year-old prelate has denied the allegations, and a canonical investigation is ongoing.

Noting the U.S. Senate has on rare occasions voted to censure a member for extraordinary violations of its standards, Bishop Liam Cary of Baker, Oregon, asked, "Should the conference of American bishops do the same with Archbishop McCarrick?"

While the pope removed McCarrick from the College of Cardinals and other institutions removed his name from buildings and rescinded honorary degrees, "We have taken no official steps to distance ourselves from the shameful behavior of one of our own. What are people to make of our silence?"

"He is not welcome," said Olson, the Fort Worth bishop. "We should say that for his sake, and out of respect for those whom he has harmed."

While bishops closed the meeting absent conference-wide plans, several found affirmation in that many of the ideas floated — from reviewing priests' files, to releasing the names of those credibly accused — were ones they could enact on their own in their dioceses.

Others ideas, such as a uniform definition for what constitutes a credible allegation and a commissioned study into the sexual abuse and cover-up by bishops, were deemed needing more time for review by the task force appointed to further consider options.

"We leave this place committed to taking the strongest possible actions at the earliest possible moment," DiNardo said, and "in communion with the Universal Church."

"There is more to be done, but what we have done is a sign of hope.”

*This story has been updated to correct the number of laypeople to be included in the nonprofit organization outside the bishops' conference.

This story appears in the USCCB Fall Assembly 2018 feature series. View the full series.
A version of this story appeared in the Nov 30-Dec 13, 2018 print issue under the headline: Bishops, anticipating action on abuse, settle for a metaphor.