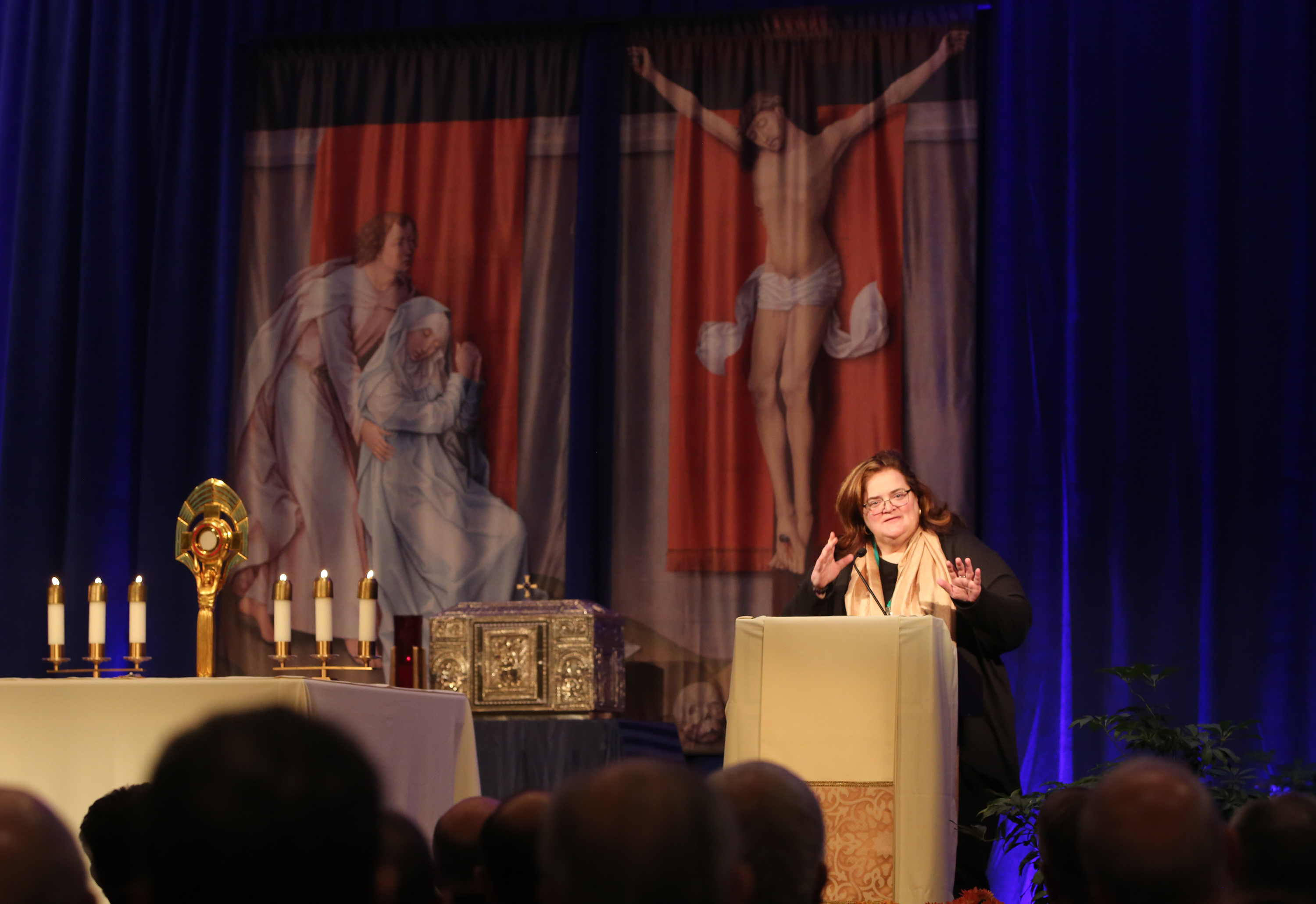 Teresa Pitt Green, an abuse survivor, speaks to bishops in the chapel during a day of prayer Nov. 12 at the fall general assembly of the U.S. Conference of Catholic Bishops in Baltimore. (CNS/Bob Roller)

Before traveling to Rome for a major Vatican summit on the clerical sex abuse crisis and child protection, each participating bishop should meet with survivors of abuse, said the committee organizing the meeting.

"The first step must be acknowledging the truth of what has happened. For this reason, we urge each episcopal conference president to reach out and visit with victim survivors of clergy sex abuse in your respective countries prior to the meeting in Rome to learn first-hand the suffering that they have endured," said the organizing committee's letter, released by the Vatican Dec. 18.

The pope had announced in September that he was calling the presidents of the world's bishops conferences, the heads of the Eastern Catholic churches and representatives of the leadership groups of men and women religious orders to the Vatican Feb. 21-25 to address the crisis.

Greg Burke, director of the Vatican press office, said having participants meet first with survivors "is a concrete way of putting victims first and acknowledging the horror of what happened."

"The meeting on the protection of minors," he said, "will focus on three main themes: responsibility, accountability and transparency."

In November, the Vatican announced the membership of the organizing committee: Cardinals Blase Cupich of Chicago and Oswald Gracias of Mumbai, India; Archbishop Charles Scicluna of Malta, adjunct secretary of the Congregation for the Doctrine of the Faith; and Jesuit Fr. Hans Zollner, president of the Centre for the Protection of Minors at the Pontifical Gregorian University and a member of the Pontifical Commission for the Protection of Minors.

Writing to meeting participants, they quoted Pope Francis' letter to Catholics in August, which said, "If, in the past, the [church's] response was one of omission, today we want solidarity, in the deepest and most challenging sense, to become our way of forging present and future history."

Without "a comprehensive and communal response" to the abuse crisis, the committee said, "not only will we fail to bring healing to victim survivors, but the very credibility of the church to carry on the mission of Christ will be in jeopardy throughout the world."

The members included a questionnaire for participants, but it was not made public. The questionnaire, the committee said, was designed as "a tool for all the participants of the meeting in February to express their opinions constructively and critically as we move forward, to identify where help is needed to bring about reforms now and in the future, and to help us get a full picture of the situation in the church."

Francis, they said, "is convinced that through collegial cooperation, the challenges facing the church can be met. But each of us needs to own this challenge, coming together in solidarity, humility and penitence to repair the damage done, sharing a common commitment to transparency and holding everyone in the church accountable."