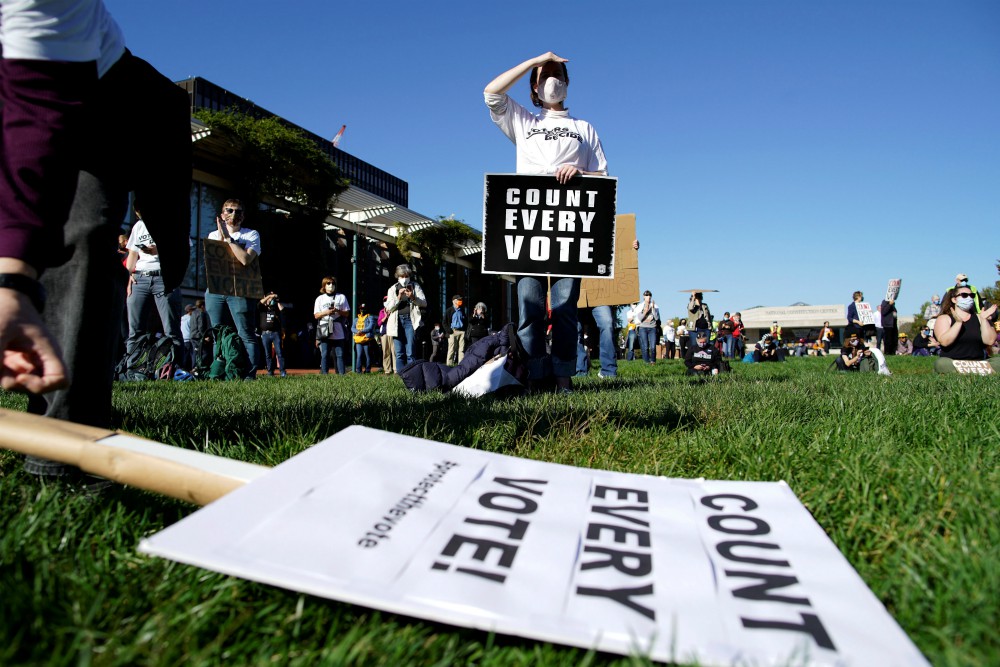 A woman holds a sign during a rally demanding a fair count of the votes of the presidential election in Philadelphia Nov. 4. (CNS/Reuters/Eduardo Munoz)

In the hazy 48 hours since polls closed, most bishops have remained quiet, presumably waiting until all ballots are counted to weigh in on the next president of the United States. Yet for those who have spoken out, the need for faith in democratic norms, greater protection of marginalized persons, and a desire for national healing have emerged as key themes.

"I doubt that any of us expected to wake up on November 4th ready to hold hands and sing Kumbaya with the neighbors whose yard signs offended us for the last several weeks," wrote Bishop John Stowe of Lexington, Kentucky, and president of Pax Christi on Wednesday. "But I for one was hoping for a resounding vote for participatory democracy as we know it, for a measured and scientific approach to the current global pandemic, for humanitarian and life-affirming policies at our southern border, for affirmation of human rights and dignity, for confirming the importance of three separate but equal branches of government in our constitution, for civility and decency, for facts and the truth, for progress in dismantling systematic racism ... for normalcy.

"Instead, even with final results hours, days or weeks away, I feel like I woke up on Christmas morning with coal in my stocking. Not only a letdown, but an occasion to ask, 'what did I do wrong?' or 'what did I get wrong?,' " he continued.

Looking ahead, he wrote: "We pray for a just and peaceful conclusion to these elections and for all who will be affected by the outcome. We study the story of our democracy, the teachings of our faith, and how they work together to promote the dignity of the human person and progress for the common good. And we will work to make that vision become real, and to be instruments of healing for all who have been excluded and do not have the luxury of waiting."

(Stowe also offered a meditation for NCR earlier in the week reflecting on "Where do we go from here?" after the election.)

On Thursday morning, Cardinal Sean O'Malley of Boston wrote in a statement that Americans "should take pride in the success of the electoral process."

He hailed the historical voter turnout, saying, "That encouraging sign has opened the way to begin a process of participation among all citizens however they voted. As Catholics we are committed to the common good, social justice and the Gospel of Life."

Although he did not mention any candidates by name, the cardinal said, "The President and those who will serve with him have both the opportunity and the challenge of rebuilding civic trust, of providing a sense of hope in a time of social crisis, and of calling us all to share our best talents and energies in a common task."

Bishop Paul Bradley of Kalamazoo, Michigan, also weighed in through a series of messages on social media urging unity and nonviolence.

"Yesterday we voted according to our conscience. No matter the results, our responsibility as Catholics remains the same: to follow Jesus; to love one another; to reject anger, violence, and contempt for others. When we live our Faith with conviction, our country remains strong," he wrote on Twitter.

"Catholics may be found in different political affiliations, but far more important now is our commitment to transform the culture with the values found in the social teachings of the Church," wrote Bishop Felipe Estévez of St. Augustine, Florida, on Thursday.

Meanwhile, border Bishop Daniel Flores of Brownsville, Texas, used the occasion to remind people not to think of Latino Catholics as a monolithic group, inviting Catholics and other Americans to use the election results as an opportunity to learn from and understand this vital demographic that represents the future of the U.S Catholic church.

"I am frankly appalled at the cultural ignorance on display about the varieties of communities of Latin American descent in the United States, all because exit polls suggest they don't fit someone's punditry, or neatly pre-fabricated narratives," he wrote on Twitter. "There exists in this country a pallid intellectual culture that opts for easy nominalisms: it aggregates characteristics to communities it has never taken the time to get to know. It invents categories and then assigns places for everyone."

"It never visits their homes, eats their foods, enjoys their music, talks to their old folks, or listens to their young people," he continued.

"In the Church there is no excuse. Pastors, lay leaders, get to know the many local communities within your community," he urged. "Try to understand them, receive their poverty so your richness might become poor. Learn from them before you presume to teach, or worse, comment about them."