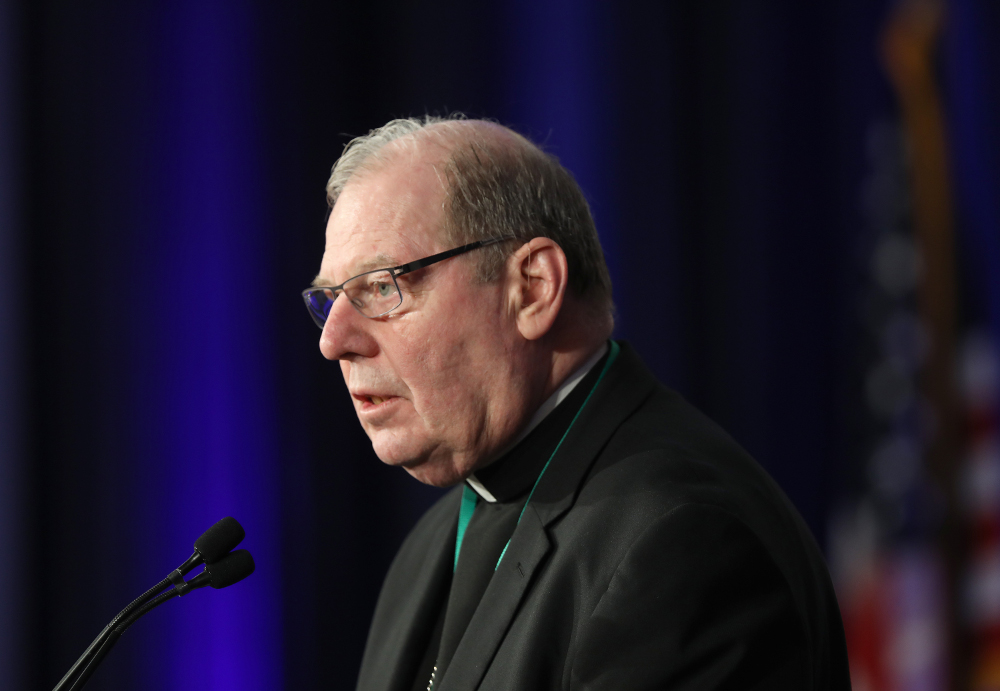 Bishop Robert Deeley of Portland, Maine, speaks on the first day of the spring general assembly of the U.S. Conference of Catholic Bishops in Baltimore June 11, 2019. (CNS/Bob Roller)

The U.S. bishops approved a plan to implement the "motu proprio" "Vos Estis Lux Mundi" ("You are the light of the world") issued in May by Pope Francis to help the Catholic Church safeguard its members from abuse and hold its leaders accountable.

The "motu proprio" was one of the measures that came out the Vatican's February Vatican summit on clergy sexual abuse attended by the presidents of the world's bishops' conferences.

The implementation plan passed 281-1, with two abstentions, June 13, the last day of the bishops' June 11-13 general meeting in Baltimore. Directives for implementing the new juridical instrument in the U.S. church were formally presented to the bishops June 11.

"Vos Estis Lux Mundi" established "procedures for reporting complaints of sexual abuse of minors or of vulnerable persons by clerics or by members of institutes of consecrated life or societies of apostolic life," said Bishop Robert Deeley of Portland, Maine, chairman of the bishops' Committee on Canonical Affairs and Church Governance, in introductory remarks preceding presentation of the proposed plan.

"The 'motu proprio' likewise holds church leaders accountable for actions or omissions relating to the handling of such reports," he added.

"Provide for the utilization of a national third-party reporting system by which reports can be received and conveyed to (the) proper ecclesiastical authority."

"Underscore the requirement to provide pastoral care to persons who might have been harmed."

"Encourage the utilization of proven experts chosen from among the laity."

"Affirm the oversight responsibility of the metropolitan throughout the investigatory process." In church parlance, a metropolitan is the archbishop in a province with other dioceses headed by bishops. There are 32 metropolitans in the U.S. church.

"Recognize the competence of each ecclesiastical province to determine an appropriate means to allocate costs for the investigation of reports and the provision of pastoral care to victims/survivors."

Deeley said the directives "are not intended to establish particular law for the United States." The provisions in "Vos Estis Lux Mundi" itself took effect June 1 and will last for three years. The implementation plan itself also would be good for three years, subject to a later review by the bishops.

The "motu proprio" said bishops' conferences need to establish a "public, stable and easily accessible" system for submitting abuse reports. The proposed implementation plan would urge provinces to publish information on this system broadly "in printed form, online and other media means."

When an abuse report is made, the proposed plan said, "it is highly encouraged that the metropolitan avail himself of an investigator" from among a group previously identified to conduct an investigation. Such a list would include "persons expert in relevant fields, such as law enforcement, criminal investigation, civil law, canon law, psychology and social work," it adds.

"The appointed investigator can make use of other proven experts, who are likewise appointed by the metropolitan, chosen predominantly from among laypersons, who are called upon in view of the nature of the report and the expertise needed to examine it."

The metropolitan should report any "conflict of interest or lack of impartiality" brought to his attention to the Vatican, including that of an investigator.

The implementation plan says, "Each province ought to determine the appropriate means by which it will establish a fund, should it choose to do so, or how it will otherwise allocate costs for the investigation of reports received and for the pastoral care of those who might have been harmed."

"In furtherance of the presumption of innocence enjoyed by the bishop," it says, "all appropriate steps are to be taken to protect his reputation, to assure the exercise of other rights afforded him under canon law, and to restore his good name when it has been illegitimately harmed."

A footnote in the proposed plan said that "in cases where the report concerns the metropolitan, or the metropolitan see is vacant," the most senior bishop in that province would be expected to carry out the directives.

"Vos Estis Lux Mundi" "took concrete steps to eradicate the crime of sexual abuse," Deeley told his fellow bishops June 11. But nothing the U.S. bishops can do, he added, "can derogate from the universal law" of the church or otherwise restrict the Vatican's capacity to act.

In response to a question posted by Bishop Gerald Kicanas, administrator of the Diocese of Las Cruces, New Mexico, Deeley said a metropolitan cannot start an investigation until directed to do so by the Vatican. "The Holy See may decide that that metropolitan is not the (proper) metropolitan to do it, for whatever reason."

Cardinal Sean O'Malley of Boston replied that "by our standards, waiting a month before you could begin an investigation is a far cry from the usual practice (in the United States) and could be seen as leaving a situation that could endanger young people," and he wondered aloud whether the U.S. bishops could urge the Vatican to get investigations started more quickly.

Other bishops raised concerns June 13 similar to those voiced by O'Malley. Deeley said the "within 30 days" phrase in "Vos Estis Lux Mundi" is "an accommodation to parts of the world where communications are not as readily available as they are here."

Some bishops expressed a desire to put an auditing system in place to make sure the implementation plan is working as intended. Bishop Deeley acknowledged such plan details could not be included in the document because they need to be developed. He reminded the bishops that the "metropolitan plan" is one means to report suspected abuse, but "not the only means."