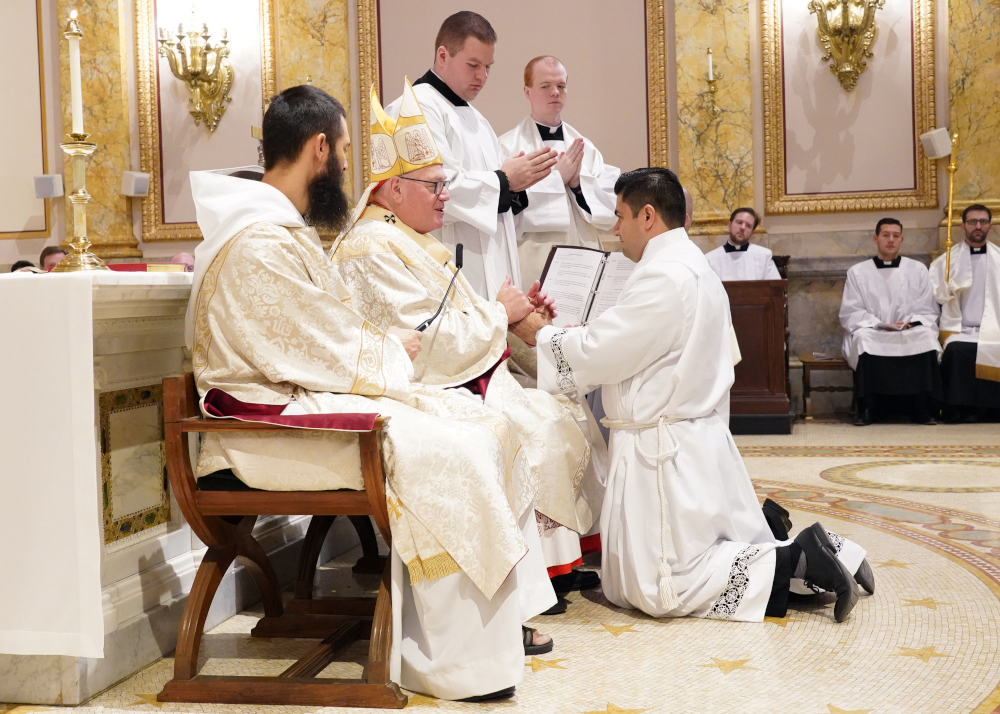 Updated Nov. 12 at 2:00 PM EST to reflect the bishops adopted the sixth edition of the Program of Priestly Formation.

The U.S. bishops Nov. 12 adopted the sixth edition of the U.S. Conference of Catholic Bishops' Program of Priestly Formation for U.S. dioceses and religious orders.

The vote on the document, popularly known among the bishops as "the PPF," was 226-4, with three abstentions. It needed two-thirds of the bishops, or 179 votes to ensure passage. Before it can be implemented, it must first receive a "recognitio," or approval, from the Vatican Congregation for the Clergy.

"It is not an entirely new document," said Cardinal Joseph Tobin of Newark, New Jersey, when introducing the document Nov. 11, the first day of the bishops' fall general meeting in Baltimore. "It retains and builds on those aspects of PPF 5 which have proven to be the most effective."

One change is how a seminarian's progress to ordination is tracked. What had been a seminary college or "pre-theology" followed by graduate studies – known as the theologate – is being replaced by new terms: the "propaedeutic stage" with preparatory and introductory teaching lasting one to two years, and a "discipleship stage," which is to last at least two years.

The Program for Priestly Formation takes into account developments in the church and society in recent years.

"Weaknesses of ethical standards and a moral relativism have a corrosive effect on American public life as seen, for example, in marriage and family life, in business and in politics," the Program for Priestly Formation now says.

"Within the church, clericalism and abuse of power have had a corrosive effect. The scandalous and criminal behavior of some clergy who have a used minors and engaged in sexual misconduct with adults, including seminarians, has caused great suffering for the victims and damaged the church's witness in society," it says. "This has resulted in a loss of credibility for the church and an overall lack of respect for religion. Both the nation and the church are summoned to renewal and to a real integrity of life."

It also contains strict instructions: "Any seminarian found to have pathological sexual attraction to minors is to be dismissed from the seminary with no possibility for readmission to the same or another seminary."

Elsewhere in the document, which nears 300 pages in the version given the bishops, it says: "The widespread availability of pornography on the internet is a pervasive reality, and a pernicious threat to human and moral development," and "Catholic institutions are not immune to the persistence of racism in our society. ... The evil of racism continues to be a factor in the social fabric of the United States."

Thanks to evidence showing the connection of Catholic schools in fostering vocations, new wording was added prior to the vote: "Catholic schools and parish religious education programs are supportive environments that foster intellectual curiosity and encourage the development of love of God and neighbor. Rooted in the teachings of the Catholic faith, schools and programs provide an invaluable setting in which vocations to marriage, priesthood and consecrated life can be nurtured."

The Vatican's "recognitio," or approval, to the fifth edition of the Program for Priestly Formation expired in 2015, according to Tobin in a message to his fellow bishops. That year, though, the Vatican extended the recognitio for five-years, through 2020.

In 2016, a working group was selected by the committee to begin work on a sixth edition. In 2017, that group, run by Bishop Earl Boyea of Lansing, Michigan, began its deliberations. In 2018, input from bishops was sought given the Vatican's issuance the year before of the new "Ratio Fundamentalis Institutionis Sacerdotalis" (The Gift of the Priestly Vocation).

In his introductory remarks about the document, Tobin said it "allows latitude for individual dioceses, provinces and regions" so bishops can "adapt this to individual circumstances."

"The PPF's focus is on benchmarks – the outcomes that must be achieved by the seminarian before advancing to the next stage in his formation, rather than on chronological times," the cardinal said, adding that "new weight (is) given to stages rather than years."