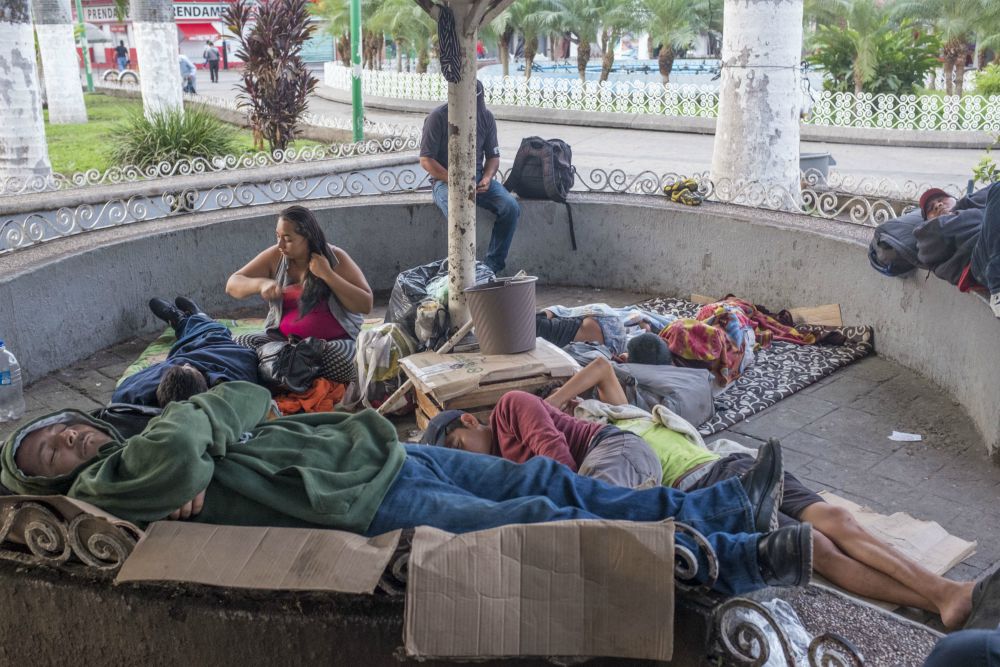 Migrants from Central America sleep in a kiosk in Tapachula, Mexico, May 24. (CNS/Keith Dannemiller)

While the sex abuse crisis consumed the June meeting of the U.S. Conference of Catholic Bishops in Baltimore, prelates who work on the border, such as Bishop Daniel Flores of Brownsville, Texas, have been facing a different crisis also involving children.

In less than a year, at least six children are believed to have died while in the custody of immigration officials along the border. While immigration along the U.S. southern border once involved almost exclusively men looking for work, women with children or entire families are now the ones regularly making the dangerous trek, fleeing poverty and violence.

"I know this gathering has been dominated by the question of abuse and we have to deal with [it]," Flores said in an interview with Catholic News Service June 12. "It has to be clear that this is something that will not be tolerated."

However, he said, the church also must "express" itself more strongly about its teachings when it comes to migrants and the situation along the border is one affecting the most vulnerable in society, including many children.

"I feel that as a [bishops'] conference, we must express ourselves more strongly when it comes to the dignity of immigrants, to say that they are not criminals, that they are vulnerable families and we need to invite all the governments involved, not just the U.S., to defend the migrant as a human being, to not cast the person aside as someone who doesn't matter and is a problem," Flores said.

Specifically, he was addressing the recent announcement by the government of Mexico that it will take stricter measures to prevent the flow of migrants traveling to the north — a measure taken to ward off a threat made by U.S. President Donald Trump. The president threatened to place higher tariffs on the country's goods that come into the U.S. unless Mexico does more to prevent migrants from reaching the border. 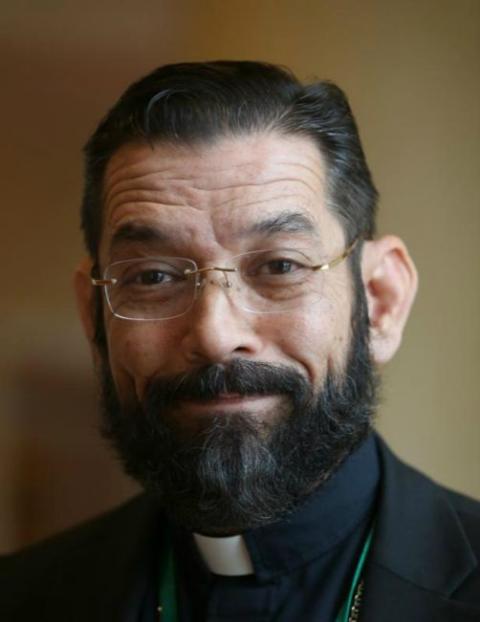 Bishop Daniel Flores of Brownsville, Texas, poses for a photo June 13, during the spring general assembly of the U.S. Conference of Catholic Bishops in Baltimore. (CNS/Bob Roller)

"Governments shouldn't treat immigrants as pawns, like chess pieces," said Bishop Flores, who also shared recent plans for a new building for a center that will welcome migrants in a dignified way near the border towns of Brownsville and McAllen in Texas. Both towns are part of his diocese.

The center, popularly known as the "respite center," run by Sr. Norma Pimentel, executive director of Catholic Charities of the Rio Grande Valley, has gained national attention for its work with recent arrivals, providing food, clothes and helping guide migrants toward loved ones in the U.S. But it also has had to move from about four or five different locations around McAllen for various reasons.

"We're in the final preparations" of choosing a design and making other choices for a permanent building, said Flores.

Georgetown University has been working with Pimentel, a member of the Missionaries of Jesus, at Catholic Charities to identify an ideal building, along with architects, and also providing guidance in organizing a capital campaign to fund it, said Flores.

"We want a place that families can enjoy, a safe place where children can wait with their mothers or fathers. … My dream is for a place that has a little space so that children can play 'futbol' [soccer], something that reminds them of a normal life because what they have gone through is out of the normal, these children and their families," said Flores. "The poor deserve something beautiful."

Flores said they also want to build a chapel at the permanent center for the families, honoring what the pope has said, that attention must be paid to the spiritual needs of the poor.

"We're praying so that the Lord will open the way for us," he said. "We're looking at the simple details, spaces for prayer, green spaces. The poor deserve the best that we can do for them."

The June 11-13 gathering of bishops addressed on the first day the situation of immigration and how the U.S. church is advocating for certain aspects, but there seems to be a struggle with Trump administration officials over humanitarian help and policies that target certain immigrants. Prelates such as Flores are left to deal with the day-to-day matter of watching the tense situation unfold and the human consequences of government policies made in Washington.

"I know the agenda was tight," he said of the bishops' June meeting. "And there were some important points made, but we as a conference need to call attention to what's being experienced at the border and with these families."

Flores called attention to a June 10 statement by the Mexican bishops' conference that questioned the government's plan to restrict the movement by migrants in Mexico.

"Our brother migrants must never be a bargaining chip. No negotiations should be placed above what the church and civil society have defended for years: not criminalizing migrants nor the defenders of human rights," the Mexican bishops' statement said. "If we have rejected as Mexicans the construction of a [border] wall, we cannot turn ourselves into that wall," which would stop migrants in southern Mexico.

When the U.S. bishops' working group on immigration made its presentation, Bishop Jaime Soto of Sacramento, California, asked that the body of bishops explore the possibility of joining their Mexican counterparts and perhaps also include Catholic bishops from Central America to "speak with one voice" in a joint statement or letter calling attention to the issue.

"The administration unfortunately linked trade and immigration in the latest controversy with tariffs and it sends a chill throughout the region both here and in Mexico," said Soto. "My fear is that it's not over. It will come back again. There will be another round ... with this holding immigrants and refugees hostage and using trade as a weapon, the weaponization of trade and how offensive that is."

On June 14, Bishop Joe Vásquez of Austin, chairman of the bishops' Committee on Migration, issued a statement supporting the Mexican bishops' statement.

"We stand in solidarity with our brother bishops in Mexico. We implore the administration not to confuse economic issues with the humanitarian issues of forced migration. Families fleeing violence, persecution and extreme poverty must be treated with love and compassion and not be used as a tool for negotiations," he said.

"As always, we recognize the right of a nation to secure its borders. However, the Gospel teaches us to love our neighbor," he continued. "This is the imperative we must follow in treating our migrant brothers and sisters with compassion and dignity. We should be working with the governments of the Northern Triangle and the Mexican government to eradicate violence and improve the local economies from which families are being forced to migrate."

During the meeting in Baltimore, Bishop Mark Seitz, who also serves on the border as head of the Diocese of El Paso, Texas, told CNS he realized the June assembly was going to be almost solely focused on establishing a system for bishops to be held accountable, but nevertheless he tried to update fellow bishops on his own because "just as we find in the rest of the country, bishops have varying levels of understanding of what's really happening," he said.

"I think they're all sympathetic to the plight of migrants, but you almost have to be there to really appreciate it," he said, "I've issued any number of invitations to come to El Paso and stay with me, to come to see what the reality is on the border."

In El Paso, organizations helping migrants have seen a "rapidly changing situation," he said, in the form of a steep drop in the number of people making their way into the U.S.

That's because Mexico "is making a show of cooperating with the Trump administration to turn back refugees," he said.

Local organizations that welcomed anywhere from 800 to more refugees a day now see under 300, he said.

"That change is pretty drastic and very concerning to me," he said. "What alternatives are there for people who are fleeing threats against their life, threats against their families? So, I think we're boxing those people more and more into a corner where there are fewer and fewer options."

And Mexico is a dangerous place even for those who already live there, he said.

"The whole movement to declare Mexico a safe place for asylum is, to me, untenable and unreasonable because Mexico is going through its own chaos and facing violence, gangs who are targeting those who are most vulnerable and that means people who are passing through. To call them a safe haven for a person who might seek asylum is to me just a very sad evasion of the reality," he said.