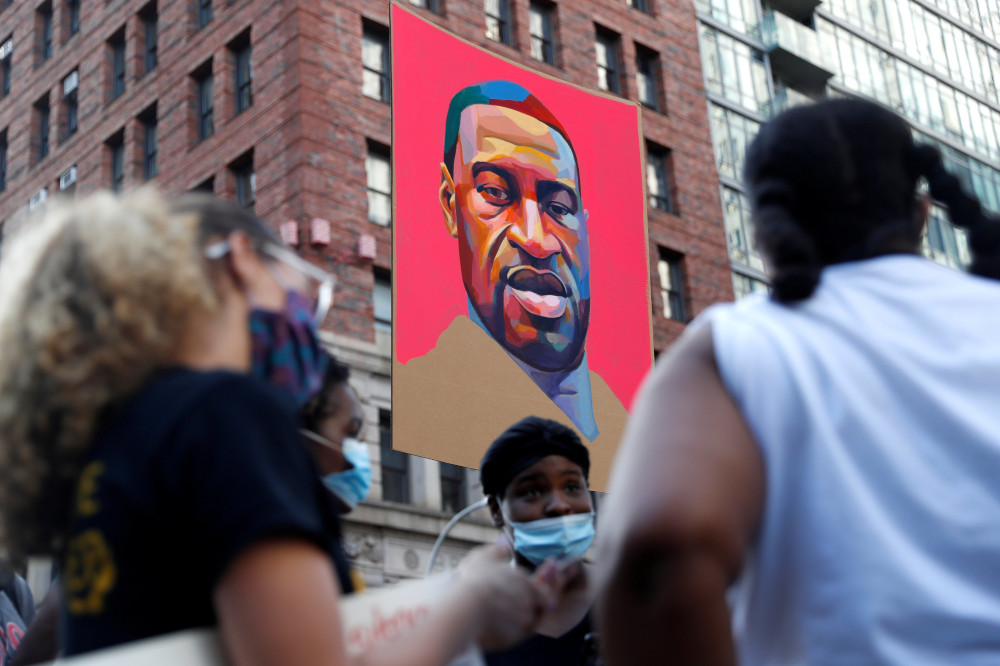 A portrait of George Floyd is seen in New York City during a protest against racial inequality June 8, 2020. (CNS/Reuters/Shannon Stapleton)

The U.S. bishops renewed the mandate of their Ad Hoc Committee Against Racism for a second three-year term.

The proposal was aired Nov. 16, the first day of the bishops' Nov. 16–17 fall general meeting, which this year is being conducted entirely online. The vote to reauthorize the committee, taken via email Nov. 16, was 194-3 with one abstention; results were announced Nov. 17. The renewal required passage by a majority of bishops present and attending; 301 bishops participated in the meeting at its peak Nov. 16.

Created in August 2017 for a single three-year term, its mandate would have expired in August.

However, with the cancellation of the U.S. Conference of Catholic Bishops' spring meeting in early June due to the pandemic, the USCCB Executive Committee approved an action item later that month from its Committee on Priorities and Plans in mid-June to continue the ad hoc committee's authorization "until the next USCCB General Meeting."

The ad hoc committee has drafted an operational plan for the USCCB's 2021-24 strategic plan.

The plan, the Committee on Priorities and Plans report said, "will focus on the areas of combating racism in education, training the trainer to support theological, liturgical and pastoral needs, youth and young adult engagement, formation of seminarians and religious, advising dioceses, providing communication outreach through podcasts, social media, bishop roundtables and more, providing public policy engagement and collaborating with ecumenical partner organizations."

The ad hoc committee's mandate includes supporting implementation of the document "Open Wide Our Hearts: The Enduring Call to Love — A Pastoral Letter Against Racism," developed by the USCCB Committee on Cultural Diversity in the Church in English and Spanish and approved by the body of bishops in 2018.

It also spearheaded listening sessions with 13 dioceses on implementing the pastoral letter, addressed dozens of dioceses and ministry leadership organizations, served as a key collaborator in the Catholic Social Ministry Gathering, participated in an encounter with migrants and policy discussions affecting communities of color, recorded a conversation on the pastoral letter in collaboration with the Communications Department and much more, according to the Committee on Priorities and Plans. 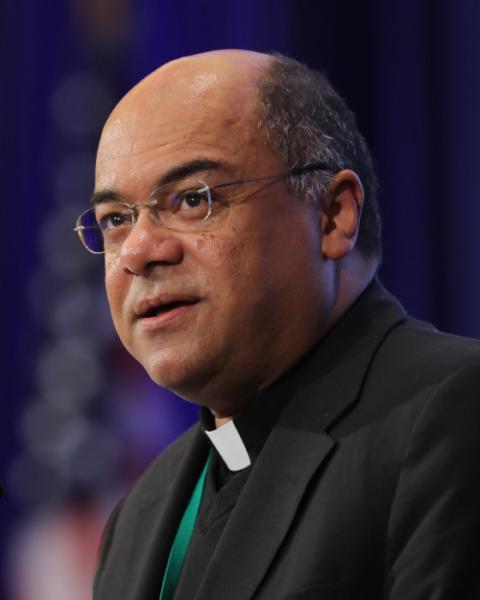 "In sum, the [ad hoc committee] has been busy doing the work it was formed to do, and that with only a single full-time associate director," it added. The rationale behind its formation "has been further fortified by the events following the death of Mr. George Floyd and other examples of impartial treatment of U.S. citizens by police due to their race."

"The committee has fulfilled its mandate through some very enlightened work to address the evil of racism," said a prerecorded message from Archbishop Timothy P. Broglio of the U.S. Archdiocese for the Military Services, USCCB secretary and chairman of its Committee on Priorities and Plans, which advanced the proposal.

For the next three years, Broglio added, the committee has developed "a very ambitious and promising plan."

The listening sessions were interrupted this year due to the coronavirus pandemic, said Bishop Shelton J. Fabre of Houma-Thibodaux, Louisiana, chairman of the ad hoc committee, during a news conference following the USCCB's Nov. 16 session. "We hope that, once we get beyond COVID, to pick up on the listening sessions," he added.

After episodes of racism and police violence roiled many U.S. cities this summer, "I have talked to my brother bishops in the dioceses," Fabre said, "offering my assistance to them."

During the floor discussion on the extension, Bishop John E. Stowe of Lexington, Kentucky, while championing the proposal, took issue with the outside funding of the ad hoc committee; its budget is covered by contributions from the Knights of Columbus, the Black and Indian Missions Office and the Catholic Campaign for Human Development.

"This is the second committee that is being funded by outside sources. If this is really a priority for the conference as it should be, we should be providing the funding for these committees," Stowe said, to protect them from "the direction they might get from some of the funders."

Bishop Fabre, at the news conference, replied to a question about Bishop Stowe's comments by saying the outside funding was "the quickest way for the bishops' conference to respond" to issues of racism and that "the important thing is that the work is being done." He added his expectation that "in 2023 or thereabout, that it would be integrated into the USCCB structure."