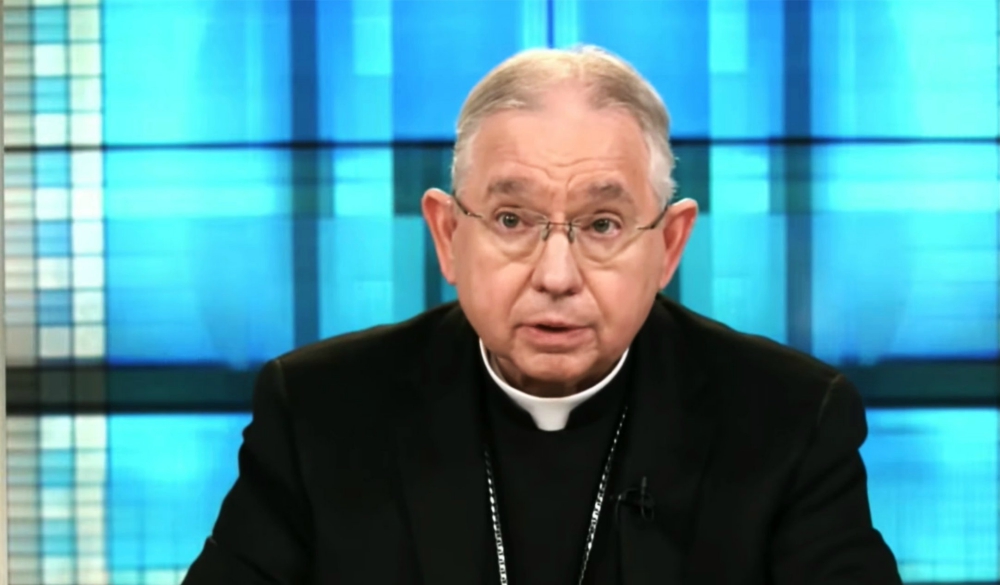 Los Angeles Archbishop José Gomez, president of the U.S. Conference of Catholic Bishops, announces Nov. 17 that he is forming a committee to look at various policy issues with regard to the incoming administration of President-elect Joe Biden. (CNS/Screen Grab)

Last year, when the bishops elected Los Angeles Archbishop José Gomez as the president of their conference, I asked one of the older bishops what we could expect. "Well, I would not expect much in the way of leadership," he replied.

The accuracy of that remark was on display Tuesday afternoon when Gomez explained that several committee chairs had approached him about the need for a statement regarding the election of Joe Biden as the nation's next president. He said he had brought the matter to the executive committee and they had agreed and, what is more, they had unanimously supported the statement he was about to read.

The statement was unfortunate. (In the video at this link, it begins at 2:27:20.) He said the bishops looked forward to the new administration's policies on a host of issues from immigration to climate change.

But, he added, and you could almost cue the ominous music in the background, some of Biden's stances were "against some fundamental values we hold dear as Catholics." He mentioned the incoming president's support for repealing the Hyde Amendment and restoring Roe v. Wade, which would "undermine our preeminent priority of the elimination of abortion," echoing last year's regrettable debate about labeling abortion the "preeminent" political concern of Catholics.

Gomez went on to list "restoration of the HHS mandate [on insurance that covers contraception], passage of the Equality Act [prohibiting discrimination against gay and lesbian Americans] and unequal treatment of Catholic schools."

Then the archbishop devolved into tired talking points conservative Catholics have been trafficking in for years. "When politicians who profess the Catholic faith support [these policies], there are additional problems. Among other things, it creates confusion among the faithful about what the church actually teaches on these questions."

Does it? Could Gomez produce a single Catholic who does not know what the church teaches on these issues? Has Biden ever claimed he was speaking on behalf of the church when addressing these issues? It is nonsense.

Gomez announced the formation of a working group to study the nonexistent problem.

The archbishop claimed he was merely following a "precedent of four years ago when Cardinal [Daniel] DiNardo, then the president of the conference, similarly faced a transition to a new administration threatening grave and imminent harm on critical issues."

I remember that there was a working group on immigration. Here is a link to the statement the bishops adopted four years ago. Note they started by congratulating President-elect Donald Trump and closed by promising him their prayers, none of which made it into Gomez's statement this time.

Gomez should have known better. Monday, as the U.S. bishops began their virtual plenary meeting, Archbishop Christophe Pierre, the apostolic nuncio, spoke to the bishops about the challenges of the moment. He said, in part:

In a pluralistic, fragmented world, we are invited to dialogue. What is the method proposed in Fratelli Tutti? In chapter six, Pope Francis speaks of dialogue. But, when we speak of dialogue, what are we really talking about? It cannot be like those on the news who shout past each other, demonstrating that they are more interested in power and their own ideas than the common good (Fratelli tutti, n. 200). Dialogue must be related to truth.

Maybe Gomez couldn't hear the nuncio give his address.

The Holy Father, just last week, called to congratulate Biden on his victory, and the two reportedly discussed areas of mutual collaboration. Indeed, last week Gomez himself issued a statement congratulating Biden and Vice President-elect Kamala Harris. "I believe that at this moment in American history, Catholics have a special duty to be peacemakers, to promote fraternity and mutual trust, and to pray for a renewed spirit of true patriotism in our country," Gomez said.

Last month, the Holy Father's encyclical was all about the need for the human family to come together in the face of this horrible pandemic and the economic distresses it has both exposed and created. The pope wrote:

At a time when various forms of fundamentalist intolerance are damaging relationships between individuals, groups and peoples, let us be committed to living and teaching the value of respect for others, a love capable of welcoming differences, and the priority of the dignity of every human being over his or her ideas, opinions, practices and even sins.

And, as the nuncio indicated, there was an entire section of the encyclical dedicated to the subject of dialogue as the means by which the church witnesses in the public square. Did Gomez not have time to read Fratelli Tutti?

Maybe Gomez recalls the opening lines of Lumen Gentium, the Dogmatic Constitution on the Church issued by the Second Vatican Council. "The Church is in Christ like a sacrament or as a sign and instrument both of a very closely knit union with God and of the unity of the whole human race," the council decreed. If the church is to be a sacrament of unity in the world, why did Gomez welcome the new president with such rhetorical petulance?

Gomez has finished the first year of his three-year term. It is foolish to think he is up to the task of helping restore the fractured unity of the conference he leads. That unity can only be built on the rock of Peter, and he has shown for two meetings in a row that when the culture warriors want him to follow them, and doing so requires spurning the direction indicated by the pope, he will follow the culture warriors. And the culture warriors keep winning election as committee chairs, so Gomez is going to continue to be pressured to follow their lead.

In the last month of 1711, the Tory government of the United Kingdom sought parliamentary approval of its effort to negotiate an end to the War of Spanish Succession. The House of Commons supported the policy, but in the House of Lords, the policy failed by 12 votes. Queen Anne, who favored the government's peace proposal, responded by creating 12 new peers, giving the government a majority in both houses. Among the new peers was Samuel Masham, husband to the queen's favorite, Abigail, played so brilliantly by Emma Stone in the movie "The Favourite."

The U.S. bishops' conference will not change until the composition of the body changes, and that means the Congregation for Bishops needs to get to work. Twelve peers were all Queen Anne needed. The bishops' conference needs about 40 new bishops who will follow Francis' lead.