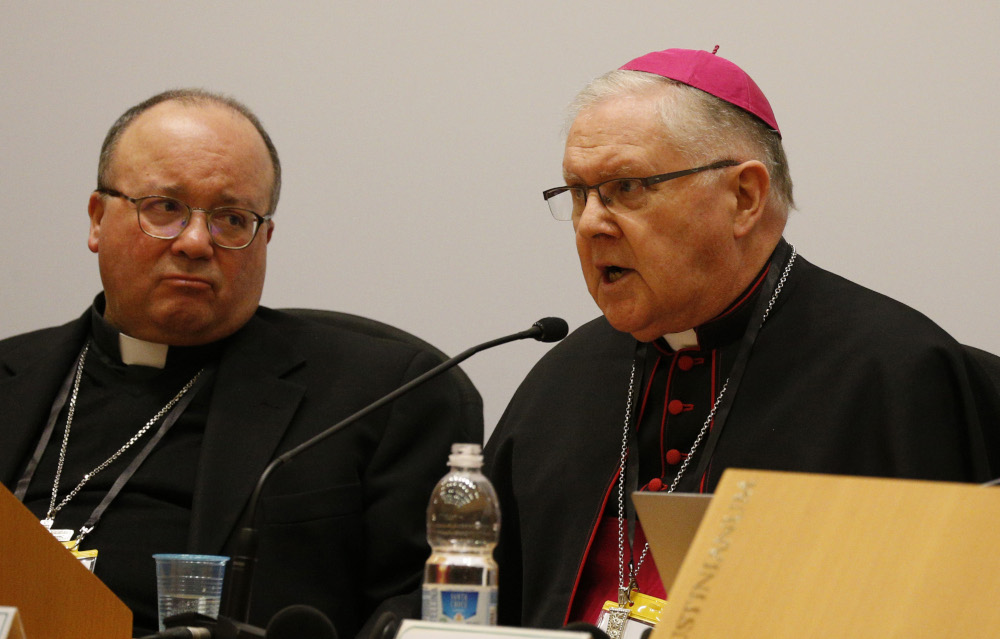 Archbishop Charles Scicluna of Malta and Archbishop Mark Coleridge of Brisbane, president of the Australian bishops' conference, attend a press briefing after the opening session of the meeting on the protection of minors in the church at the Vatican Feb. 21, 2019. (CNS/Paul Haring)

Immediately after asking bishops and religious superiors to be concrete in confronting the clerical sexual abuse crisis and the need to protect children in the church, Pope Francis handed them a list of 21 action items to consider.

From publicizing the contact information for reporting cases of abuse to cooperating with local law enforcement, the action items were drawn from suggestions made by bishops from around the world, the pope said, and should "assist in our reflection."

The 21 items are "a simple point of departure," he said, and "are not meant to detract from the creativity needed in this meeting."

Several survivors of abuse, however, expressed surprise about and unhappiness with the list.

The first item on the list is "to prepare a practical handbook indicating the steps to be taken by authorities at key moments when a case emerges."

Archbishop Charles Scicluna of Malta, who deals with abuse cases for the Congregation for the Doctrine of the Faith, later told reporters that his office is preparing such a handbook – in a simple question-and-answer format – and it should be ready for publication within a few months.

The archbishop said the 21 items "govern practically all the aspects of getting it right," but they must be discussed by summit participants. "These are not decisions taken, otherwise we could go home today."

The action items also included suggestions that dioceses have "trained and expert people" on hand for an initial "discernment" of accusations and insisted that the diocese "inform the civil authorities and the higher ecclesiastical authorities in compliance with civil and canonical norms." 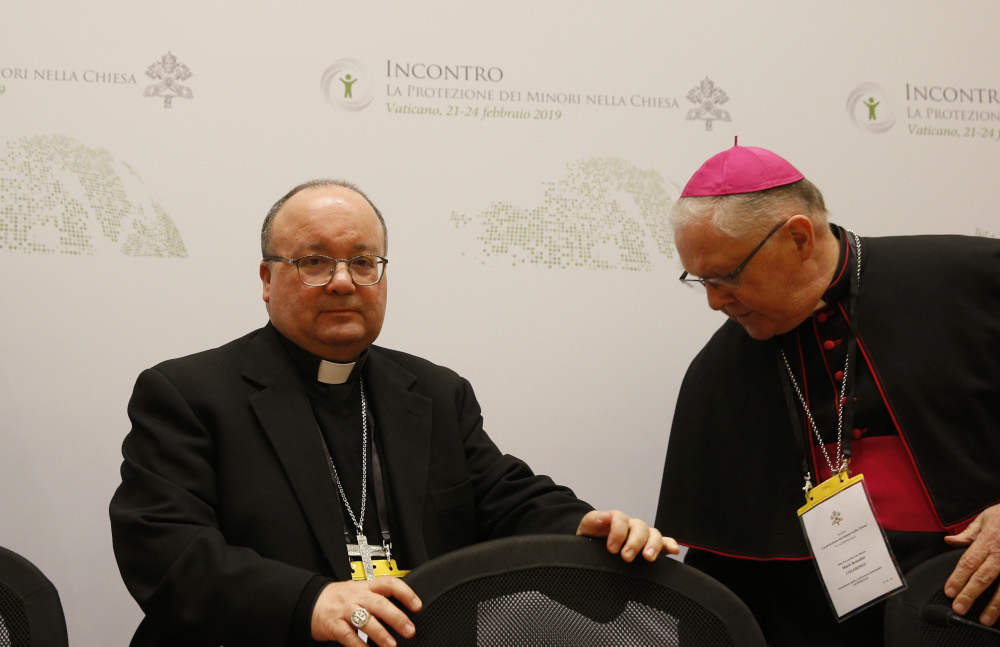 Archbishop Charles Scicluna of Malta and Archbishop Mark Coleridge of Brisbane, president of the Australian bishops' conference, arrive for a news conference after the opening session of the meeting on the protection of minors in the church at the Vatican Feb. 21, 2019. (CNS/Paul Haring)

Scicluna insisted on the importance of involving local police and other authorities, especially because while bishops exercise spiritual authority over their priests, they have no actual "coercive measures – and we don't have any nostalgia for the coercive measures of the Inquisition" – to force priests to cooperate with investigations and obey when punishment has been imposed.

Another suggestion on the list was to establish "specific protocols for handling accusations against bishops," a matter that was highlighted in 2018 when the public was informed of credible allegations made against then-Cardinal Theodore McCarrick.

Participants at the Vatican summit Feb. 21-24 also were asked to discuss ways to "accompany, protect and treat victims, offering them all the necessary support for a complete recovery" and to offer healing and support to the communities where abusive priests ministered.

Perhaps more controversially, the possible action items also included considering "penitential and recovery routes for the perpetrators" and an insistence on the "presumption of innocence" found both in natural law and canon law.

To protect the rights of an accused, one suggestion said, "it is necessary to prevent the lists of the accused being published, even by the dioceses, before the preliminary investigation and the definitive condemnation."

Scicluna said being accused of abuse is not reason enough to release the person's name publicly; there must at least have been a review of the allegation and determination that it is credible. A criminal court trial or full canonical process finding the person guilty would be what consists defining the allegation as "substantiated," he said.

One item not on the list that Scicluna said should be included is a clearer policy on keeping victims informed of the status of cases against their abusers. The canonical procedures of the church are not criminal trials, but he said the local church should assign someone to keep in contact with the victims as the process proceeds, and the victims have a right to be informed about the process' conclusion.

"Many victims are hurt by the fact that they do not receive the final report," he said. "It's a lack of respect."

Another suggestion on the list was that the church "observe the traditional principle of proportionality of punishment with respect to the crime committed," including when deciding whether "priests and bishops guilty of sexual abuse of minors leave public ministry" or are dismissed from the clerical state all together.

Apparently in some parts of the world, the sexual abuse of a 14- or 15-year-old girl is not considered abuse of a minor since she is old enough to marry. However, in cases of clerical sexual abuse, current church law defines a minor as any person under 18 years of age. 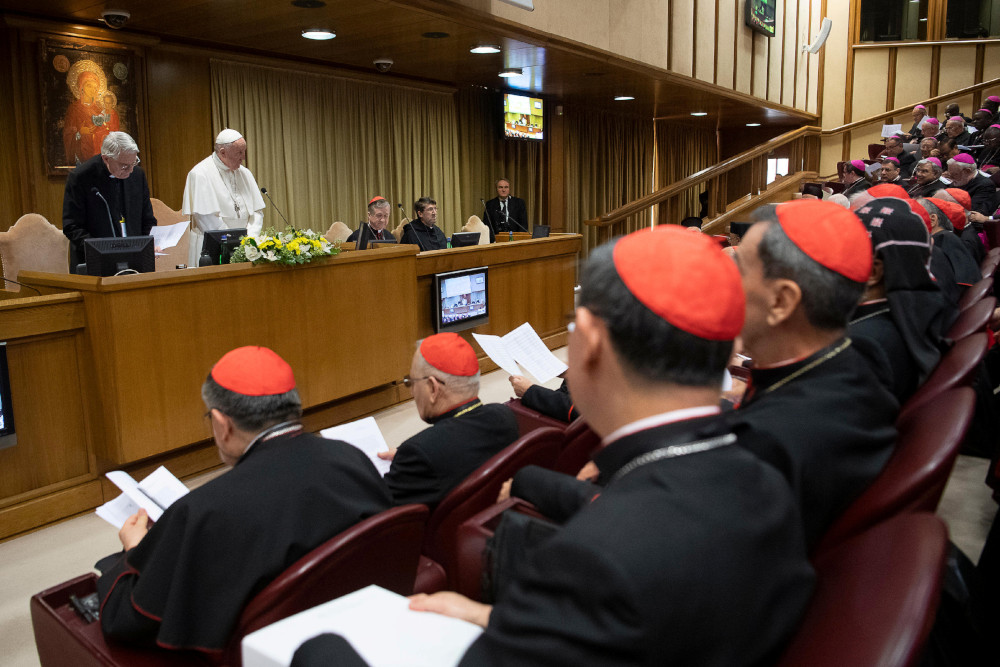 Pope Francis leads the opening session of the meeting on the protection of minors in the church at the Vatican Feb. 21, 2019. (CNS/Vatican Media)

Leona Huggins, who represents the survivor's network, SNAP, in British Columbia, told Catholic News Service that she found the list of suggestions to be "absolutely shocking," especially because she and the 11 other survivors who met with the summit organizing committee Feb. 20 were there to have their voices heard.

None of their suggestions made it onto the list, she said. Their No. 1 priority is to get the church to mandate a policy of zero tolerance for abusers and those who cover up their crimes.

She and another survivor were especially struck that the first item on the list was producing a "handbook" when "I think we all know what the right thing to do is" when an allegation is made that an adult has raped or assaulted a child.

Back in 1992, when Huggins found out the priest who had abused her was starting a youth group: "I knew to go to the police. I don't have expert training. ... I don't have years of theological training that these men have. But I knew."

Peter Isely, spokesman for the Ending Clergy Abuse coalition, said while some officials described the list as a "road map," he saw it as drawing "a circle" leading the church back to where it started 20 years ago.