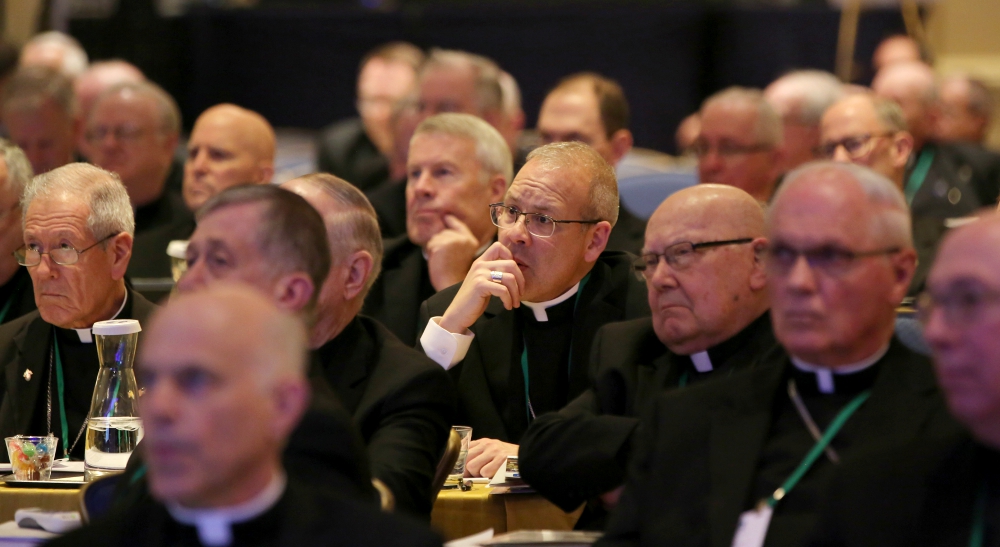 Bishops listen to a speaker Nov. 14, 2018, at the fall general assembly of the U.S. Conference of Catholic Bishops in Baltimore. (CNS/Bob Roller)

There are 441 active and retired Catholic bishops who oversee 196 Latin- and Eastern-rite dioceses and archdioceses and one "personal ordinariate" (for former Anglican groups and clergy in the United States who became Catholic) in the United States and U.S. Virgin Islands. This includes 15 cardinals: six who lead archdioceses, five who are retired and four in other positions.

More than a third (168) of U.S. bishops are retired; the remaining 273 active ones include six cardinals, 29 archbishops, 162 diocesan bishops and 76 auxiliary bishops. Bishops submit their retirement to the pope at the age of 75; about six to eight bishops retire each year and are replaced, so the total number of active bishops remains roughly the same.

The bishops themselves make up the U.S. Conference of Catholic Bishops and are served by a staff of approximately 315 laypeople, priests, deacons and religious located at the Conference headquarters in Washington, D.C., according to the U.S. bishops' conference website. The staff work is overseen by the General Secretariat, an office currently headed by Msgr. Brian Bransfield.

The average bishop in the U.S., according to survey data from 2016, is a non-Hispanic white 65-year-old. (In fact, about 88% of bishops are white.) He has served for 12 years in a diocese of about 250,000 Catholics in 92 parishes, with 87 active diocesan priests (another 51 retired, infirm or serving elsewhere), 98 permanent deacons and about 200 mostly-retired sisters.

He graduated from a Catholic high school, went to college seminary and earned a graduate degree in theology, before being serving as an associate pastor and pastor. He also spent several years in an administrative role in a diocese, according to the survey, published this year in the book Catholic Bishops in the United States: Church Leadership in the Third Millennium.

The average age of a bishop's ordination to the priesthood is 27 for ordinaries who head dioceses or archdioceses, and 30 for auxiliary bishops, who assist ordinaries. About half (42%) went straight from being a priest to an ordinary, while another 42% served first as an auxiliary. Six percent were coadjutors, or bishops named to assist an ordinary but who have a right of succession.

Other data from the 2016 survey of U.S. bishops include:

Read this next: Conservatives still rule the US bishops' conference