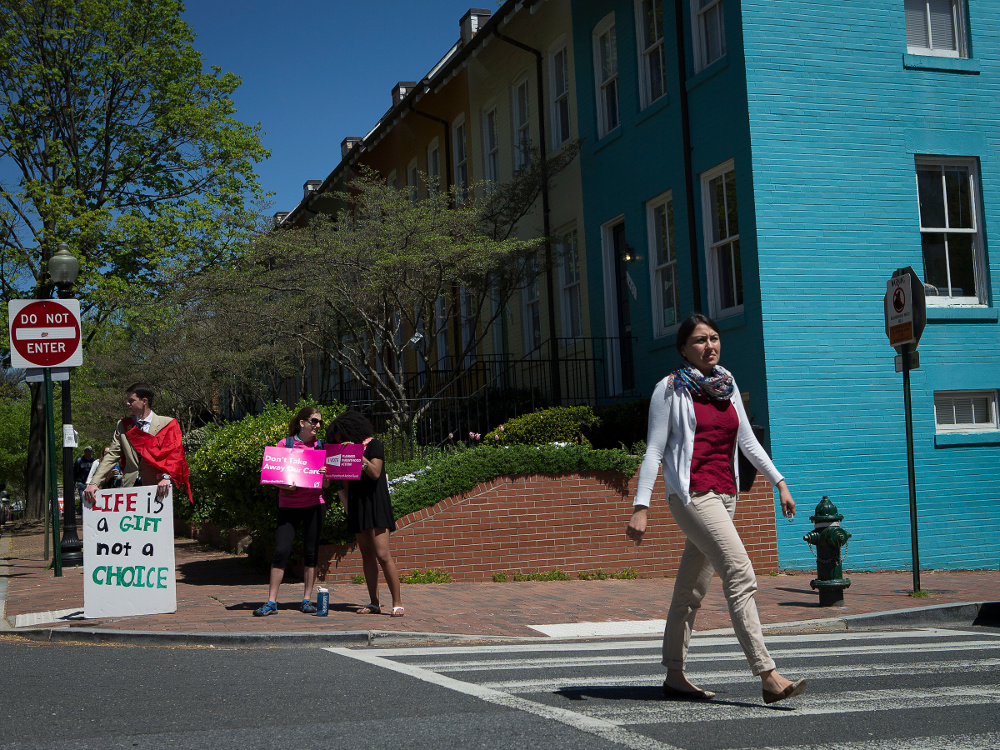 Demonstrators on both sides of the abortion issue gather outside the campus of Georgetown University in Washington April 2016. (CNS/Tyler Orsburn) 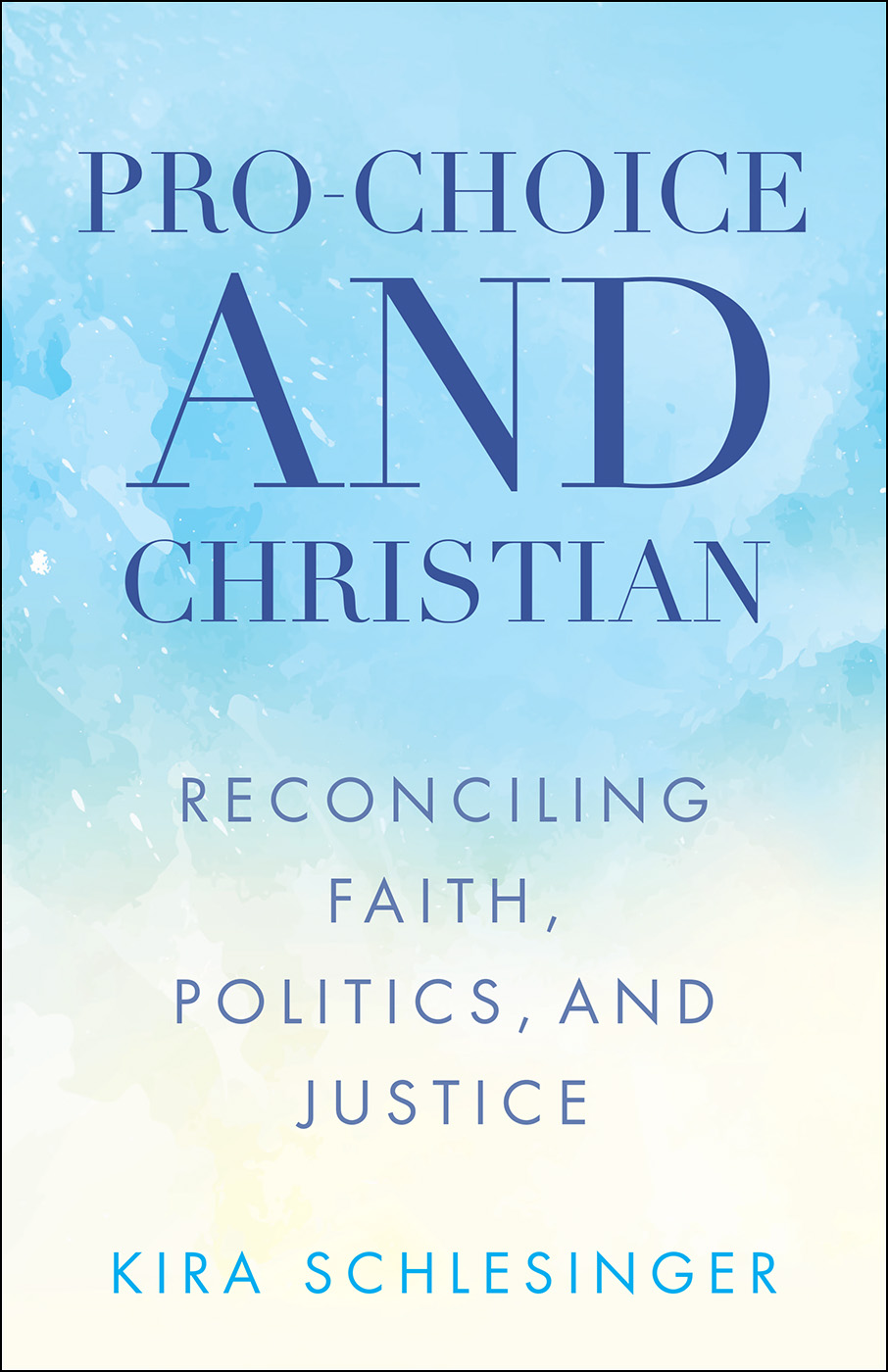 Kira Schlesinger, Episcopal priest and author of Pro-Choice and Christian: Reconciling Faith, Politics, and Justice, wouldn't be surprised. She thinks that most Christians are like those sisters — part of a "muddled middle" on the ethics and legality of abortion. Caught in the tension between their respect for the value of human life, one the one hand, and their belief that there are meaningful differences between a zygote and third-trimester fetus, on the other, most Christians, Schlesinger thinks, cannot be neatly categorized as "pro-life" or "pro-choice."

Schlesinger's book has two major, interrelated goals. First, she wants to speak to Christians in the "muddled middle" and contribute to honest, bridge-building dialogue among Christians with different viewpoints on abortion. Second, she wants to argue against the simplistic and regrettably commonplace assumption that an anti-abortion position is the only legitimate Christian position.

In pursuit of both goals, Schlesinger's short book offers overviews of theological history, U.S. abortion politics pre- and post-Roe v. Wade, biblical exegesis, a sketch of the contemporary political and theological landscape, and frameworks for bridge-building conversations among Christians.

That is a tall order for such a slim volume, but Schlesinger's brief overviews are well-researched, clear, engaging and valuable as a springboard for conversation.

Readers unfamiliar with the history of Christian thought on abortion and other reproductive justice issues will find her early chapters especially helpful. Schlesinger's first chapter, for example, traces the development of positions on abortion in patristic, medieval and Reformation theology. She focuses on the notion of "ensoulment" and represents the diversity of views among patristic and medieval writers, who roundly opposed abortion without, generally, viewing it as equivalent to murder.

Schlesinger also demonstrates how their opposition to abortion reflected both a respect for fetal life and a low estimation of sex, sexuality and women. Here, she cites some of the greatest hits of patristic misogyny, Tertullian's infamous metaphor of woman as a "temple built over a sewer" among them. Her point is to show how their negative views of women have shaped traditional and contemporary anti-abortion arguments. 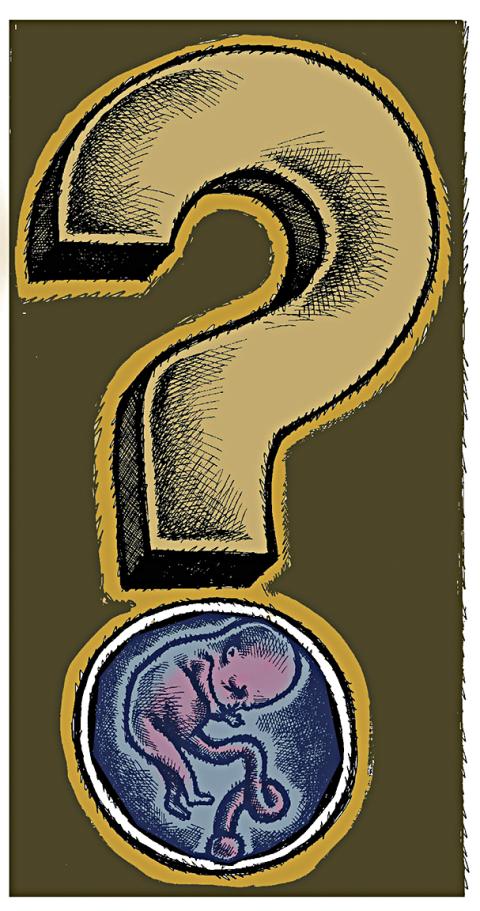 Consistent with her commitments to honesty and evenhandedness, Schlesinger criticizes the historical relationship of both pro-choice and anti-abortion politics to eugenics. Her discussions of Dr. Horatio Storer and Margaret Sanger are illustrative.

Storer, concerned that free black and immigrant women were having more children than middle- and upper-class white women, led the mid-19th-century medical campaign against abortion. A prime target of the campaign was "quickening" (the point at which a pregnant person can feel the fetus move) as a measure of fetal development. Storer's work against birth control, abortion and the legitimacy of "quickening," Schlesinger explains, wrested authority over pregnancy away from pregnant women and midwives, and served white supremacist and nativist ends.

There is much else to recommend the book to moderate readers interested in learning more, and thinking better, about abortion. She troubles the biblical proof-texting that is all too common in antiabortion arguments, and argues for believing the experiences of pregnant women.

She articulates an "expansively pro-life" perspective on abortion that attends to the connections between structural oppression, particularly white supremacy and poverty, and the need for abortion.

Above all, Schlesinger models the respectful engagement she advocates in her book, fairly rehearsing the arguments of anti-abortion Christians while being honest about the political, ethical and theological limitations of hardline anti-abortion views.

For all the book's merits, however, those committed to more robust advocacy for reproductive justice will find Schlesinger's arguments troubling at turns. Specifically, staunch advocates of abortion access will likely find unsatisfying her notion of abortion as "tragic" and her preference for dialogue over conflict.

Schlesinger acknowledges that some women experience their abortions as no more morally challenging than any other legal medical procedure. She argues that the tragedy is more societal than individual: That is, the need for abortion points to something tragic in the wider social and cultural context.

The author thinks most Christians are part of a "muddled middle" on the ethics and legality of abortion.

All of this is consistent with Schlesinger's stated commitment to speaking to, and for, the "muddled middle" of Christians who are not easily categorized as "pro-choice" or "pro-life." But it represents a limitation to her stated commitment to taking seriously the experiences and moral agency of women who have had abortions.

Many women, and many transgender and nonbinary people, who have had abortions do not experience them as tragic, either personally or societally, and do not regret them. Some of them prefer confrontation about real and fundamental differences of opinion. They, too, have important perspectives to offer to Christian moral and theological reflection.

Overall, Schlesinger's writing is clear and engaging, her analysis is critical but respectful, and she includes chapter-by-chapter discussion questions, all of which make Pro-Choice and Christian well-suited to Christian book clubs and prayer groups interested in furthering their own education and dialogue on abortion.

[Kelly Stewart is a doctoral student in theological studies at Vanderbilt University, where she studies feminist and queer theory and Catholic theology.]