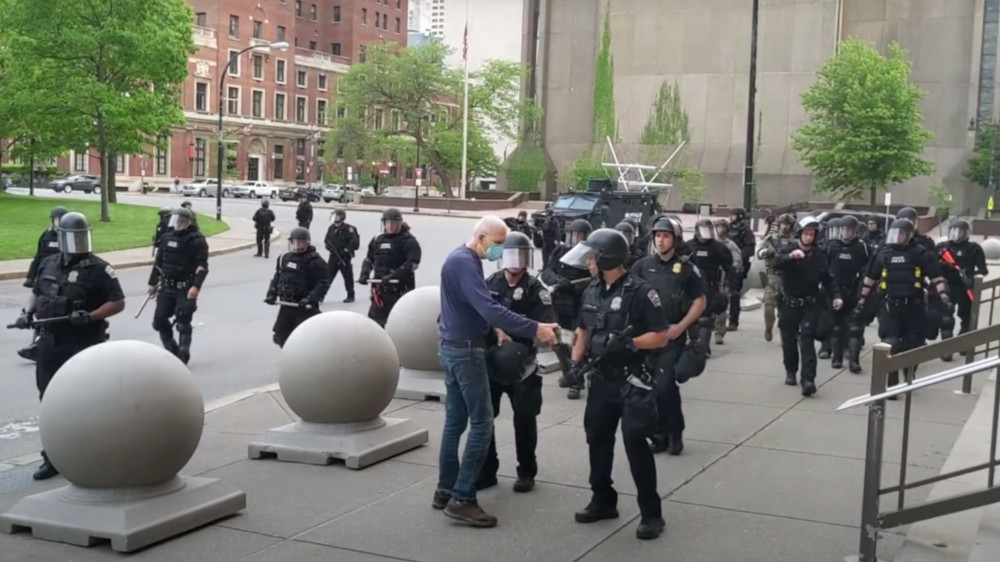 Three months after police shoved him to the ground during a protest over the death of George Floyd, Martin Gugino, the Catholic peace activist, has quietly moved back to his home in Buffalo, New York.

The 75-year-old Gugino, who ended up in intensive care after he fractured his skull and suffered a brain injury, won't discuss his condition, other than to say that he tires easily.

"The lawyers don't want me to talk about my health because they don't want the judge to say we've been trying this case in the court of public opinion," Gugino said in a phone call with RNS.

In a video of the incident that went viral, Gugino is seen approaching Buffalo police in riot gear. They push him away. He falls back, cracking his head open on the sidewalk as the police officers walk past him.

Played endlessly on social media as the nation was reeling from the death of Floyd while in police custody, the video seemed to confirm widespread suspicion of systemic police brutality — the very reason for the protest in front of Buffalo City Hall.

The two officers who appeared to shove Gugino, Robert McCabe and Aaron Torgalski, were suspended and later charged with second-degree assault.

They are scheduled to appear in court on Sept. 14.

Outrage at their suspension led to the resignations of all 57 members of the Buffalo Police Department's Emergency Response Team. Some 3,200 people signed a petition demanding the officers be reinstated.

President Trump responded to the June 4 incident in a tweet, suggesting Gugino was an "Antifa provocateur," — referring to the anti-fascist political movement. He suggested the episode was staged.

In fact, Gugino, a retired computer programmer, is a Catholic peace activist who has devoted his retirement to nonviolent protest on behalf of a range of liberal causes.

After spending nearly a month at Erie County Medical Center, Gugino moved in with his out-of-state nieces to continue his recovery.

He told Religion News Service in an interview that they were "angels" in helping him through a difficult stretch.

Now that he's back home, Gugino said he plans to continue to fight for a more peaceful, compassionate and just country.

Gugino said he believes in protesting and pointed to the clause in the First Amendment that speaks of "the right of the people peaceably to assemble, and to petition the Government for a redress of grievances."

"The government is required to listen to the complaints," he said. "But they don't. They beat you up."

Gugino said that's what he was trying to tell the officers on that fateful day outside the Buffalo City Hall when he was injured. The officers were apparently there to clear the streets before the city-imposed curfew took effect.

"To my mind, a curfew can be used for many things," Gugino said. "But suppressing dissent is not one of them."

Gugino's lawyer, Kelly Zarcone, declined to comment for this story. Asked about a civil suit against the Buffalo police, she did not reply.

Gugino has lent his voice to multiple causes, among them Black Lives Matter. He participated in protests after the 2014 killing of Tamir Rice, a 12-year-old African American boy who was shot by a police officer, and has taken an interest in other police shootings of Black men.

He is also passionate about closing Guantanamo Bay, the U.S. detention camp in Cuba where terrorism suspects could be detained without due process. Most years, he has joined members of Witness Against Torture, a group that travels to Washington, D.C., each January to fast and hold vigil outside the Department of Justice.

The group posted an appreciation of Gugino to its website, "Martin Gugino – The 'Buffalo Protester' and Our Friend," describing him as "gentle, principled, and undaunted."

Gugino has also been supportive of a group of Catholic peace activists who broke into a nuclear submarine base in Kings Bay, Georgia, in 2018 to protest nuclear weapons. The Kings Bay Plowshares 7 is expected to be sentenced next month after a court found them guilty of three felonies and a misdemeanor.

His friend, Mark Colville, who runs Amistad Catholic Worker in New Haven, Connecticut, where Gugino has volunteered, said he was encouraged by Gugino's recovery.

"I've been in the habit of not asking for medical updates unless he volunteers it," said Colville, who is also one of the members of the King's Bay Plowshares 7. "We talk a lot, and he has the same upbeat sense of humor I've always enjoyed from him."

Gugino declined to say much about himself during the interview.

Instead, he pressed his case for the right of citizens to protest the government. He mentioned the peaceful protesters who were teargassed to clear the way for Trump's photo-op outside St. John's Church as an egregious example of government overreach.

He said he will fight on because the nation's highest ideals are worth realizing.

"I live in a country with wonderful, wonderful goals. Let's do them. Let's make a real attempt to do what we are dreaming of. Let's bring the dream down to reality."