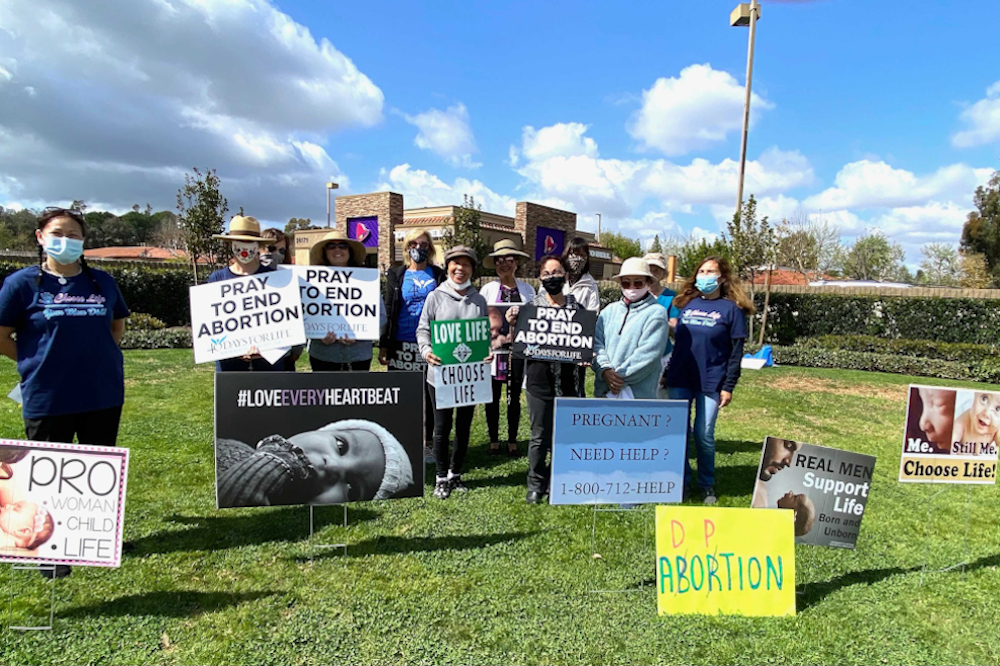 Lily Nguyen-Ellis, far left, with her fellow congregants outside a Planned Parenthood in Mission Viejo, California, where they pray for the end of abortion. (Photo courtesy of Lily Nguyen-Ellis)

About once a month, Lily Nguyen-Ellis stands outside a Planned Parenthood office in Orange County with her fellow congregants from Santiago de Compostela Church to pray for the end of abortion and for the dignity of human life from conception to natural death. She and her group hold signs declaring "#LoveEveryHeartbeat" and "Love Life Choose Life."

A cradle Catholic, Nguyen-Ellis said she strayed from the church in her late teens before finding Saddleback Community Church, a Southern Baptist megachurch led by Pastor Rick Warren. She loved the sermons, but she felt something was missing. "It was me wanting to receive Holy Communion," she said.

About 10 years ago, Nguyen-Ellis, 54, returned to practicing Catholicism, even remarrying her husband in the Catholic Church after his baptism. Nguyen-Ellis wanted to be able to receive the sacrament of the body and blood of Jesus with her husband.

On paper, Nguyen-Ellis looks like the kind of Catholic who might agree with a push by the American church's conservative bishops to deny the Eucharist to Catholic politicians, such as President Joe Biden, who support abortion rights.

But Nguyen-Ellis believes "that is for God to judge," not humans. "When I look at myself being a sinner, I'm very sure I have received Holy Communion in an unworthy manner and have offended the Lord with past actions," she said.

Just as Nguyen-Ellis has allowed Jesus, she said, "to transform me into a better person," she prays the same for Biden so he "could respect human dignity."

A Pew Research Center survey this year found that among U.S. Catholic adults, 67% say Biden should be allowed to receive Communion, while 29% say he shouldn't. Some divisions emerge among Catholics who identify with the Republican Party, with a slim majority (55%) saying Biden's abortion stance should disqualify him from receiving Communion, compared with just 11% who identify with the Democratic Party who say so.

Read this next: After Vatican warning, US bishops have limited options for planned text about Biden

The U.S. Conference of Catholic Bishops is set to discuss Communion at its annual meeting in June, following an unusual declaration after the November presidential election that the bishops would form a working group chaired by Detroit Archbishop Allen Vigneron to "navigate" the "difficult and complex situation."

On May 1, San Francisco Archbishop Salvatore Cordileone wrote in a letter that "because we are dealing with public figures and public examples of cooperation in moral evil, this correction can also take the public form of exclusion from the reception of Holy Communion."

Vatican leaders have recently criticized these efforts, saying decisions on who can receive Communion rest solely with the bishop in whose diocese the sacrament is being administered, adding that it's "misleading" to suggest abortion and euthanasia are "the only grave matters of Catholic moral and social teaching that demand the fullest level of accountability on the part of Catholics."

Abortion-rights activists in the church have criticized the debate as well. Calling abortion a morally complex issue, Catholics for Choice President Jamie L. Manson said that "even for conservative Catholics, the sacrament is powerful and should not be reduced as some sort of weapon of political intimidation or coercion."

Manson added: "Catholics are not evangelicals. We don't take things on faith. We're not a Bible-based religion. We are a faith that takes in multiple sources when we discern big ethical decisions."

Pope Francis has cautioned against drawing strict lines about who should receive Communion, writing in his apostolic letter Evangelii Gaudium that the Eucharist "is not a prize for the perfect but a powerful medicine and nourishment for the weak." In 2016, he seemed to open the question of whether divorced Catholics who remarry without a church annulment may receive the sacrament in some circumstances, currently forbidden. 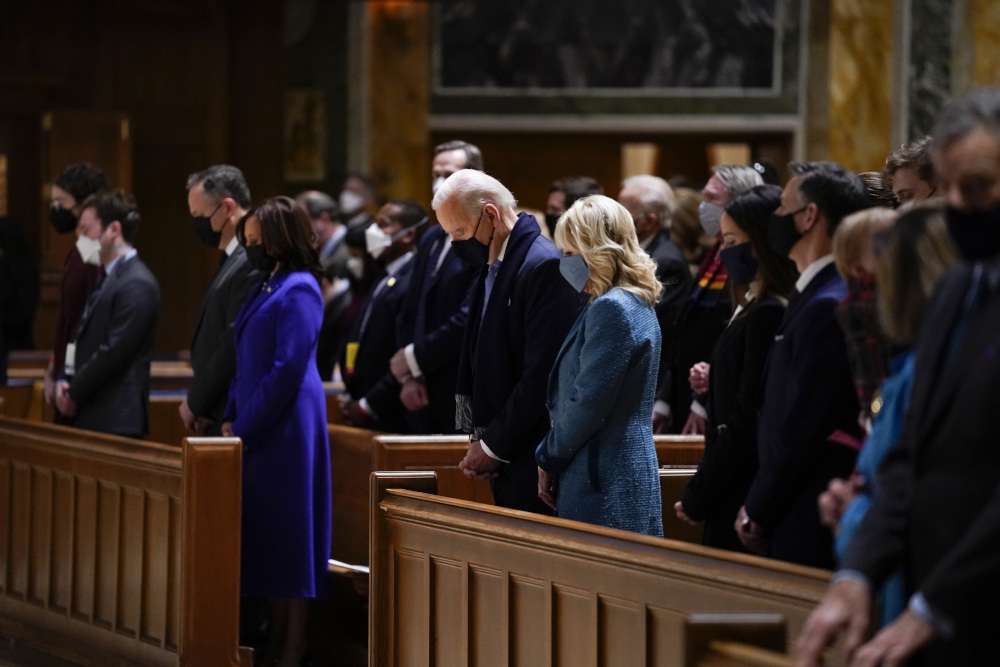 Jennifer Hughes, a religion historian at University of California Riverside, said the current debate reflects a rift "between your average Catholic and some of our very conservative Catholic leaders."

Hughes said American Catholicism has historically been more inclusive and progressive than the current leadership reflects. In practice, she said, the decision about when to receive or refrain from Communion is usually left up to individual lay Catholics. "They understand they may not be in compliance with all things, but they'll still receive (Communion) in order ... to try to enter into a relationship with God," she said.

"Communion is about participating in the body of Christ and if you deny Communion to a person or to a particular community, then in a sense you're severing them from that body," Hughes said. "You're denying them participation in that body of Christ."

Daniela Cabral, 37, of Los Angeles, doesn't consider herself a devout Catholic since she's not at Mass every Sunday. But she married in the Catholic Church and baptized her children Catholics as well. At Communion, she said, she feels closest to God.

"Sacraments are important to me so I've tried to stick to them," said Cabral, adding that her relationship with God "is just that, between me and God."

While abortion isn't something Cabral could fathom for herself, she acknowledged that she had never felt she had to make that choice, offering teen pregnancy, an abusive relationship or rape as reasons that might put someone in that position. Cabral made clear that she is not in favor of late-term abortions.

"As a Catholic, it is sad to see children being born under unhealthy situations. I believe in not only life, but quality of life," she said.

Victor Narro, a project director for the UCLA Labor Center, took his first Holy Communion in 1973 when he was 10 years old and living in New York. To this day, he cherishes his First Communion guestbook with autographs of those who attended his ceremony.

Since the pandemic hit, he has attended Sunday Mass virtually at the Cathedral of Our Lady of the Angels, led by Archbishop José Gomez and other bishops. From his computer screen, Narro raises his hand as a gesture when it's time for Communion.

Read this next: Vatican throws wet blanket on U.S. bishops who want to deny Biden Communion

Narro, who stands for abortion rights, said the church shouldn't condemn him for believing in a woman's right to choose, which he sees as a sacred act.

"I don't need a group of bishops to tell me what it means to be a devout Catholic," Narro said.

Others, such as Cecilia Chavez, 63, a parishioner at Church of the Holy Innocents in Long Beach, say that whatever people feel about the sacrament, it's up to the bishops to hold the line on church teaching. Public leaders who defend abortion rights should be denied Communion, Chavez said, adding that "it sets a bad example."

"They're being allowed, but we're being told this is wrong," she added.

Chavez, who is involved in her church's "Expectant Mothers Outreach" program, an attempt to give pregnant women alternatives to abortion, said Communion is not the only way to feel a connection to God. She asks: "Shouldn't we feel close to God when we see new life coming into the world?"