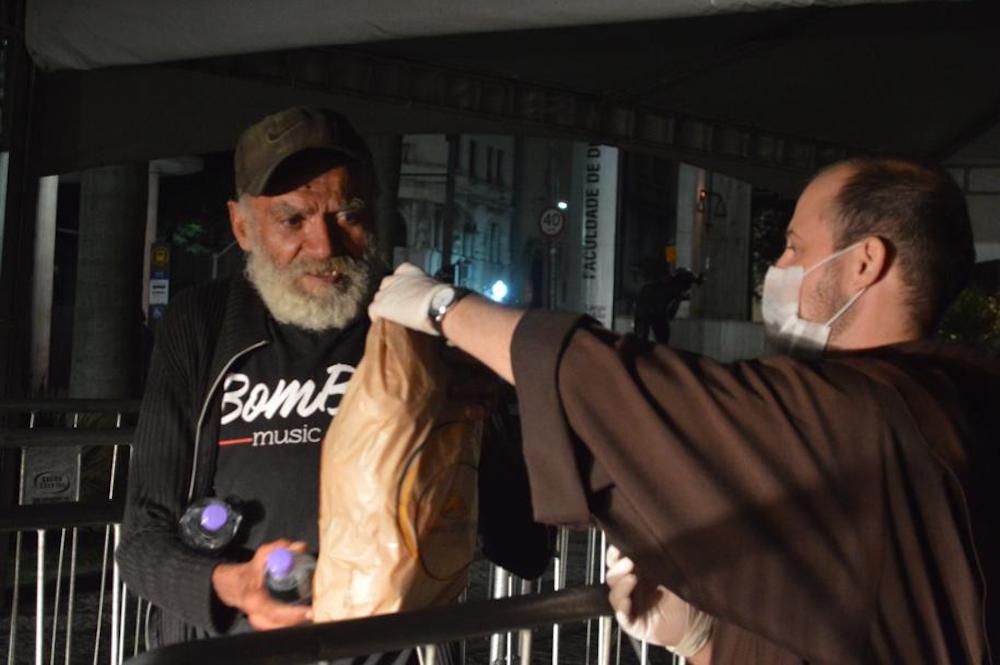 Franciscan brothers distribute meals in downtown São Paulo, Brazil, where the homeless population is estimated to be 25,000 people. (Courtesy of Diego Melo)

As many countries in Latin America enforce social distancing measures in order to contain the spread of the novel coronavirus, many are deprived of basic subsistence. From Mexico to Argentina and Chile, Catholic institutions have been pointedly active in offering support to the most disadvantaged social segments during the pandemic.

Two social groups have been strongly impacted, among others. More than half of the population in Mexico and in the Dominican Republic, for instance, work in unregistered menial jobs, street vending and other precarious activities — without governmental protection or labor rights. With the establishment of partial or full quarantines, those people saw their income suddenly disappear.

Large Latin American cities, such as Mexico City, São Paulo, and Santiago, moreover, have big homeless populations, numbering in the tens of thousands. With the outbreak, most governmental shelters ceased to receive new members. The assistance provided by non-governmental organizations and religious groups, in many cases, has been suspended.

Catholic congregations and diocesan pastoral commissions that already worked to help strengthened their operations, thus attending the decades-old motto of the Latin American Church, which professes a "preferential option for the poor."

That's the case of the Franciscans in São Paulo, the biggest city in Brazil. With a homeless population estimated at 25,000 people, the city left part of that contingent largely unassisted when a partial lockdown was declared on March 24.

"The homeless population is much marginalized now. Many groups that used to distribute food among them left the streets out of fear of the disease," Fr. Diego Melo told the NCR. The Franciscans already had different food programs directed to poor communities and homeless people in São Paulo, Rio de Janeiro, Curitiba, and in Espírito Santo State. "We realized the new situation required a reconfiguration of our work and we did so," he said. 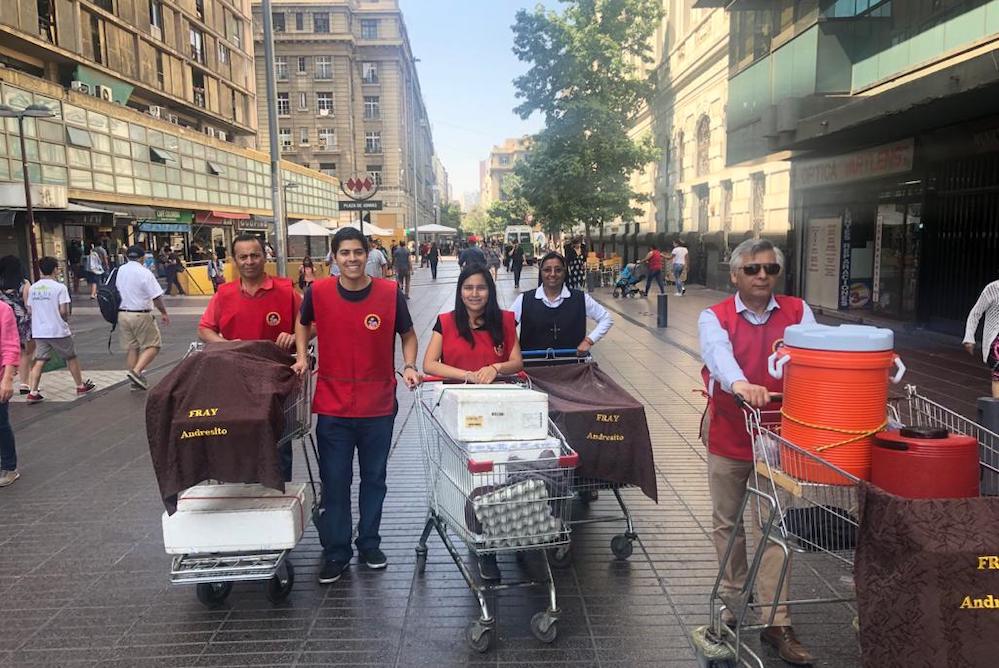 Chilean Franciscan Missionary Sisters of Jesus and volunteers take food to share with homeless people and to street sweepers in Santiago, Chile, who are having a more difficult time than usual as services are closed because of the coronavirus. (Courtesy of Patricia Baez)

In all those regions, the congregation deployed new brothers and volunteers to the work on the streets, gathering and distributing food and supplies. In São Paulo, the Franciscans set up a tent in front of one of its downtown houses and started to serve at least 2,500 hot meals each day.

The Franciscans, along with the Catholic community Missão Belém, are one of the few groups currently working in that area, which concentrates a great part of São Paulo's homeless population. "Even other religious groups are giving us food to serve, because they fear contagion," Melo said.

All precaution measures are being taken by the congregation. Melo said he doesn't fear contamination. "My biggest fear is to see our brothers and sisters starving and without any assistance." 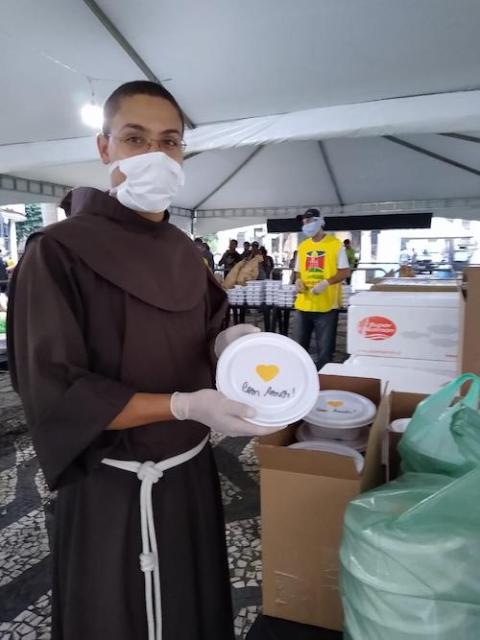 Franciscans set up a tent in front of one of the congregation's downtown houses in São Paulo, Brazil, and serve at least 2,500 hot meals each day. (Courtesy of Diego Melo)

A similar dynamic takes place in Santiago, in Chile. Since the pandemic reached the country, homeless people have been complaining of insufficient assistance, Sr. Patricia Baez told NCR.

"Everyone talk about how it's important to help the neediest in society in a moment like that, but most people are closed at home now. The homeless population is completely invisible at this moment," she said. "I can't be calm at home if I know that my brothers and sisters don't have food."

A member of the Chilean Franciscan Missionary Sisters of Jesus, Baez and a group of four colleagues and volunteers leave every night at 7 p.m. to distribute about 80 hot meals among homeless people. At 10 p.m. they have to be back at home, due to a sanitary curfew established by the government. "Our Via Crucis on Good Friday was spent like that," she said.

Most refectories for homeless people are now closed, she said. "The other day, a homeless woman told me she isn't afraid of COVID-19. 'I have been beaten and raped on the streets. God will protect me from this disease,' she told me. There's much suffering," Baez said.

The poor in big Argentinian cities as Buenos Aires are benefiting from a decades-old activity of social movements and church organizations in the country, which have been reinforcing their operations since the pandemic started. According to Bishop Gustavo Carrara, community refectories have added new shifts to their regular schedules, in order to deal with the bigger demand and avoid overcrowding.

"Social distancing measures have been applied in Argentina at an early phase, which contributed to prevent the further spread of the virus. But this caused an impairment in the informal economy, so there's a growing demand for food," Carrara told NCR.

In slums, Hogar de Cristo (Home of Christ, in Spanish), a network of neighborhood centers that give shelter to children and teenagers involved with drugs, is protecting hundreds of them during quarantine.

For the homeless, a number of refectories still provide hot meals. Catholic organizations such as Caritas Argentina are giving permanent shelter to people who used to only spend the night. "In Buenos Aires, two Caritas shelters are hosting 370 people. Sisterhoods are also offering a place to stay for the homeless," added Carrara.

The Argentinian church has been helping the state to reach the most vulnerable people — residents of regions with difficult access and no internet — in order to facilitate the donation of food and money. "Even in the most faraway places there's always a chapel," said Carrara.

In Santo Domingo, in the Dominican Republic, the church has also been helping the government to organize assistance. Hunger is a growing problem in the Caribbean country. "Recently, I met an elderly woman who told me she was at home with four grandchildren and that they hadn't eaten for four days," Fr. Domingo Legua, episcopal vicar of social pastoral care in the Archdiocese of Santo Domingo, told NCR.

Legua explained that at least half of the Dominican population doesn't have conditions to stock on food. "They work each day in order to buy each day's food. Now that everybody is confined, those people are starving," he said.

Legua's food bank has daily distributed thousands of portions of uncooked staple foods — mainly rice and beans — since the pandemic reached the island. "Only in the first t 10 days of confinement, we donated 500,000 portions," he affirmed. The food bank receives contributions from local businessmen and buys supplies directly from producers. 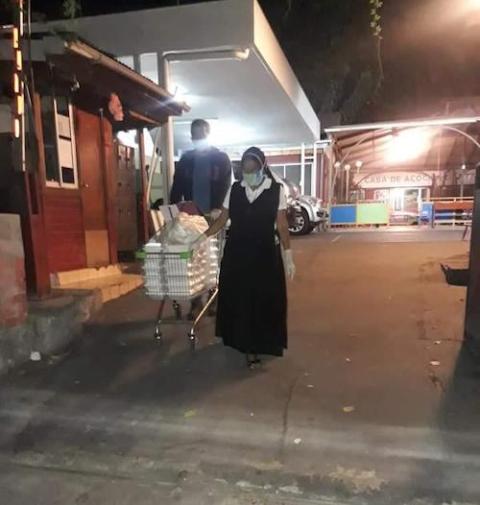 A Chilean Franciscan Missionary Sister of Jesus is one of a group of four colleagues and volunteers who leave every night at 7 p.m. to distribute about 80 hot meals among homeless people in Santiago, Chile. At 10 p.m. they have to be back at home, due to the government curfew during coronavirus. (Courtesy of Patricia Baez)

The economic crisis generated by the social distancing measures has immediately increased criminality in the country, which impacted even the church charitable activities. "We had a storehouse where we used to gather food donations in a distant neighborhood. It was robbed several times and we had to leave the place," Legua said. "More difficulties are coming."

In Mexico, the church has launched an effort to coordinate the several assistance initiatives taking place in the country. With an economic informality rate of 56%, the country has poverty pockets in the cities and in the countryside, which present healthcare, nutrition and psychosocial needs.

"We've been trying to coordinate our works in the nine Mexican regions where we're present, in order to help poor people in urban and rural areas," Fr. Sergio Cobo, director of the Society of Jesus' Loyola Foundation, told NCR. "We've been giving assistance to hundreds of thousands of people this way."

The Mexican Jesuits are giving support to the professionals of Catholic hospitals in the country and gathering donations to be distributed to parishes and communities. Some of their buildings have been converted to healthcare and social service operations.

According to Cobo, there's also a relevant Jesuit presence among indigenous communities. "Through two radio stations we maintain with indigenous groups, we've been bringing information and raising awareness on the novel coronavirus both in Spanish and in indigenous languages," he affirmed.

Beyond the most visible face of the crisis, there's a political layer determining the course of the events in Latin America — and the church can't neglect such aspects, argued Melo, from Brazil.

"Our preferential option for the poor compels us to accompany them in this moment of emergency, but our work can't be limited to that. Our faith leads us to recognize the need for structural changes in a social system that keeps generating poverty," he said.

[Eduardo Campos Lima holds a degree in journalism and is currently a Ph.D. candidate at the University of São Paulo, Brazil. Between 2016 and 2017, he was a Fulbright visiting research student at Columbia University. He has written for major news outlets, such as Reuters and the Brazilian newspaper Folha de S. Paulo.]

Read this next: Mexican bishops announce 'families without hunger' plan during pandemic
This story appears in the Coronavirus feature series. View the full series.