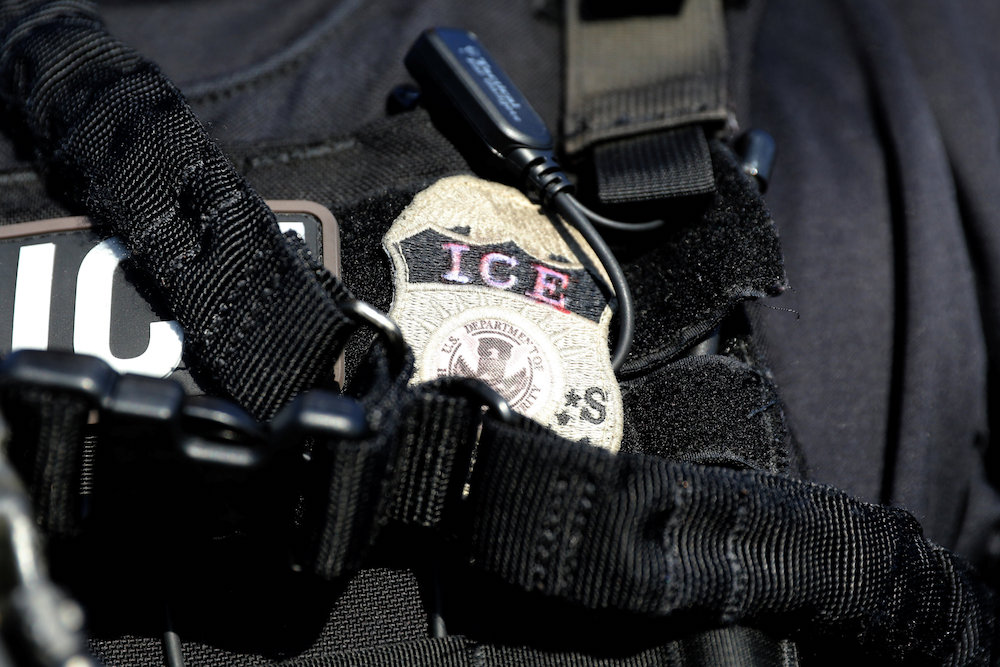 The badge of an U.S. Immigration and Customs Enforcement officer is seen in Santa Ana, California, May 11, 2017. (CNS/ Reuters/Lucy Nicholson)

A Chaldean Christian immigrant who was deported from Michigan to Iraq has reportedly died because he was unable to obtain insulin to treat his diabetes, drawing fire from critics of the Trump administration who charge that the death is a result of disregard for the well-being of deportees.

According to the American Civil Liberties Union, the man, Jimmy Aldaoud, was deported in June even though he had not lived in Iraq since he was an infant and didn't speak Arabic.

Officials said that when he was less than a year old, his parents fled to Greece, where they applied for refugee status in the U.S. The status was granted, and Aldaoud was raised in the United States, where he struggled with both diabetes and mental health issues.

On Aug. 7, Michigan state Rep. Mari Manoogian posted a video that she said was Aldaoud, 41, describing his dire situation roughly two weeks after he was deported.

"I begged them — I said, 'Please, I've never seen that country," Aldaoud says in the clip, referring to immigration officials. "However, they forced me. … I'm here now. I don't understand the language. I was sleeping in the street. I'm diabetic — I take insulin shots. I've been throwing up. … Trying to find something to eat."

According to Politico, Edward Bajoka, an immigration attorney who says he is close to Aldaoud's family, published a Facebook post on Wednesday in which he claimed Aldaoud's death was connected to inability to obtain insulin in Baghdad.

Aldaoud, who bore what appeared to be a cross tattoo on his arm, belonged to the ancient subset of Catholicism called Chaldeans, whose historic homeland stretches from Turkey and Georgia into northern Iraq and Jordan.

Shortly after President Donald Trump issued his controversial travel ban in 2017, Immigration and Customs Enforcement detained hundreds of Iraqis in and around Detroit, many of them Chaldeans. While approximately 800 of the roughly 1,400 Iraqis with final orders of removal have criminal records (Aldaoud's record included disorderly conduct and larceny of a minor vehicle), many of the infractions were minor or years old. Hundreds have no criminal history at all.

The ACLU successfully stymied initial efforts to deport the detainees, and several have won their immigration cases. Lawyers and advocates argued that Chaldeans who returned to Iraq risked torture and death at the hands of groups such as ISIS and that deporting them amounted to a "death sentence."

But the ACLU ultimately lost its class-action lawsuit, and while it is mulling appealing the case to the Supreme Court, Chaldeans have been deported in the meantime.

Miriam Aukerman, a senior staff attorney with the Michigan ACLU and one of the lawyers challenging the Trump administration's attempts to deport Iraqis, expressed dismay over Aldaoud's death.

"Jimmy's death has devastated his family and us," Aukerman said in a statement. "We knew he would not survive if deported. What we don't know is how many more people ICE will send to their deaths."

Martin Manna, president of the Chaldean Community Foundation, called Aldaoud's death "heartbreaking." Manna said he had spoken with Aldaoud's family and was working with officials in the United States and in Iraq to return his body back to Michigan for a funeral.

"There's a lot of anger in the community," Manna told Religion News Service. "We've had several discussions with the administration. We think now they'll understand that this is life or death for people. We hope the president takes action like we've been requesting for some time."

He pushed back on the notion that deporting Aldaoud to Iraq was appropriate given his criminal record.

"He struggled, but this is no way to treat anybody," Manna said. "There are clearly laws that say you can't deport people to a country that can put people in harm's way. Here we are deporting an individual that had a mental illness to a country where he had no family."

He added: "The U.S. bears some responsibility for his death."

Manna pointed to legislation championed by U.S. Rep. Andy Levin, D-Mich., that would pause deportations for Iraqi nationals with orders of deportation for two years to allow time for them to have their cases heard individually in immigration court. The bill, titled the Deferred Removal for Iraqi Nationals Including Minorities Act, introduced by Levin and Rep. John Moolenaar (R-Mich) remains in committee.

"[Aldaoud's] death could have and should have been prevented, as his deportation was essentially a death sentence," Levin said in a news release. "My Republican colleagues and I have repeatedly called on the Executive Branch to cease deportation of such vulnerable people. Now, someone has died. We cannot wait one more day for action."

Chaldean Christians have also called for the Trump administration to address the downturn in refugee admissions for Christians and other persecuted religious minorities since the president took office — this despite Trump's pledge in a 2017 interview to make the plight of persecuted Christians a "priority."