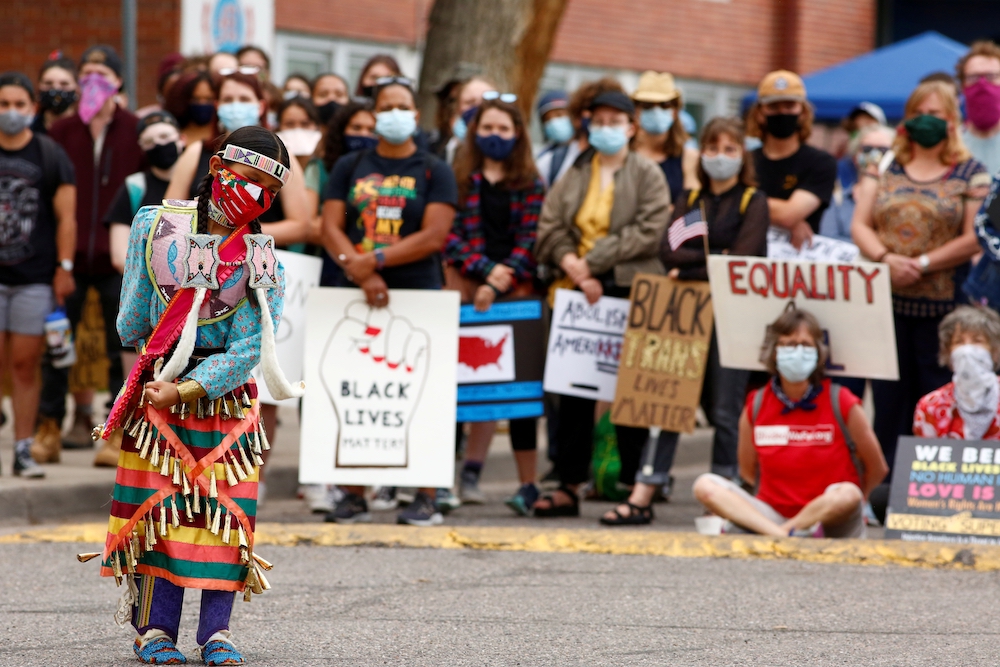 An indigenous girl in Denver dances in traditional dress July 4 during a march that called on Black, indigenous and Latino communities to rise up against oppression. (CNS/Reuters/Kevin Mohatt)

To begin the process of restorative justice, the Catholic Church and individual religious orders must reckon with their histories of enslaving Black people and forcing Indigenous peoples into missions and abusive boarding schools, speakers said at a three-day conference sponsored by Catholic Mobilizing Network.

GU272 represents descendants of the 272 enslaved Black people sold by the Jesuits at Georgetown University in 1838. The New York Times reported in 2016 that the Jesuits who ran the university sold men, women and children to plantations in the Deep South, raising a total of about $3.3 million in today's money. One child they sold was just 2 months old.

Today, over 10,000 people can trace their roots back to one of the enslaved people Georgetown sold, Branche said. 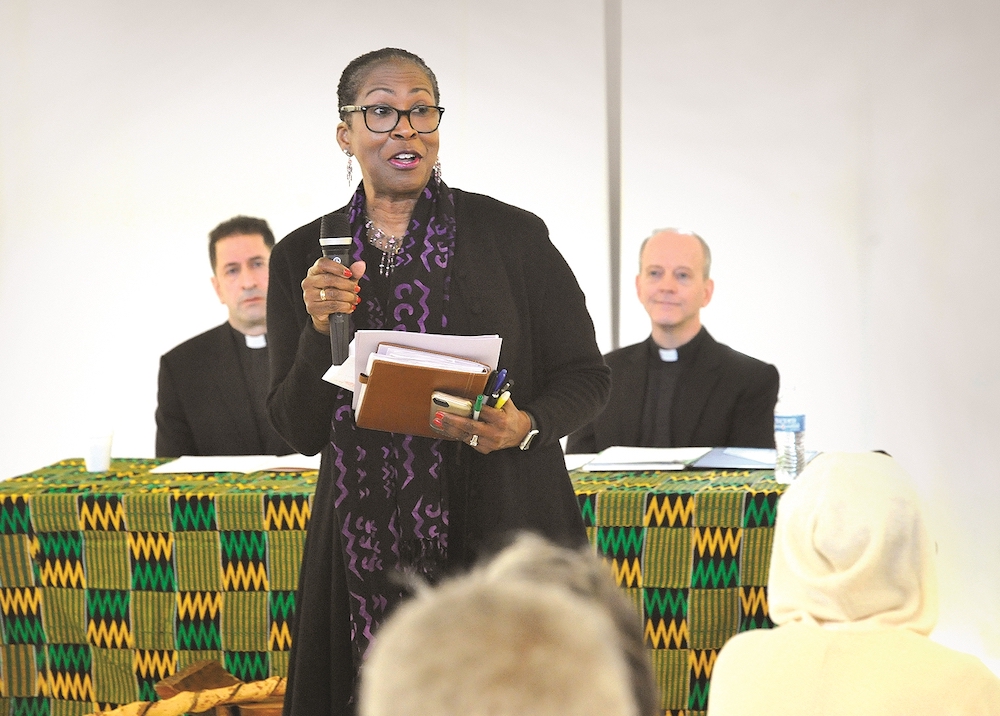 Cheryllyn Branche, vice president of the GU272 Descendants Association, speaks at a listening session Dec. 9, 2017, for descendants of 272 enslaved persons sold to a Louisiana plantation owner by the Jesuits of Georgetown University in 1838. At left is Jesuit Fr. Tim Kesicki, president of the Jesuit Conference of Canada and the United States, and at right is Jesuit Fr. Bob Hussey, provincial of the Jesuits' Maryland Province. (CNS/Clarion Herald/Peter Finney Jr.)

Georgetown and the Jesuits aren't the only Catholic institutions with an ugly history in the Americas.

Another speaker at the Oct. 31 panel, Sr. Bridget Bearss, a Religious of the Sacred Heart, spoke of how her congregation had enslaved Black people in Missouri and Louisiana from 1818 until the Civil War.

Enslaved people made bricks and constructed the houses sisters lived in, washed their clothes and tended their gardens.

But until recently, this wasn't part of the origin story Bearss told her students when talking about her congregation.

She said it's taken a lot of work for her and other sisters in her community to truly listen both to descendants of the people her congregation enslaved, and to her own Black students about ways that they had been harmed by the congregation's racism.

"It's sometimes easier to run from the truth than to face it," Bearss said. "Our journey as a congregation is to listen to the truth, and to sit in the middle of a circle of unknowing." 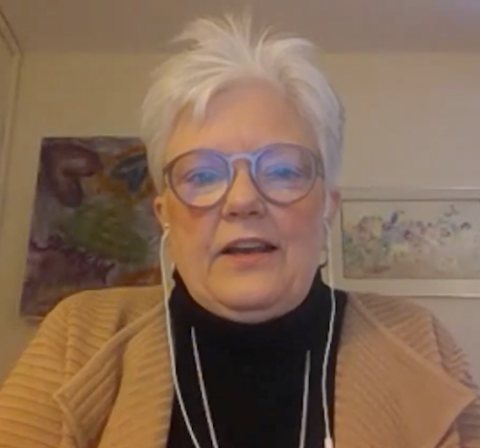 Sr. Bridget Bearss speaks during an Oct. 31 panel at a conference on restorative justice hosted by the Catholic Mobilizing Network (NCR Screenshot)

The church also needs to confront its involvement in the decades-long process of forcibly sending Indigenous children in Canada and the United States to boarding schools where they were prohibited from speaking their native languages and compelled to cut their hair and adopt other aspects of settler culture, said speaker Maka Akan Najin Black Elk.

The governing concept of these schools was to "kill the Indian, save the man," said Black Elk, executive director for truth and healing at Red Cloud Indian School in Pine Ridge, South Dakota, which is a Jesuit K-12 school on the Pine Ridge Indian Reservation, where Black Elk grew up.

"This legacy is still relevant today," said Black Elk, who is Oglala Lakota. "This boarding school history encompasses generations of Native American children who were forcefully removed from their home and taken to these schools … that sought to erase and make them ashamed of who they were."

The boarding school in his community didn't close until the 1980s, Black Elk said. Children who were raised in these environments were deprived of their families' love and care, and they were often subjected to physical and sexual abuse, he said. This trauma has carried down through generations in some families.

The Catholic Church was one of the largest individual religious groups with a hand in creating these schools, he said. The boarding school in Black Elk's own community was started by the Jesuits. The legacy of these schools has fundamentally broken the relationship between the church and Indigenous people in Black Elk's community.

"This is really beyond apology," he said.

Some Jesuits he's spoken to rush to litigate the exact details of what happened, rather than listening to survivors and their families with an open mind, Black Elk said. 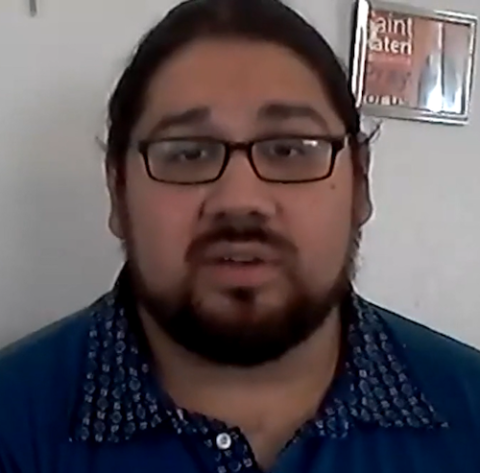 Yet the legacy of boarding schools — generational trauma and cultural loss in Indigenous families and communities — is still very "raw and real." Some survivors of boarding schools still are not able to talk about what they experienced because of how painful it is, Black Elk said.

Boarding schools aren't the only way the church participated in violently colonizing North America, according to Deacon Andy Orosco of the Diocese of San Bernardino, California.

Orosco, speaking in a panel on Oct. 29, said Indigenous communities in his diocese have long struggled with the legacy of the missions, which were set up by Catholic missionaries from Spain in the late 1700s and early 1800s to convert Indigenous people and force them to assimilate to Spanish ways of life. Native people who worked on the missions were not allowed to speak their languages and were stripped of their cultures, Orosco said.

"Imagine losing your ... languages that show who you are as a people," he said. "Well, that's what happened to us. It's a complex subject — there are a lot of hurts."

In addition, the missions helped settlers and the Catholic Church take land from Indigenous peoples — land that largely has not been returned, according to the Smithsonian Magazine.

The legacies of boarding schools and missions have deeply damaged the church's relationship with Indigenous peoples, said Black Elk during the Oct. 29 panel.

"I sometimes get asked the question, quite explicitly — 'How can you be Indigenous and a Catholic?'" he said. "And I think it's a fair question, given the violent history that the Catholic church played a role in, in terms of the colonization of the Americas."

And most Catholics aren't even aware of this history at all. In order to heal the wounds — past and present — the church needs to start with honesty, he said.

"The conversation starts, of course, with truth-telling," Black Elk said in the Oct. 31 panel. "We have not as an institution addressed this history before in any significant way."

Click the arrows below to view a slideshow of three images:

Beyond truth-telling, Bearss said the church, religious orders and their members need to recognize their own complicity in these harms and their reverberating effects in the present. Then they need to act to redress those harms.

Her community, for instance, has started a committee on slavery, accountability and reconciliation, has held ceremonies with descendants to commemorate those who were enslaved, and has begun working to root out racist attitudes and behaviors within the community itself.

It has also established a scholarship fund for Black students in Louisiana.

Branche said she and other descendants of the enslaved people sold by Georgetown want to see the university create a $1 billion foundation for education and other necessities for descendants. So far, Georgetown has agreed to raise about $400,000 per year to support the descendants, according to The New York Times.

But Branche, a seventh-generation Catholic and retired principal at a Catholic school in New Orleans, said one of the most important moments of her advocacy work came when she spoke with Jesuit Fr. Tim Kesicki in 2017.

Kesicki, who is president of the Jesuit Conference of Canada and the United States, offered her a heartfelt apology on behalf of the Jesuits for what they had done to her ancestor and other enslaved people. She said, tearing up slightly, that he looked her in the eyes and told her what had happened was "such a great sin."

"From when God knits us in the womb of our parents, he has a plan for us," she said. "The plan is for us to move forward with healing, with reconciliation, for all people who have been dehumanized, brutalized, who have felt the inhumanity of others. And how we move is to move together."

Read this next: Boarding schools: A black hole of Native American history

Editor's Note: A previous version of this story misspelled the name of Jesuit Fr. Tim Kesicki.