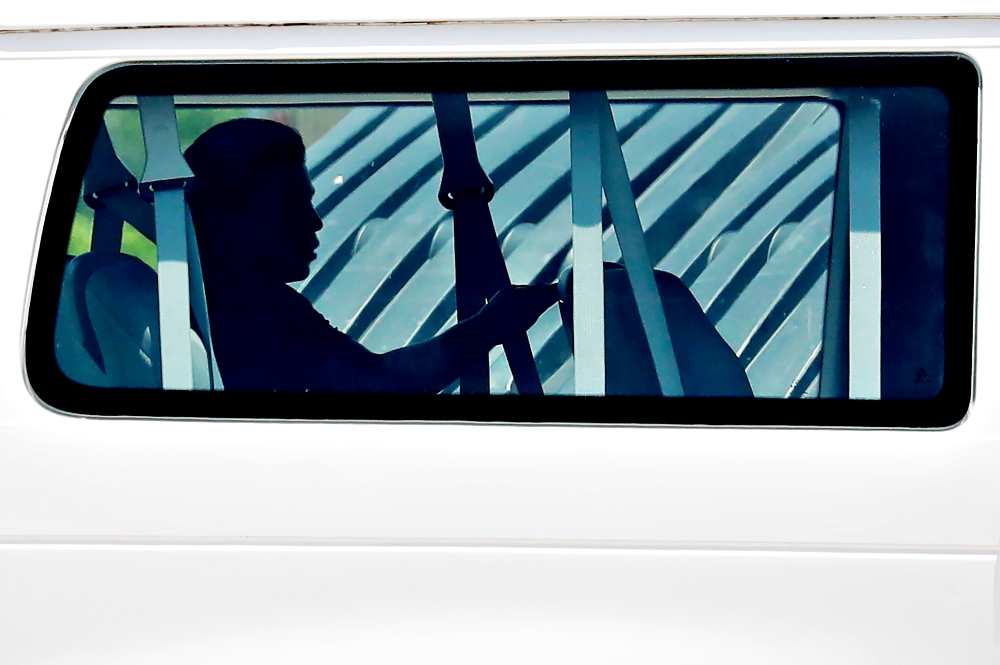 A minor sits in the back of a van July 11 as he is transported into Casa Esperanza, a federally contracted shelter in Brownsville, Texas. (CNS/Reuters/Carlos Barria)

The court-ordered July 26 deadline to reunite families separated at the border has passed, but more than 400 children remain thousands of miles apart from parents who were deported before having their children returned to them.

The government has shown reluctance to locate deported parents, and civil society groups with international connections are stepping in to find the parents and offer legal assistance.

"There's this kind of general attitude that if you've sent someone home, you've silenced them," said Cathleen Caron, founder and executive director of Justice in Motion. "They're not gone. They have a voice and they have rights and they're humans and it really doesn't matter they're back in the home country because justice doesn't stop at the border."

In plans submitted to U.S. District Judge Dana Sabraw Aug. 2, the Department of Justice said that a group of advocates led by the American Civil Liberties Union (ACLU) should use their resources and government information to find deported parents, while the ACLU insisted the government bore the responsibility for creating the crisis and "has far more resources than any group of NGOs."

In an Aug. 3 conference call, Sabraw rejected the government's plan, saying that separated families are "100 percent the responsibility of the administration" and that he would order the government to name a leader of reunification efforts.

Caron had told NCR two days before the call, "There hasn't been any tangible effort for the government to find the deported parents. It's all been civil society."

Justice in Motion is one civil society group that has been searching for parents. Caron founded the organization in 2005 to help migrant workers continue to pursue legal cases related to employment abuses in the U.S. after returning to their home countries. More recently, they have expanded into civil rights cases for returned migrants related to arrest, detention and deportation; this prepared them to react to the family separation crisis.

The government fell far short of 100 percent prosecution, and chose not to refer thousands of adults without children, according to a July 24 report from the Transactional Records Access Clearinghouse (TRAC), which analyses government data. But the policy led to thousands of parents being referred for prosecution and separated from their children, who couldn't be detained with them in criminal custody.

Widespread family separation ended June 20 with an executive order from President Donald Trump. On June 26, Sabraw ordered that children 5 years old and younger be reunited with their parents within 14 days and all others be reunited within 30 days.

"There's a lot of emphasis that's being put on whether the government met the deadline," said Ashley Feasley, director of policy for the U.S. bishops' Migration and Refugee Services office. More important "are the families that need to be put back together and the families that have been reunified and released and have huge social and legal service needs. ... We and the larger NGO community are working to help provide those services."

Although the government reunited the majority of families by the deadline, it classified hundreds as "ineligible." For 463 of the 711 children who fell in this category, the reason was that their parents were outside the U.S.

While no one anticipated the family separation crisis, Justice in Motion's international connections made it one of the nonprofits best positioned to help families with deported parents. It had already trained a "defender network" of 44 human rights organizations, including several Catholic groups, in Mexico, Guatemala, El Salvador, Honduras and Nicaragua.

"There hasn't been any tangible effort for the government to find the deported parents. It's all been civil society."

Beginning with the nine "defenders" that were already focused on civil rights, but planning to include additional defenders, Justice in Motion is helping to locate separated families. Defenders can use their knowledge of local communities to track down deported parents and see if they need assistance.

Justice in Motion is also working with the Catholic Church and community radio stations — many of them also run by the church — to put out general announcements that help is available.

The defenders are trained in U.S. immigration and civil law and provided screening questions to see what kind of claim a parent might be able to pursue. They can help connect people to U.S. legal aid through Justice in Motion, then provide continuing help with pursuing a court case from a foreign country, such as gathering information or submitting official testimony.

The legality of deporting parents without their children is unclear because "this is not normal practice on the part of" the Department of Homeland Security, said Sarah Bronstein, a senior attorney at the Catholic Legal Immigration Network (CLINIC). "It's not like there's case law on this issue or that there's legal precedent."

Some deported parents might prefer for children to remain separated from them in foster homes or in the care of relatives in the U.S. while they pursue legal status if the alternative is for them to be sent back to a dangerous country, both Bronstein and Caron said.

Other families might want to be reunited, even if that means simply having the child sent to join them in their home country. While officials have said parents that were deported agreed to leave children behind, Caron worried some families may have been misinformed or been denied due process.

An added complication is that once children's cases are separated, their lawyers are supposed to pursue the child's interest, Bronstein says, which might not be deportation for the sake of reunification. It's also unclear what should happen when children's desires conflict with what their parents want for them.

But if advocates can track down deported parents they can at least make sure parents can get in touch with their children and "make decisions about their children's welfare and well-being," said Feasley.

Migration and Refugee Services has been focused on facilitating reunification of families that are still in the U.S., providing basic services and help with transportation for migrants who have just been released and connecting them with social services and legal information.

But the bishops' Migration and Refugee Services is also concerned about children who are still in Office of Refugee Resettlement custody because their parents have been deported, Feasley said. Migration and Refugee Services is working with partners in Latin America such as Catholic Relief Services, the Sisters of Mercy and the Scalabrinians to share information and start connecting parents and children.

Other civil society organizations such as Kids in Need of Defense (KIND), Al Otro Lado and the Women's Refugee Commission are also involved in efforts to find parents.

So far, Justice in Motion has tracked down six parents, leading one girl to be sent back to her family in Guatemala. Although this represents a small percentage of the families that need to be reunited, Caron is confident that family reunification is "just a matter of time."

"But the harm that's done can't be undone," she added. Even if families eventually win lawsuits for emotional harm, "it's not going to correct what never should have happened. It's not going to make up for that. It really is a tragedy of our times."