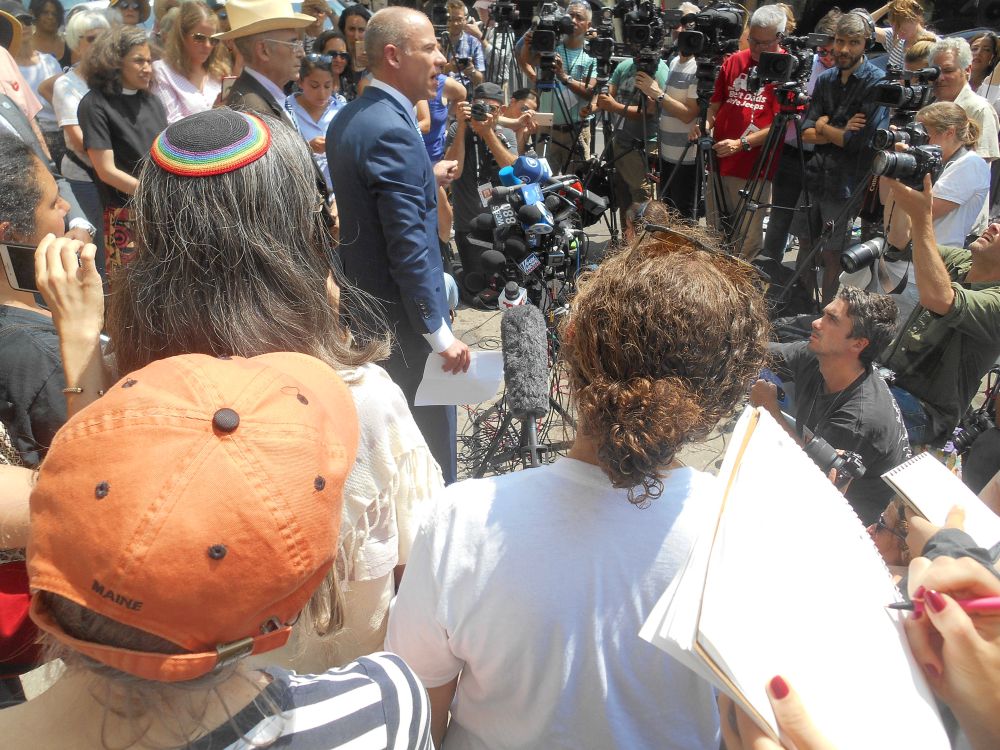 Beneath the rumble of passing commuter trains, the New Sanctuary Coalition, an immigrants' rights group, held a press conference outside the Cayuga House for Children in East Harlem July 11. Scores of media representatives spilled over the sidewalk ready to hear the story of Hector, a Honduran immigrant with two daughters living at the Cayuga House. The daughters were sent to New York as a result of the Trump administration's zero-tolerance policy.

Hector was unable to gain permission from Immigration and Customs Enforcement (ICE) to travel from Texas, where he is being monitored via an electronic ankle bracelet after formally seeking asylum when he arrived in the U.S. in January. Hector made the asylum claim that his family, including his wife and three daughters ages 14, 9 and 5, needed to leave Honduras to escape gang violence.

The family, identified only by first names, has been split apart. Hector arrived in the U.S. with his oldest daughter, who remains with him in Texas. His wife, Denise, came to the country in June with their other two daughters, after the implementation of the zero-tolerance policy. Denise was detained in Texas while the couple's two younger daughters were sent to New York via bus.

Hector's non-appearance proved a backdrop to the press conference, as political and religious representatives blasted the Trump administration policies. They described the refusal to allow Hector to come to New York to speak and meet with his daughters as another indication of the government's continuing callousness towards immigrant families.

"Jesus was a refugee," said New York Assemblyman Michael Blake, a Democrat representing the Bronx. He said that as an elected official, he has been turned away from childcare facilities in his district that are being used to house the separated children.

"They have no plan to bring these families together," he said, noting that the federal government has been unable to unite all the separated families despite an order from U.S. District Judge Dana Sabraw, based in San Diego.

Other speakers at the press conference cited the wide-ranging religious support for the migrant families, including representatives of Jews, Christians and Muslims. The Sisters of Charity of New York were also listed as a supporting group, but no representative of the archdiocese spoke. Speakers also called for the abolition of ICE.

Among those addressing the press was Michael Avenatti, an attorney and regular fixture on television news programs. Avenatti is representing Denise and her two younger daughters, who he visited after speaking to the press.

As he does regularly on television cable news, Avenatti was in full attack mode against President Donald Trump.

"For months, this cruel and unusual president has been holding families hostage in the cause of politics," he said. Hector is one of those victims, said Avenatti.

He urged white males, who voted in large numbers for Trump, to reject the policies separating children from their parents. He said that the success of the Trump administration depends upon "convincing people who look like me that their continued success" depends upon a harsh immigration policy. White men, he said, need to learn "that these are our people, too."

It was only a week ago, said Avenatti, that the parents, Hector and Denise, were told the whereabouts of their two youngest children. He said that the girls are among 600 children under the care at the Cayuga House for Children with plans to expand to housing 900 children. Many are now in foster care. Most apparently made the trip to New York via bus from Texas.

"The administration stripped them [immigrant parents] of their children with no plan," said Avenatti.