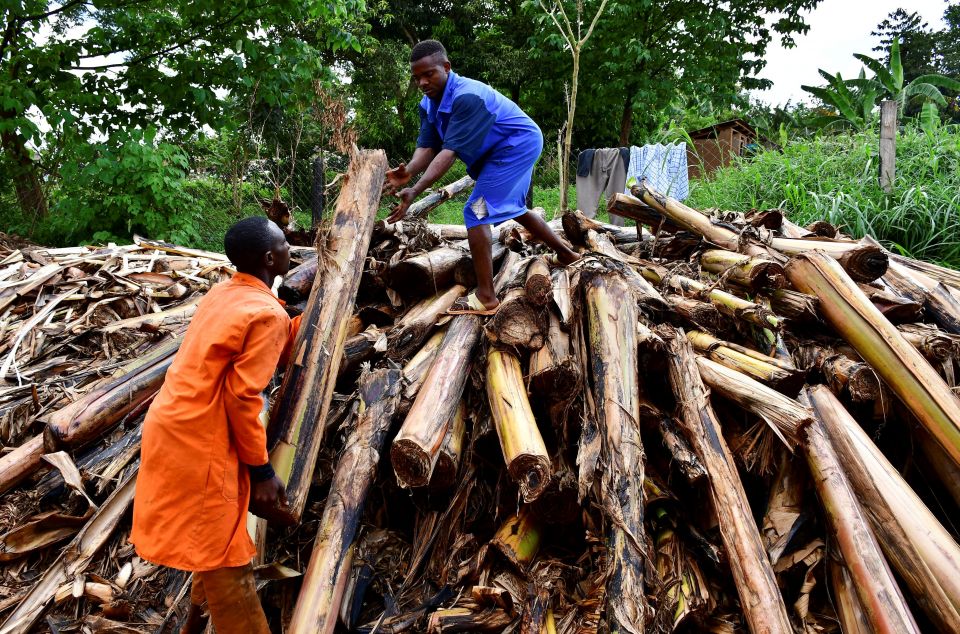 Workers sort freshly cut banana stems at a plantation for fibre extraction from the sheaths of trunks in Mukono, Uganda, April 3, 2021. After decades of British colonization, Uganda is one of the poorest countries in the world. (CNS/Reuters/Abubaker Lubowa)

Cleveland — Recent decisions by leading financial institutions and the world's leading economies to ease the debt burden of the world's poorest nations will help those countries respond to the economic crisis caused by the coronavirus pandemic, the executive director of Jubilee USA said.

The decisions were reached during April meetings of the Group of 20 nations, or G-20, the World Bank Group and the International Monetary Fund.

"We've made some real progress," said Eric LeCompte, who heads the alliance of faith-based development and debt relief advocacy organizations and has long advocated for financial reforms affecting the world's 73 poorest nations and dozens of other middle-income countries.

"The steps will allow countries to respond to the pandemic and other needs," LeCompte told Catholic News Service April 15. "At the same time, with how serious the crisis is, we recognize we need to do a lot more and in some ways move quickly."

Atop Jubliee USA's priority list was the creation of $650 billion in emergency reserve funds, known as Special Drawing Rights, or SDRs. He described the size of the fund package as the "biggest ever mobilization of such reserves."

It includes more than $200 billion for developing countries, with about 10% of the funds being available to the poorest nations. LeCompte said his organization is working the with IMF on a process to transfer an additional $400 billion to developing countries, which have seen some of the most serious economic consequences from the spread of COVID-19.

The IMF also canceled debt service payments for the poorest countries into October.

LeCompte said the meetings saw the United States and the IMF support a minimum corporate tax and digital taxes that will help developing countries raise significant revenues for their pandemic response.

The U.S. support was particularly vital because of its influence at the IMF and among the G-20.

Jubilee USA, Bishop David J. Malloy of Rockford, Illinois, chairman of the U.S. bishops' Committee on International Justice and Peace, and Archbishop Roberto Gonzalez Nieves of San Juan, Puerto Rico, were among those who met with Treasury Secretary Janet Yellen March 16 to press for the policies approved during the virtual meetings April 5-11.

Pope Francis also urged action on behalf of poor and developing countries in a message to the World Bank Group and IMF as they met.

He said that despite "our deeply held convictions that all men and women are created equal, many of our brothers and sisters in the human family, especially those at the margins of society, are effectively excluded from the financial world."

"If we are to come out of this situation as a better, more humane and solidary world, new and creative forms of social, political and economic participation must be devised, sensitive to the voice of the poor and committed to including them in the building of our common future," the pope said.

LeCompte echoed similar concerns, saying that he and others are troubled that "a few wealthy countries are going to have recovery" while "the majority of the world is not going to be having recovery."

"For us, over the next year, our work with the U.S. bishops and the development community, it's going to be imperative we get solutions to all countries of the world, especially the developing middle-income countries that are experiencing the crisis," he said.

LeCompte also called for more equitable distribution of vaccines worldwide through focused and expanded humanitarian aid. "Unless we act quickly, much of the developing world will not see vaccines until 2023," he said.

EarthBeat Weekly: Pandemic, storms call us to make peace with the planet

Faced with COVID and climate change, the world needs our Communion