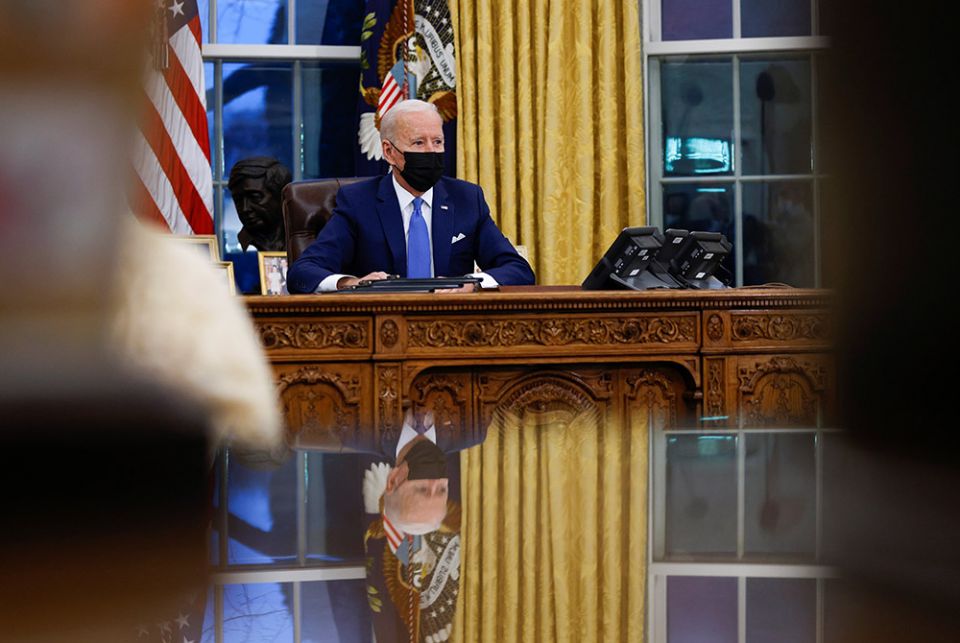 President Joe Biden and Vice President Kamala Harris met with 10 Senate Republicans this week to discuss the senators' concerns about the size of the COVID-19 relief package Biden has proposed. The meeting was apparently cordial but no deal was struck and, after it was concluded, White House press secretary Jen Psaki said that Biden had made clear "that he will not slow down work on this urgent crisis response, and will not settle for a package that fails to meet the moment."

If you listened closely, you could hear progressives throughout the country breath a huge sigh of relief.

As a candidate and in the weeks since his election victory, Biden promised to try and unite the country. He speaks easily and poignantly about his 36 years in the Senate and his ability to reach across the aisle and accomplish the nation's business on a bipartisan basis.

Biden was certainly correct in extending the invitation to the GOP senators and in giving them a full two hours in the Oval Office to share their concerns. The pictures of the meeting highlighted the return to decency and normalcy to the White House: Can you imagine any of those senators even wanting to spend two hours discussing public policy with former President Donald Trump?

Put differently, Biden learned from the failed efforts to secure Republican support for the Affordable Care Act back in 2009 and 2010. The Obama administration and congressional Democrats bent over backward to try and garner GOP votes. They jettisoned the public option. They entered into negotiations that dragged on and on, allowing Republicans to poison the well of public opinion in ways that led to their huge wins in the 2010 midterms. And, in the end, only one single Republican voted for the law in either chamber. Biden is not going to let that dynamic govern his actions with COVID-19 relief, and that is a great relief.

Democrats enter into negotiations for government action at a disadvantage. They are the party that believes government can and should be used to advance the common good. It is the Republicans who, since Ronald Reagan, have been the anti-government party. Every time Sen. Mitch McConnell would not even bring a House-passed bill to the Senate floor for a vote, the resulting gridlock strengthened the Republican argument that government was the problem, not the solution. Every time they succeeded in shrinking government spending, leaving needs unmet, the failed or inadequate policy drove home the point that government was unequal to the task.

As Catholics, of course, the social doctrine of our church has a foundational belief that government is essential to the right ordering of society and to working for the common good. The Second Vatican Council taught:

Men [and women], families and the various groups which make up the civil community are aware that they cannot achieve a truly human life by their own unaided efforts. They see the need for a wider community, within which each one makes his specific contribution every day toward an ever broader realization of the common good. For this purpose they set up a political community according to various forms. The political community exists, consequently, for the sake of the common good, in which it finds its full justification and significance, and the source of its inherent legitimacy. Indeed, the common good embraces the sum of those conditions of the social life whereby men [and women], families and associations more adequately and readily may attain their own perfection (Gaudium et Spes, Paragraph 74).

Such ideas might get you thrown out of today's Republican Party, although I do not think it would be wise to deny Communion to such people simply because they adhere more to Reaganite libertarianism than to Catholic social doctrine.

In a column at The Washington Post this week, E.J. Dionne makes a compelling case for forgetting about abstract calls to bipartisanship and unity. He urges people to examine what the shrunken GOP plan leaves out that the Biden plan accomplishes:

Argue all you want about spending and deficits and big government, but please don't pretend that what Biden has proposed is some sort of left-wing craziness. The stuff the Republicans chose to cut is compassionate common sense. And if you don't want to help local governments, consider how much the economy has already been hurt by layoffs of over 1 million public employees.

I do not recall Republican senators fretting about the deficits when they passed the Trump tax cuts, or any other tax cut for that matter.

Democracy can flourish when there is a principled commitment to compromise and bipartisan cooperation. Important projects like comprehensive immigration reform and environmental protection will need bipartisan support. Trying to restore a sense of bipartisanship to the conduct of foreign policy is an objective all politicians should seek.

However, our democracy has been so long assaulted by the distrust of government sowed by Reaganite libertarianism, maybe it will be better for the country if the Biden proposals pass on a more or less party line vote, and not just better because of the practical outcome of the proposals, but better for democracy per se.

Let Democrats be seen as the party willing to aggressively help people by using the power of government. Let the Republicans be seen as the party that doesn't, and let's see which the American people prefer. If the Democrats' plans lead to a worse economic future, the voters can and will hold them accountable. If the Democrats' plans succeed, perhaps the idolatry of the markets will cease to fascinate the American people, and that would be a very, very good thing.

The results of the 2014 election