The buffoonery of Abbott and Cuomo 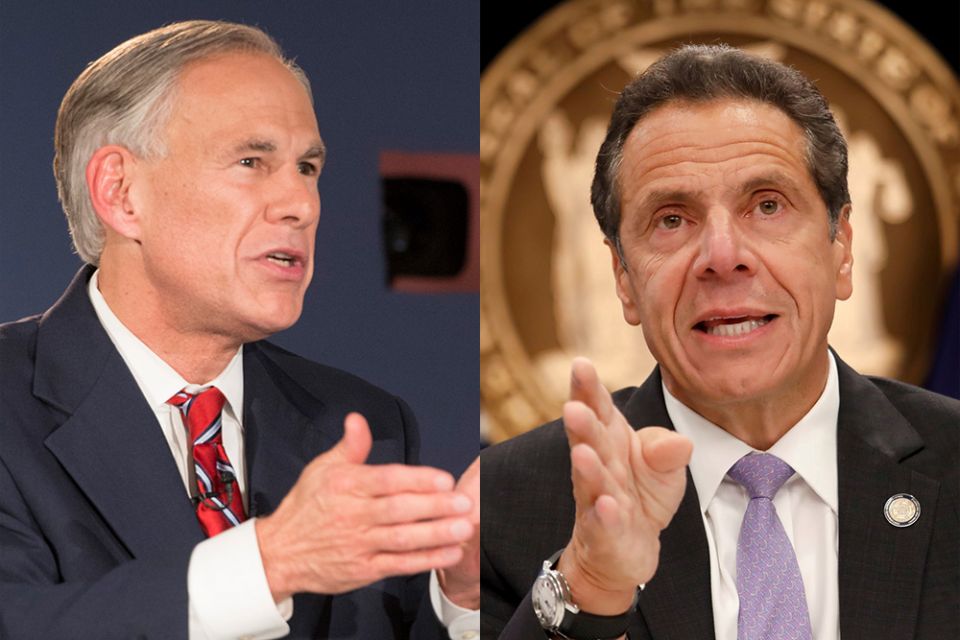 In the mid-20th century, the undisputed masters of slapstick were Abbott and Costello. Now, in the third decade of the 21st century, Abbott and Cuomo are providing the buffoonery. The difficulty is that it is not at all funny.

Gov. Greg Abbott of Texas announced on Tuesday that businesses in Texas would no longer be subject to any COVID-related restrictions, and if that were not enough, he was also ending the mandate to wear masks in public places. "Too many Texans have been sidelined from employment opportunities," the governor said. "Too many small business owners have struggled to pay their bills. This must end. It is now time to open Texas 100%."

He might have added that the 44,368 deaths of fellow Texans from COVID-19 were "too many," but why let a little thing like that get in the way of a good time.

Texans have not been having a good time lately. Last month, they were hit with the polar vortex like much of the rest of the country. Unlike the rest of the country, the cold led to a shutdown of power in much of the state. Why? Because the state has chosen to go it alone when it comes to energy, and not be tied in with the national grid, combined with the determined ideological commitment of the Texas Republican Party to deregulation. Abbott had tried to blame the outages on wind turbines freezing, but, of course, wind turbines are found in Canada, the North Sea and other areas prone to brutally cold weather so, as Texans say, that dog didn't hunt.

One suspects that one of the reasons for lifting the COVID-related restrictions was to change the subject. Instead, the decision reinforces Abbott's mishandling of the power outages. Those outages forced many thousands of Texans to flee to shelters or to bunk with friends, increasing the chances of COVID-19 transmission. In fact, while the number of new cases has been dropping nationwide, in Texas they have been going up the last two weeks, according to researchers at Johns Hopkins University. This is not the time to be lifting restrictions.

President Joe Biden rightly called Abbott's decision "Neanderthal thinking." I think that might be seen as a slur against our ancient ancestors.

Idiocy may blossom like bluebonnets in Texas politics, but Texas Republicans have not cornered the market. In New York, Democratic Gov. Andrew Cuomo decided to give a masterclass in cluelessness this year, and doing so on two distinct fronts.

First, there were allegations that Cuomo's administration covered up the number of people who died from COVID-19 at nursing homes. Of course, in the early stages of grappling with this pandemic, lots of mistakes were made, false assumptions sorted from sound, and even the perspective of the medical and scientific community was a work in progress.

Still, this allegation was heartbreaking. Last year, when the pandemic first hit our country, it hit New York hardest. And, in contrast to the stupidity and incompetence emanating from the White House, Cuomo's daily briefings demonstrated a grasp of the public health issues and basic competence in forging a response. It is not yet clear whether Cuomo was deliberately suppressing negative information, or if his staff was doing it on his behalf, but it is damning either way. The first scenario would indict his veracity and the second his competence.

In this day and age, government leaders need to know that there is no suppressing information and that they are guilty of malpractice if they do not empower their staff to tell them what they do not want to hear. His failure, whatever its source, makes us all feel a little silly for the accolades that were showered on him last year.

Then came allegations of sexual harassment. At a press conference Wednesday, Cuomo admitted that he had said and done things that were inappropriate. "I now understand that I acted in a way that made people feel uncomfortable," Cuomo told the assembled members of the press corps. Now? Well, duh.

Mores have changed in recent years, but this is wrong in any decade, even if it was far from exceptional 30 years ago. If Cuomo had asked a college classmate in the late 1970s about her sex life, he might have earned a blank stare or a "no comment," but that is different from asking someone who works for you and who is many years your junior about her sex life. And holding the face of a woman who is not your wife and asking if you can kiss her? After the #MeToo movement, these are also a variety of "Neanderthal thinking."

I am convinced that our culture has invested the words "I am offended" with way too much moral authority. But Cuomo is not charged with telling an off-color joke to a peer. If, in 2021, he did not know better, than he is as stupid in his way as Abbott was in his.

These two governors, from different parties and with different ideologies, are both Roman Catholic. As a church, one of the historic hallmarks of our faith has been our commitment to faith and reason. No "sola scriptura" for us. We do not deny evolution. We invented universities, for Pete's sake. Both Abbott and Cuomo need to go back to school and learn some basics: about public health, about public leadership and about public decency.

Column | The buffoonery of Abbott and Cuomo

What does it mean to be father to a son in the age of #MeToo?