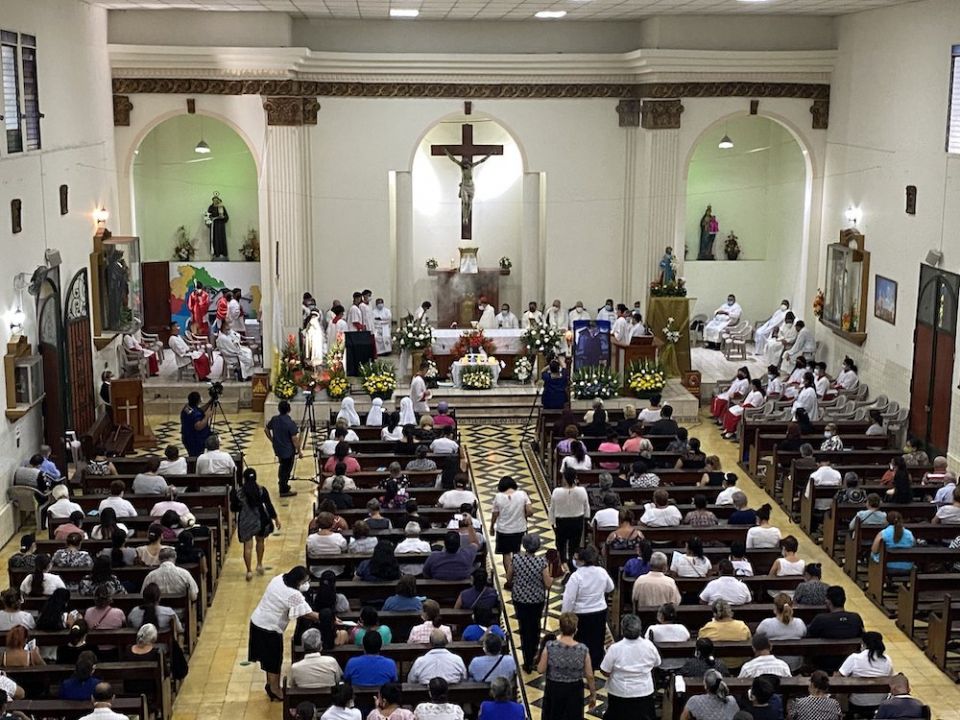 Parishioners gather for a memorial Mass for Fr. Estefan Turcios, head of El Salvador's pontifical mission societies, May 21, 2021, at San Antonio Church in Soyapango, El Salvador, where he pastored working-class Salvadorans for 34 years. The beloved priest, who also was director of the human rights office for the Archdiocese of San Salvador, died May 8, 2021, one of more than 2,000 Salvadorans to reportedly die of COVID-19. (CNS/Rhina Guidos)

Soyapango, El Salvador — A swath of shrink wrap held the priest's cassock tight to the coffin as the four men, in what looked like white space suits, lifted it toward the pastor's final journey May 11, on a funeral gurney through the main doors of the church that had been his home for 34 years.

During the war in the late 1980s, a white flag hanging from his pickup, he took off from church with food and Communion to tend to his flock locked inside their homes.

"He said he had to feed them even as the bullets flew," said Angelita Molina, the housekeeper at San Antonio's parish house since 1987.

Back then, even though he'd been tortured by soldiers, he went up against them when a statue of a saint popular among his flock went missing after military occupied the church in 1989.

He walked into the military post and got the statue back.

But it was the coronavirus, ubiquitous and relentless in Soyapango for the last 13 months, that ended the life of the beloved pastor May 8.

"We love you, Father Estefan," a woman shouted from a large crowd of parishioners and friends that gathered May 11 to cheer his last entrance to the church, where he had joyfully celebrated with them baptisms and weddings and dried tears during funerals. This time, however, the welcoming gates to the entrance quickly slammed to prevent the crowd, desperate to see the pastor, from entering as the truck carrying his coffin drove in.

Strict measures for COVID-19 funerals in El Salvador prevent more than two people at a burial, but in Turcios' case, that became more complicated because his last wish, which parishioners carried out, was to be buried at his beloved church, meaning additional funeral home personnel had to be present to lower the coffin into an unusual indoor space.

The country's Ministry of Health had to approve the burial, and only a priest in a sanitary gown with his head covered was allowed near the coffin to offer the prayer for the dead before it was lowered into the ground, just below a crucifix of a Christ crafted in dark wood.

Like those he pastored, for decades Turcios had been surrounded by death, either from the war or gang violence. He railed against both kinds of aggression, which drained his Christian community over the years as many parishioners migrated, seeking better fortunes or more peaceful surroundings in the U.S. or Europe. 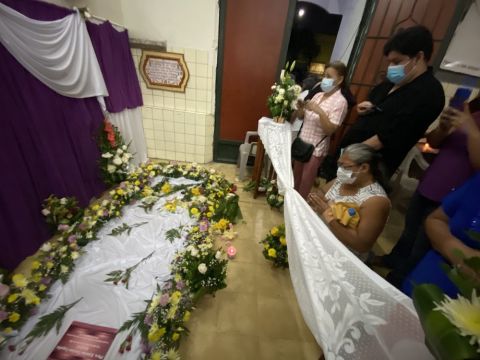 One of them was former parishioner Estela Barahona Lopez, who moved to Italy. She often talked to Turcios by phone and would see him when he traveled to Rome for meetings after he became the head of El Salvador's pontifical mission societies in 2014.

"He was more than family," said Barahona, who lives in Milan. "I spent more time with him than with my own family."

Outside the church, with few choices available to mourn him, parishioners filled a large blackboard with photos of themselves with the pastor, at outings with families, baptisms, marriages, during the outdoor processions he so loved. Some featured the pastor in happier times with lay ministers who also had died of COVID-19.

In October 2020, Turcios said he decided to stop counting how many people in his parish had died from COVID-19 because it started taking an emotional toll on him, but on All Souls' Day 2020, he featured photos of them, which he had other parishioners carry in an outdoor procession.

Though his main charge was to tend to the parish, he also was the head of the Archdiocese of San Salvador's evangelization efforts, the episcopal vicar of the permanent mission for the archdiocese as well as director of the human rights office and adviser to the archbishop.

"He was like an octopus, that Father Estefan. He had a lot do and yet he always seemed to do it all well," said Salvadoran Cardinal Gregorio Rosa Chavez, who presided Mass at San Antonio parish May 21.

Priests joked during an earlier Mass at San Salvador's cathedral that they now would have to look for four priests to manage the workload he left behind at the archdiocese. 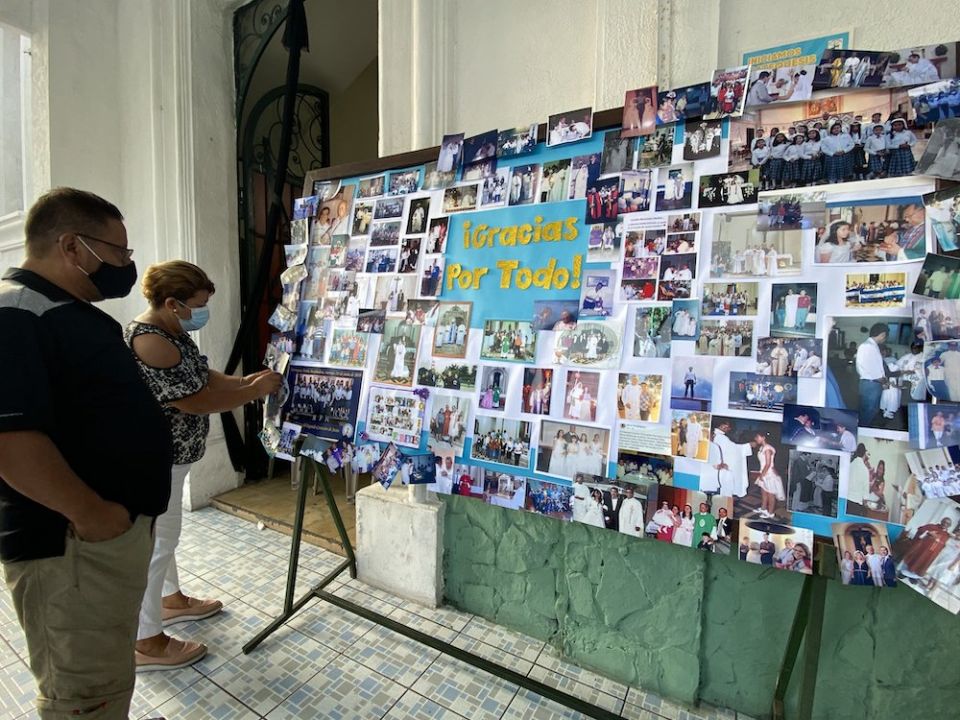 Parishioners Manuel and Lucy Bonilla post photos on a board at San Antonio Church in Soyapango, El Salvador, before a memorial Mass for Fr. Estefan Turcios, May 21, 2021. (CNS/Rhina Guidos)

Because of his tireless and constant contact with people, hundreds showed up to join parishioners who lined the roads on the route the priest took during processions, hoping the hearse would drive by so they could say goodbye. Local police, however, decided to take the shortest route possible, dodging hundreds of mourners except for those who had gathered outside the church's main gates and who applauded and cheered as his body arrived home.

Past the gates of the church, a military band played in the parish parking lot as the coffin was wheeled inside. The church — which he'd been so happy to see fill back up again as his flock began losing fear of the coronavirus — was empty.

Less than a month before, many had been happy that he'd received the first shot of the CoronaVac, a Chinese version of the vaccine against the coronavirus that the Salvadoran government has administered to much of the population. Though his first dose had been on April 14, by April 20 he'd started feeling symptoms of what seemed like a flu. A week later he was hospitalized and a little more than a week after that, he was dead.

The last image of his earthly journey was the aqua blue design on his favorite cassock, which shined in the light before a cement cover sealed the crypt.

"Today your pastor carries you in his heart and in his cassock, the community for whom he worked hard," Cardinal Rosa Chavez said at the Mass ending the funeral rites. "In his cassock he carried you with him, the community he espoused ... and we are here with him, celebrating intensely as a family." 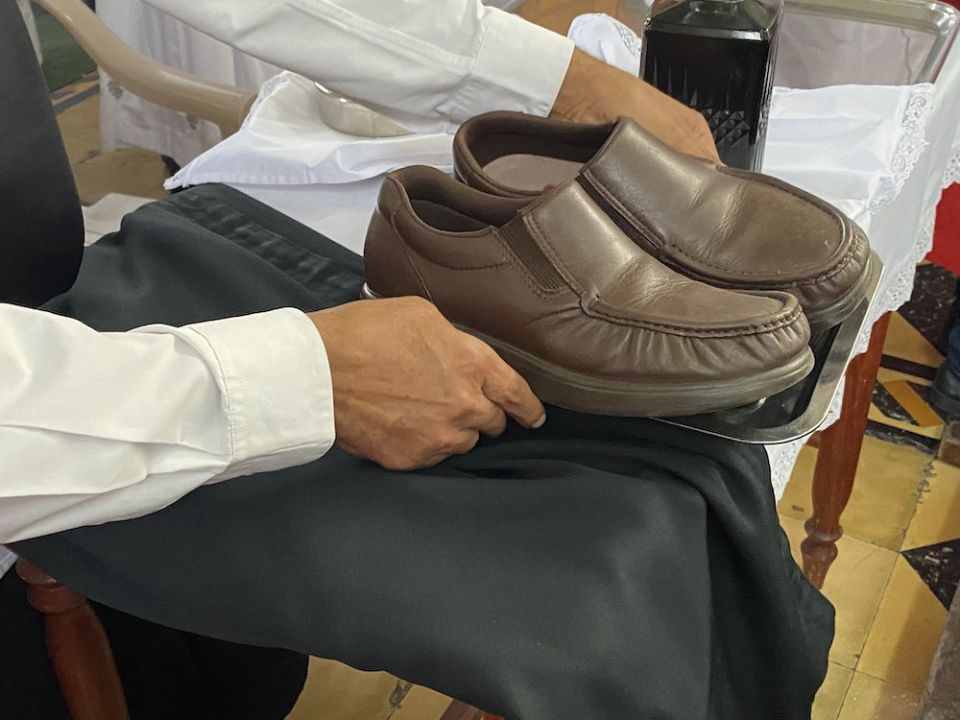 A parishioner prepares the shoes of Fr. Estefan Turcios, head of El Salvador's pontifical mission societies, for the offertory during a memorial Mass May 21, 2021 at San Antonio Church in Soyapango, El Salvador. (CNS/Rhina Guidos)