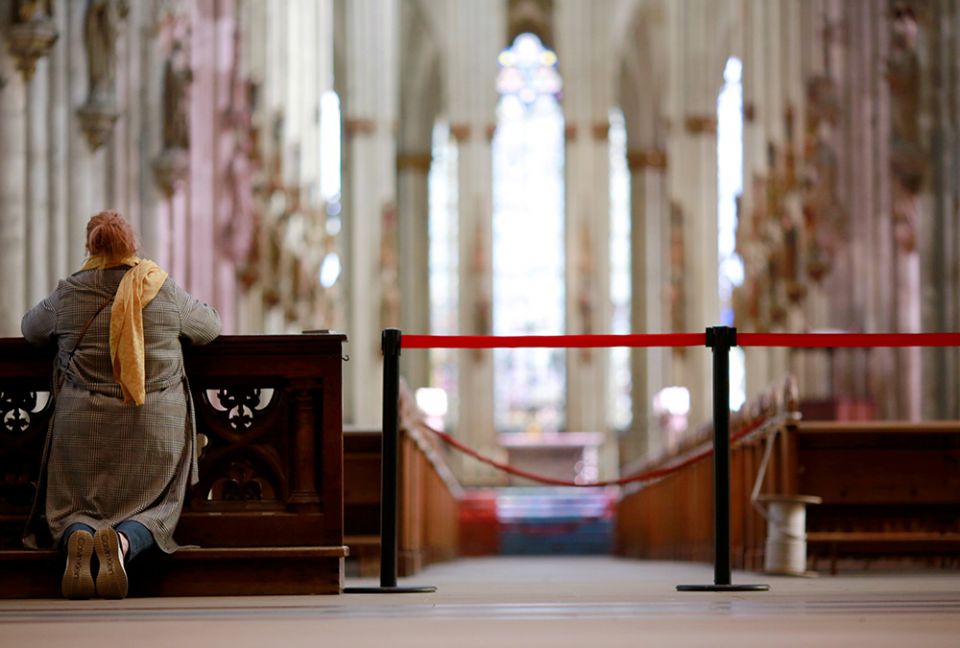 A woman prays alongside a barrier inside the Cologne Cathedral in Germany March 15, 2020, during the COVID-19 pandemic. (CNS/Reuters/Thilo Schmuelgen)

Oxford, England — When Spanish parliamentarians passed a law allowing euthanasia and physician-assisted suicide in the run-up to Easter, it was the latest in a program of radical measures that has set the country's Socialist-led government against its once-powerful Catholic Church.

Despite a year of bitter controversies, Spain's bishops have maintained a conciliatory stance, pledging dialogue and cooperation where possible.

There and elsewhere across the 27-country European Union, however, there have been complaints that coronavirus restrictions are being used to push through measures that could compromise religious rights. 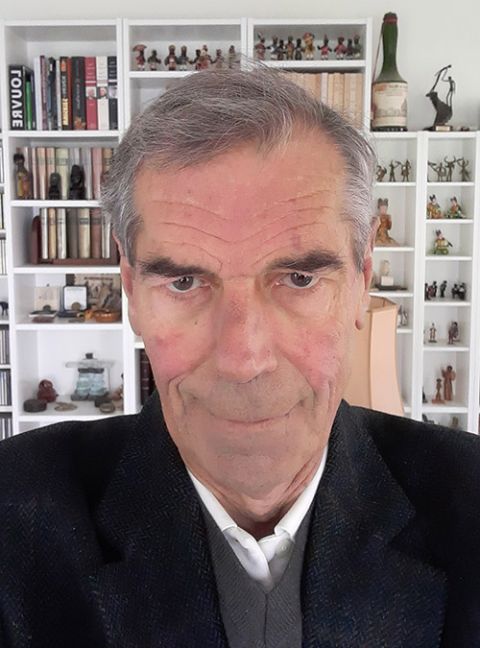 "There are real anxieties that the lockdowns are being exploited as a pretext for new restrictions," Antoine Renard, international administrator of France's Association of Catholic Families, told NCR.

"It often seems politicians no longer understand the importance of religion," said Renard. "Against this, Catholics will have to be very clear about their rights and use all legal possibilities to defend [themselves]."

Fears of an incremental assault on religious freedom have long been expressed by church leaders in Europe, where antireligious incidents are logged by the Vienna-based Observatory on Intolerance and Discrimination Against Christians, and publicized by human rights bodies such as the European Centre for Law and Justice.

Such fears were voiced at the mid-March plenary of the Brussels-based Commission of the Bishops' Conferences of the European Union, after talks with Margaritis Schinas, a vice president of the EU's executive branch.

Negative perceptions of faith were being fueled by a "rise in religious illiteracy," the commission warned on March 19, saying it is essential for Christians to maintain dialogue with public authorities and to avoid "self-censorship."

The meeting with Schinas took place under Article 17 of the 2007 Lisbon Treaty, which requires the EU to maintain an "open, transparent and regular dialogue" with Europe's churches.

Yet the uneasiness looks set to persist.

In an annual speech to the Vatican's diplomatic corps in February, Pope Francis warned 182 ambassadors accredited to the Holy See that efforts to contain COVID-19 had "impacted various fundamental freedoms, including freedom of religion." 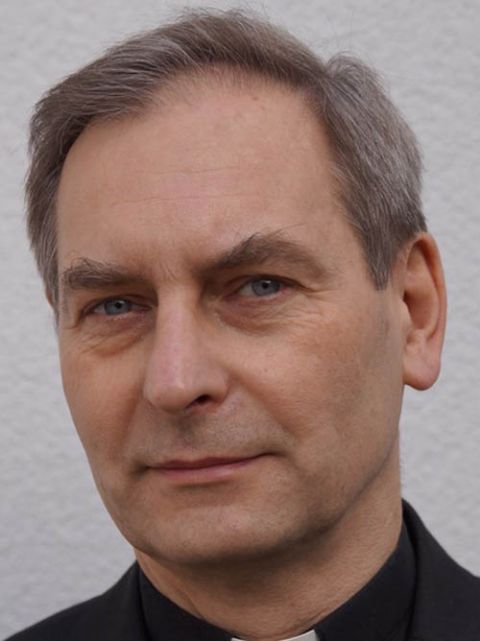 Fr. Piotr Mazurkiewicz, a Polish theologian and political scientist who was secretary-general of the EU commission of bishops' conferences from 2008 to 2012, said the past year had shown "a distinction between countries with a friendly attitude to faith, and those where the political culture is hostile to religion, seeing it as more harmful than helpful to the organization of the state."

"The EU's institutions currently side very strongly with the ideology of secularization, treating this as normative," Mazurkiewicz told NCR. "Some governments are actively pushing it, convinced a secularized society will be more modern and efficient than a religious one."

Some EU nations have been careful not to interfere with religious freedom, allowing church services to continue, with number limits and sanitary precautions.

In Poland, where more than 55,000 coronavirus deaths have been reported, close to twice the European average, Prime Minister Mateusz Morawiecki tightened lockdown curbs after warning that 70% of hospital beds were full.

However, churches stayed open for Holy Week and Easter, while the government urged Catholics to only gather with their immediate families but did not decree travel restrictions.

In neighboring Germany, an Easter lockdown was announced on March 23, but revoked as a "mistake" a day later by Chancellor Angela Merkel, after complaints from churches and the country's federal interior minister, Horst Seehofer.

In predominantly Orthodox Romania, meanwhile, where overnight road traffic is currently banned, places of worship have also remained open, after what a Bucharest Patriarchate spokesman, Vasile Banescu, said had been "absolutely obligatory dialogue" with government officials.

In Slovakia, where a total ban on public worship since January was extended on March 17, church leaders are backing a Constitutional Court appeal by the procurator-general, Maros Zilinka, after accusing Prime Minister Igor Matovic's center-left government of ignoring their complaints.

Several government ministers have criticized the worship ban, while a former foreign minister and European commissioner, Jan Figel, has also appealed to the European Court of Human Rights, accusing Matovic of violating human rights with the harshest restrictions in Europe.

"Ignoring the church's fundamental demands has become unsustainable — however, the state is constantly prolonging the complete lockdown of religious life", the president of Slovakia's bishops' conference, Archbishop Stanislav Zvolensky, said in a late March statement.

"We strongly disagree with this excessive interference in our country's religious life in the country and are convinced this a disproportionate restriction," said the archbishop.

In Scotland, the supreme civil court, or Court of Session, ruled in late March that the nationalist devolved government had acted unlawfully in closing churches, infringing religious freedom under the 1950 European Convention on Human Rights.

"What's striking is the variety of steps taken by EU governments — whereas some have sought agreement with church hierarchies, trusting them to ensure safety in their own sacral spaces, others have ordered the locking of churches," Mazurkiewicz told NCR. 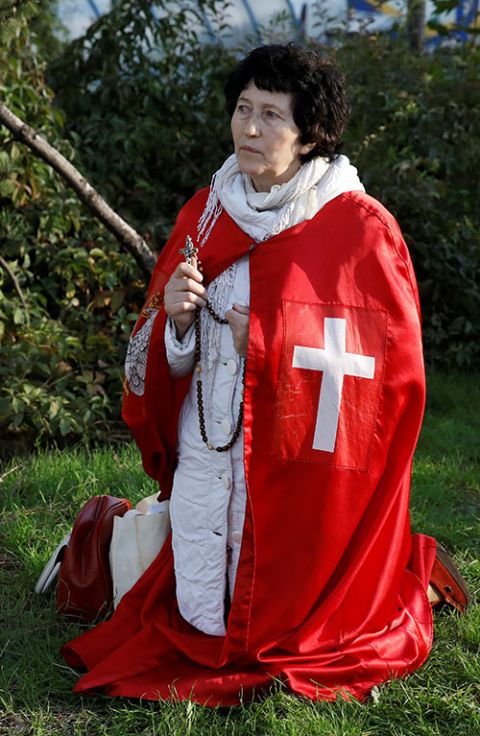 A demonstrator prays holding a rosary during an Oct. 24, 2020, rally in Warsaw, Poland, against measures imposed by the Polish government to stem the spread of the coronavirus. (CNS/Reuters/Kacper Pempel)

"Religious freedom occupies a special place in international law, and can only be restricted in unique circumstances as a final resort," said the priest. "But many top officials seem to have decided religion isn't important for well-being and can't be considered a feature of the common good."

Mazurkiewicz thinks some governments have been guilty of blatant discrimination.

In France, shops were permitted one customer for every six square meters, whereas even large churches were allowed only 30 worshippers — amounting to one for every 200 square meters.

Government officials were unable to explain or justify the space limitation when France's supreme administrative court, or Conseil d'État, ruled they had violated the country's constitution last December.

However, French churches have had other worries to contend with.

A new "Law on Separatism," tabled in December by Prime Minister Jean Castex, will "strengthen respect for the principles of the Republic" by empowering regional governors to compile fuller data on religious groups, and requiring foreign donations to be officially registered.

The law is intended to compel Muslim associations to comply with France's 1905 law on church-state separation, and to "prevent dangerous drifts," after a spate of bloody attacks, including the January 2015 massacre at the satirical magazine Charlie Hebdo, and the brutal July 2016 Islamist murder of an elderly Catholic priest, Fr. Jacques Hamel, during Mass at his Normandy church.

Claims that the law will endanger religious freedom were dismissed March 15 by France's interior minister, Gérald Darmanin, who told the Le Figaro daily that the 1905 separation law had already been modified 23 times without any infringement of its "grand principles" of liberty.

However, Christian, Muslim and Jewish leaders have criticized the law in testimonies before the National Assembly, warning it will upset France's secular republican ethos.

"From a law that enunciates conditions for freedom and lets this freedom be exercised, we are making a law with multiple constraints and controls," Archbishop Éric de Moulins-Beaufort, the bishops' conference president, said in a joint March appeal with France's Protestant and Orthodox leaders.

"This draft law, whatever its intentions, risks undermining fundamental freedoms of worship, association, education and opinion, already abused by a thought police installing itself more and more in the public sphere," said the appeal. 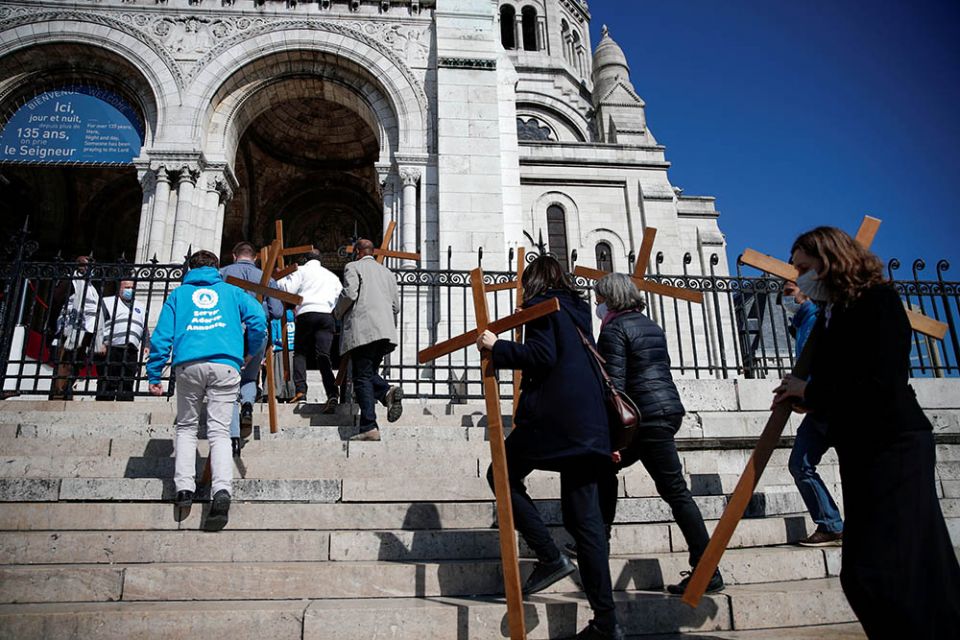 Despite the criticisms of the French law, parallel measures are planned in Denmark, where religious associations are now also required to submit detailed accounts. Religious personnel, including native-born Catholic and Lutheran clergy, are also to take a course in "understanding democracy and freedom."

A new "Law on Sermons," backed by the Social Democrat-led government of Prime Minister Mette Frederiksen, will also oblige religious communities, including Denmark's 270,000 Muslims, to deliver all public statements in Danish.

In October, Denmark's Council of Churches, whose 16 member-denominations include Catholics, told Frederiksen that the law would damage the country's international image by making faith traditions "hostages to a simplistic understanding of religion and religious practice."

Cardinal Jean-Claude Hollerich, president of the Commission of the Bishops' Conferences of the European Union, has similarly warned of an "undue hindrance" to religious liberty, which is also protected by the EU's 2000 Charter of Fundamental Rights.

"This development is part of a broader, increasing trend of neglect for religious freedom in EU member-states," Hollerich said in a January statement.

"While we understand the goal is to prevent radicalization and counter incitement to hatred and terrorism, any negative or discriminatory impact should be avoided with regard to churches and religious communities that are averse and alien to such actions," said the cardinal.

In Spain, the new euthanasia law, passed on March 18, will come into force this summer, making the traditionally Catholic country Europe's fifth to allow the practice.

Legislation to allow euthanasia is pending elsewhere, and was blocked in nearby Portugal by a February presidential veto, which could soon be overturned.

Such moves have fueled fears that politicians, emboldened by the latest lockdowns, are pushing through secularizing agendas, while clinging to newly expanded powers in the face of public inertia and an eroded democratic culture. 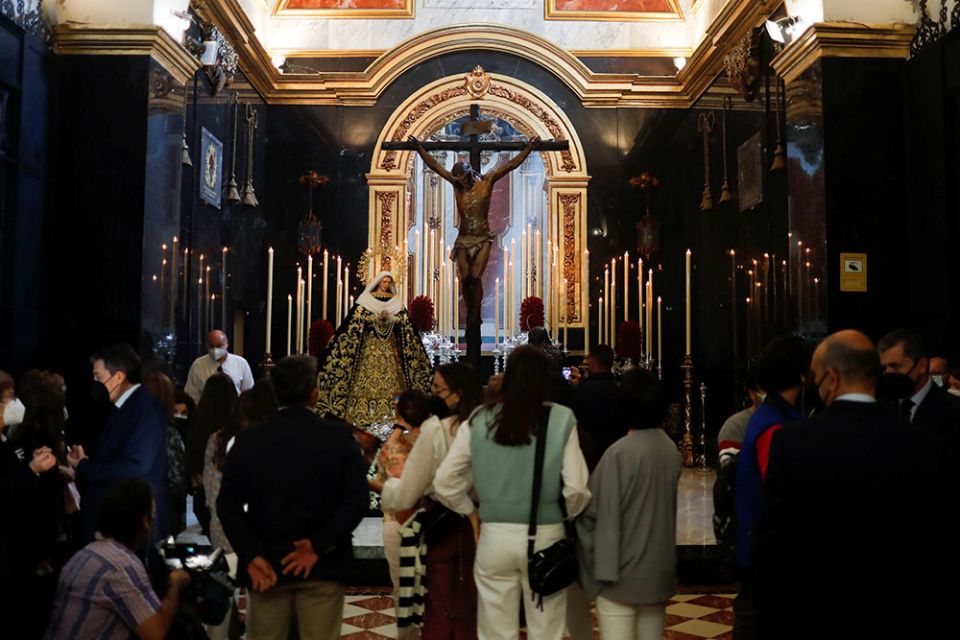 People take photos on Holy Thursday, April 1, inside a church in Malaga, Spain, after Holy Week processions were canceled during the coronavirus pandemic. (CNS/Reuters/Jon Nazca)

"There's no doubt deliberate efforts are underway to discredit the whole idea of religion — while ordinary people may be little affected, hostile politicians will feel themselves supported by law and history in their attacks," said Renard, the French Catholic Families Association administrator.

"Of course, freedom of conscience will still be protected by national constitutions," he said. "But Catholics, especially when in a minority, will have to understand the challenges facing them — especially when the EU's institutions show little sympathy."

He thinks countries like his, with lively, self-confident churches, can still present alternative models of social and political organization to those predominant in Western Europe, and challenge the "determinist assumptions" that characterize Western thinking, even among Catholics.

"It's very widely felt that nothing can be done: European societies are fated to become ever less Christian and ever further removed from their Christian traditions," said the priest. "We can offer a testimony against this."

"The fact that the highest courts have exposed legal abuses shows democratic mechanisms are still being applied, even in emergency conditions," he said. "But current warnings are justified — not just about religious freedom, but about the whole future of civil liberties."

A version of this story appeared in the April 30-May 13, 2021 print issue under the headline: European Catholics fear erosion of religious freedom .